Shamcey Supsup reveals her boyfriend changed his religion for her

Miss Philippines Shamcey Supsup, who was named third runner-up in the 2011 Miss Universe pageant, was probably destined to answer the question, "Would you change your religious beliefs to marry the person that you love?" 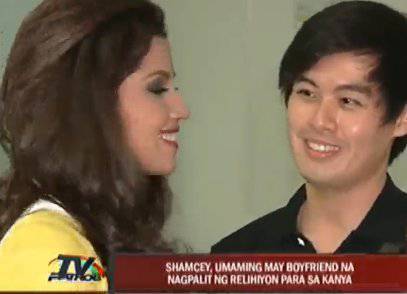 Is this the man who changed his religion for Shamcey Supsup? Though she admitted that she is in a relationship, Supsup has not named her boyfriend in any of her interviews. However, this video clip implies that this may be the guy. (Screenshot from ABS-CBN’s TV Patrol)

Miss Philippines Shamcey Supsup, who was named third runner-up in the 2011 Miss Universe pageant, was probably destined to answer the question, "Would you change your religious beliefs to marry the person that you love?"

Supsup had answered, "If I had to change my religious beliefs, I would not marry the person that I love because the first person that I love is God who created me and I have my faith and my principles and this is what makes me who I am. And if that person loves me, he should love my God too."

That being said, Supsup recently revealed that her boyfriend "changed his religious beliefs for her."

ABS-CBNNews.com reports that Supsup, speaking to ABS-CBN’s Umagang Kay Ganda, said her boyfriend is a former Catholic who now shares her faith. "At first (he was not a Christian)," she said. When asked if if he converted religion for her, she said: "Yes."

"My mom is really strict. She always tells me na, dapat yung magiging boyfriend or asawa ko should be a Christian first, and that our relationship will be centered with God," Supsup explained.

She also added that she had no plans of hiding her relationship. She quipped, "Di ako showbiz eh. I want people to know about it."

For more on thsi story, log on to ABS-CBNNews.com.