GMA News Online, citing an article posted on Spanish news site ABC Internacional, reports that Filipino butler Rogelio de los Reyes guarded the residence of the Spanish envoy in Tripoli even after all its occupants fled amid the violence in Libya. 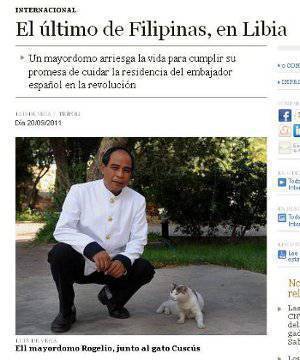 GMA News Online, citing an article posted on Spanish news site ABC Internacional, reports that Filipino butler Rogelio de los Reyes looked after the residence of the Spanish envoy in Tripoli even after all its occupants fled.

De los Reyes-who is one of more than 2,000 Filipinos who remained in Libya despite the chaos in the North African state-has been working in the residence of the Spanish ambassador for six years.

The house was evacuated by the Spanish ambassador and the Spanish Embassy was shut down in March when the Libyan revolution against former leader Muammar Gaddafi intensified. De los Reyes chose to stay behind to protect the estate. Only a cat named Cuscus kept him company for nearly six months.

De los Reyes revealed that, at one point, 15 armed men came and took three of the six cars parked inside the compound. Shortly after the armed men left, De los Reyes sought assistance from some anti-Gaddafi forces who were in the area. With their help, two of the three cars were returned within an hour. The third car was found abandoned on the street.

When asked why he chose to stay in the compound despite everything, De los Reyes merely said, "I promised that I would stay and take care of the house. It was my obligation."

Rogelio De Los Reyes Muammargaddafi Libya
Your Guide to Thriving in This Strange New World
Staying
In? What to watch, what to eat, and where to shop from home
OR
Heading
Out? What you need to know to stay safe when heading out