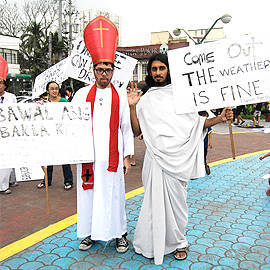 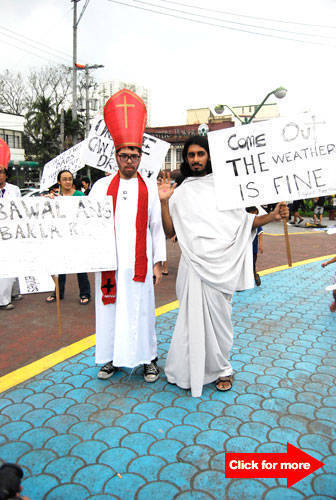 Participants in this year’s pride march paraded for equal rights, the passing of the Anti-Discrimination Bill, and HIV and AIDS awareness. Click for more.

(SPOT.ph) About 77 groups and organizations with approximately 1,700 participants joined this year’s Manila Pride March dubbed "Pride of the Orient" held in Malate, Manila on December 3. The march, organized by Task Force Pride Philippines, commemorated the achievements of the Filipino Lesbian, Gay, Bisexual, and Transsexual (LGBT) community since the first Manila pride march in 1994.

Check out this short film by Task Force Pride Philippines for this year’s pride march.

Anti-LGBT groups and protesters were also present carrying signs bearing Bible verses. Some of them used megaphones to relay their messages to members of the LGBT community.

After the march, there was a program which included a fashion show by designer Yako Reyes featuring LGBT models, audio-visual presentations from different organizations, performances, speeches from group leaders, a four-season pageant titled "Ultimo Icono," and an awarding ceremony. The program was followed by a street party organized by Mentorque Productions.

Pride Of The Orient: The 2011 Manila Pride March Manilapridemarch Gayprideinmanila Filipinolgbt Lgbt Malatepridemarch Pridemarch2011 Gaypride
Your Guide to Thriving in This Strange New World
Staying
In? What to watch, what to eat, and where to shop from home
OR
Heading
Out? What you need to know to stay safe when heading out