CHECK IT OUT: Chuck's Grub Fish 'n' Chips at the Power Plant Mall
Loading
Already a member? Log in
No account yet? Create Account
Spot.ph is your one-stop urban lifestyle guide to the best of Manila. 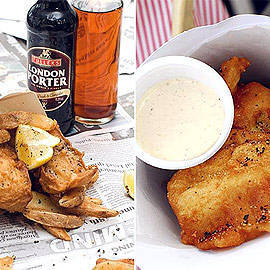 CHECK IT OUT: Chuck’s Grub Fish ’n’ Chips at the Power Plant Mall 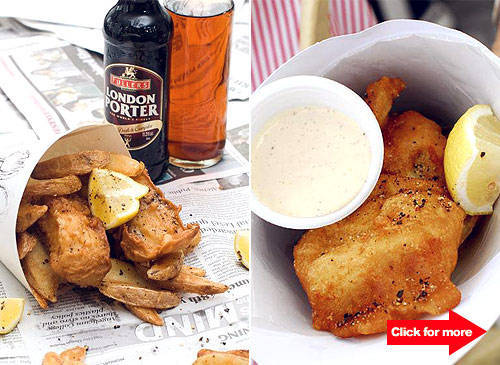 Get British-style fish and chips here. Click for more.

(SPOT.ph) Good fish and chips, cooked British-style, is not the most common food find in Metro Manila. Chuck’s Grub, a stall in Rustan’s Supermarket at the Power Plant Mall, hopes to fill that gap. Starting out as one of the most-visited stalls at Mercato Centrale (the business was then called Chuck’s Grubberie), Chuck’s Grub’s new Power Plant stall lets fish and chips fans have their fill of their tasty treats any day of the week.

Taking inspiration from Geale’s, a fave "chippie" in Notting Hill, the husband-and-wife team of Enrique Valles and Isha Andaya-Valles set out to serve the popular British dish just the way it’s done in the UK: chunks of fresh fish sprinkled with ground salt and pepper, smothered with beer-laced batter, and served in paper cones. Says Isha, "It took us about six months to develop a batter we were happy with-it forms a crisp crust around the fish, letting the meat steam inside, allowing for a softer fish texture. This was just in time to start selling at Mercato Centrale in January 2011 and we were so pleased to have been well received on our first weekend there."

Chuck’s Grub serves four kinds of beer-battered fish all served with freshly fried, skin-on potato wedges: Dory, the crowd favorite; Snapper with a firmer bite and stronger fish flavors; Cobbler, a white fish with a semi-creamy texture; and Halibut, a premium fish high on Omega 3. The Fish & Chips come with your choice of dip: cane vinegar, a local but still zingy substitute for the traditionally-served malt vinegar, garlic mayo, and a tartare sauce. Adds Isha, "I think we’re the only ones who offer just fish and chips, which is why we really made an effort to make our product good. We make sure the recipe stays true to its origins."

Fish & Chips Chuck’sgrub Chuck’sgrubberie
Your Guide to Thriving in This Strange New World
Staying
In? What to watch, what to eat, and where to shop from home
OR
Heading
Out? What you need to know to stay safe when heading out