UPDATED: New DOT slogan is "It's more fun in the Philippines," new logo also unveiled
Loading
Already a member? Log in
No account yet? Create Account
Spot.ph is your one-stop urban lifestyle guide to the best of Manila.

ABS-CBNNews.com reports that netizens started speculating about the new Department of Tourism DOT) slogan after Secretary Ramon "Mon" Jimenez posted some hints on his Twitter page. His username is @MonJQuotes.

The screenshot of the new DOT logo, a take on the banig, as posted on Rappler.com.

Interaksyon.com reveals that the new Department of Tourism (DOT) slogan is: "It’s more fun in the Philippines." The report said it will "brand the new Philippine tourism campaign to be rolled out in international markets starting April this year."

In an exclusive briefing for InterAksyon.com prior to the public launch of the campaign on Friday, January 6, DOT Secretary Ramon "Mon" Jimenez Jr. explained that "the slogan created by advertising firm BBDO Guerrero|Proximity Philippines, answers the fundamental question, ’Why the Philippines?’"

Jimenez pointed out: "What differentiates the Philippines from every [other place] in the world, as we said from the start, is the Filipino. [It’s] his special gift for transforming what is already a beautiful place into an unforgettable special place. You take two identical islands, put Filipinos in one, it's going to be more fun there."

Interaskyon.com also revealed that a new DOT logo, which is a "banig weave that forms the map of the Philippines, was also unveiled.  The report again quoted JImenez, who said, "It’s very colorful, very graphic, sa biglang tingin [at first glance], it’s a pixelized version of the map. It has that very modern feel also." Jimenez said President Benigno S. Aquino III also gave his inputs on the colors.

In an earlier ABS-CBNNews.com report, it was revealed that netizens started speculating about the new DOT slogan after Jimenez posted some hints on his Twitter page. His Twitter username is @MonJQuotes. 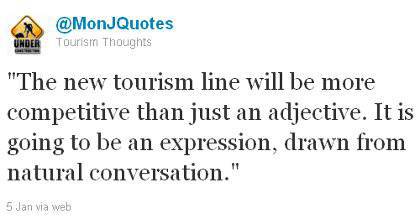 For more on this story, log on to ABS-CBNNews.com, Interaksyon.com, and Rappler.com.

Dot Departmentoftourism Tourismslogan
Your Guide to Thriving in This Strange New World
Staying
In? What to watch, what to eat, and where to shop from home
OR
Heading
Out? What you need to know to stay safe when heading out