UPDATED: Gloria Macapagal-Arroyo writes 9-page paper criticizing P-Noy, slams him for his "lethargy" and for "encourag
Loading
Already a member? Log in
No account yet? Create Account
Spot.ph is your one-stop urban lifestyle guide to the best of Manila.

UPDATED: Gloria Macapagal-Arroyo writes 9-page paper criticizing P-Noy, slams him for his "lethargy" and for "encourag

An article supposedly written by former president and current Pampanga Rep. Gloria Macapagal-Arroyo has been posted online via Scribd, which is described as "a social publishing site" where "people share original writings and documents." 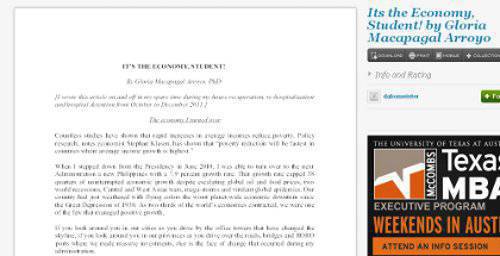 Yes, former president and current Pampanga Rep. Gloria Macapagal-Arroyo really wrote this paper. Though, at first, we couldn’t believe that (considering where she is now) she would dare write a such a "non-flattering" assessment of the Aquino administration. (The full version of the paper is embedded on this page.  See below.)

Jurado is Arroyo’s former economics professor at the University of the Philippines (UP). GMA News Online’s Andreo Calonzo noted: "The paper was read at a ’colloquium’ at the Manila Hotel called for the purpose by Arroyo’s staff."

The paper has been posted online via Scribd, which is described as "a social publishing site" where "people share original writings and documents." The Arroyo-authored paper opens with an explanatory note from the author, which reads, "I wrote this article on and off in my spare time during my house recuperation, re-hospitalization and hospital detention from October to December 2011."

The introduction of the paper establishes Arroyo’s ccomplishments, while the next segments basically enumerate of what the author thinks are President Benigno "Noynoy" Aquino III’s shortcomings. Arroyo’s accomplishments are used as points of comparison for the so-called "complaints" against the Aquino administration. The nine-page paper even contains graphs to illustrate the author’s arguments.

One passage reads: "Neither the President nor anyone else can truly expect to govern the next five years with nothing but a sorry mix of vilification, periodically recycled promises of action followed by lethargy, backed up by few if any results, and presumptuously encouraging gossip about one's love life in which no one can possibly be interested."

For more on this story, log on to "Scribd and read the full version of "It’s the Economy, Student!"

Noynoy Aquino Gloriamacapagal-arroyo Gma P-noy
Your Guide to Thriving in This Strange New World
Staying
In? What to watch, what to eat, and where to shop from home
OR
Heading
Out? What you need to know to stay safe when heading out