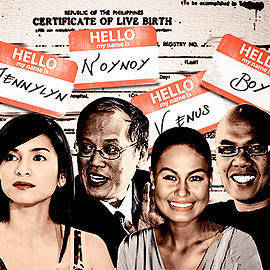 The names we love to use often confuse non-Pinoys. 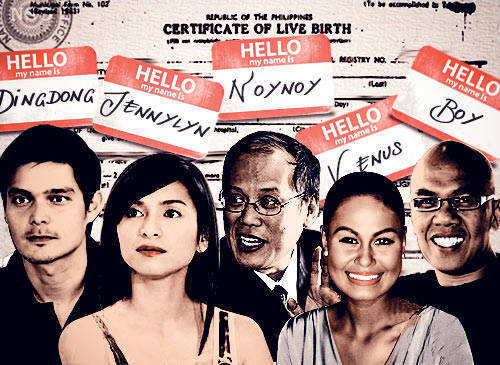 (SPOT.ph) When it comes to naming kids, we’re in a league of our own. The names we think are wonderfully amusing often confound non-Pinoys. In her article, "Playful Filipino names hard to get used to," BBC News writer Kate McGeown writes: "Bizarre and often unflattering names are as quintessentially Filipino as the country’s Catholic faith, friendly smiles, former U.S. military jeeps known as jeepneys, beautiful beaches and love of karaoke." She goes on to point out, "These names are found in all sectors of society. Sometimes they are nicknames, sometimes genuine first names-but they are always what people are referred to on a day-to-day basis."

To illustrate foreigners’ reaction to Pinoy names, you have to read A Bugged Life blogger Jayvee Fernandez’s post about his friend named Tonton, who got temporarily banned from Facebook because the administrators thought he was up to no good because his named didn’t seem real to them.

With that in mind, we listed 10 recurring pattens that Pinoys use to name their kids.

If I were a Boy. TV host-talent manager Boy Abunda is one of the most popular Boys around.

Premise: You don’t have to wrack your brains trying to come up with a name for your offspring. Let nature decide for you. If the kid is a boy, call him "Boy." If she’s a girl, she’ll be known as "Girlie." Girls may also be named "Lady." (Although we have not come across anyone named "Gentleman," yet.)

Unisex variation: If the kid is your youngest child or you think the kid could be your youngest, regardless of sex, you can call him or her "Baby." Just ask former TV host Baby O’Brien (actress Paraluman’s daughter) and coach Baby Dalupan.

H marks the spot. In the case of Vhong Navarro and Jhong Hilario, maybe the letter "H" stands for "hot dance moves."

Premise: For some reason, many of us think that we can jazz up an otherwise-normal name with an added "H." We’ve met a number of Jhoannas, Rhays, and Jhays. Just what is it about the letter "H"?

Time of H-insertion variation: Sometimes, it’s the person with the name who inserts the letter "H" as soon as he or she is old enough to do so. This usually happens when the person thinks his or her name is "too common."

Card game. We wonder if Senator Joker Arroyo was ever bothered that his brother Jack has a higher card value?

Premise: If family is very important to you, make sure that everyone knows that you all go together by naming your kids in sets.

Timeless variation: If the dad is a Sr., then his name is passed on through a Junior, III, IV, and so on. For girls, use the name "Maria" and then just choose a different second name so people can tell her apart from her mother or other "Maria" relatives (usually siblings). Example: Sisters named Maria Anna, Maria Fe, Maria Donna, and so on.

Ring him up. His real name is Jose Sixto Raphael Gonzalez Dantes III, but he chose the bell moniker "Dingdong" as his screen name.

5. For Whom the Bell Tolls.

Premise: Names whose sounds are akin to bells are very common. Could it be because for over 300 years, Pinoys were practically governed by the Church? The Spanairds, after all, used religion as a tool to colonize the country.

Repeat variation: Many Pinoy names are repetitions of a similar syllables. Case in point: Noynoy Aquino, Junjun Binay, and Jojo Alejar. Other parents opt to give their kids a first name that’s also their last name. For example, there are people named Salcedo Salcedo or Salvador Salvador.

In the name of his father and mother. Ramgen Revilla’s name is proof of his parents’ not-so-tempestuous union.

Premise: There’s no better way to let the world know that the child belongs to you and your partner by giving him or her a name that’s a combination of the first syllables of your names. For instance, a man named Marcelo and a woman named Helen have a daughter named Helmar. If they have a son, he’ll be named Marhel. 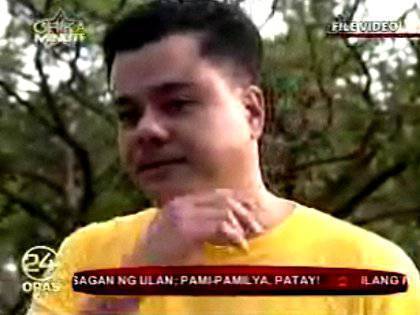 Premise: Take a common name and "personalize" it by coming up with your own spelling. No name is unique enough for you so you have to create your own.

Unique variation: You can also name your kids after things or events. We know people name "Junine" (for June 9, his birthday) and "Mayo Uno" (for May 1, Labor Day).

Sounds like... In Olsen Racela’s case, his first name is meant to be a birthday reminder.

Premise: Make it so your child’s name sounds like something else. Usually, parents come up with pun that pays homage to famous people. Guys with names like Edgar Allan Pe, Fernando Po, or Earvin Magic Tiongson have become popular in online forums.

Match variation: If your family name permits, you can choose a first name that will complement it. Take for example: Sabado Domingo

The Lyns. Jennylyn Mercado is one of the many Pinays whose names bear the "-lyn" suffix.

Premise: Bothered by the fact that the name you picked for your daughter is "too short"? Just add the suffix, "-lyn." Examples: Rovilyn, Winnalyn, Chenelyn, and so on.

Addendum variation: For girls, add the second name "Mae." For boys, add the suffix "-son," as in Ericson, Rickson, Williamson, and Jayson.

The nickname becomes her. Ballsy Aquino-Cruz is certainly that.

Premise: You got all serious with your kid’s legal name, so you decide to have fun with his or her nickname.

Attributed variation: Pinoys often give nicknames that state the obvious, such as "Payat," "Taba," and so on. The name sticks even when the kid outgrows whatever characteristic he or she was known for during his or her early years.