UPDATED: Bayo says sorry for "What's your mix?" ad campaign; Official statement says campaign message got "lost&
Loading
Already a member? Log in
No account yet? Create Account
Spot.ph is your one-stop urban lifestyle guide to the best of Manila.

(UPDATE No. 2 - June 8, 6:00 p.m. Note: Article originally published on June 7, 8:07 p.m.) ABS-CBNNews.com reports that clothing brand Bayo is "set to replace its newly launched ad campaign after it drew flak for directly promoting mixed-race models." The report noted: "Lyn Agustin, Bayo's vice president for product research and development, said they will prepare a ’better and more sensitive campaign’ following the backlash it received over the "What's Your Mix?" ads, which featured models with labels such as "50% Australian and 50% Filipino."

According to the report, Agustin also revealed that the "What's Your Mix?" ads, which are still displayed in Bayo boutiques nationwide, "will be taken down immediately." Bayo will "come up with a new concept for their campaign."

Below is the full official statement that Agustin released to the media:

"We, at Bayo, deeply apologize for the message our campaign-"What's Your Mix?"-has unintentionally conveyed. We would like to express our regrets to those who have been offended or felt discriminated against.

Our company and our partners have always taken pride in being pro-Filipino as we continue to celebrate our uniqueness and achievements. We believe that being a Filipino will always make you 100% beautiful. It is unfortunate that this message got lost along the way.

We thank everyone who has shown support for our thrust of promoting Filipino beauty, talent, and creativity." 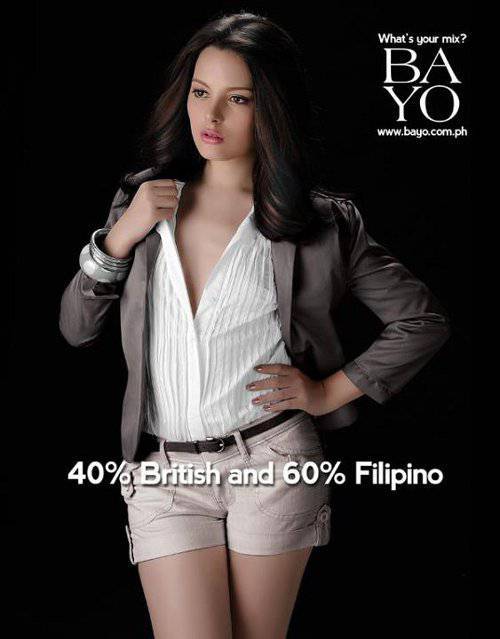 The images on this page are part of the controversial ad series. These images were posted on the Bayo Manila official Facebook page and were easily accessible to the public.

Bayo Ad Campaign Controversy
Your Guide to Thriving in This Strange New World
Staying
In? What to watch, what to eat, and where to shop from home
OR
Heading
Out? What you need to know to stay safe when heading out