VIDEO: Icon bar at InterContinental Hotel Makati allegedly turned away 5 transgenders
Loading
Already a member? Log in
No account yet? Create Account
Spot.ph is your one-stop urban lifestyle guide to the best of Manila.

In a report published on InterAksyon.com, educator, Ladlad chairman emiritus, and broadcast journalist Danton Remoto reports that five Filipino transgenders-Santy Layno, Aiyah Mayer, Jazmine Ramona, Nadine Barcelona, and Amone Reyes-were "barred from entering Icon Bar of InterContinental Hotel Makati at 2:30 a.m. Friday, June 1." According to the report, a woman-who claimed she was the bar’s manager and identified herself only as "Heidi"-refused to let the five transgenders genders get inside the bar. The woman adamantly declared:  "No cross-dressers allowed." One of the transgenders, Aiyah Mayer, recorded a video of the incident and took a photo (see after the end of text) of the bar’s alleged printed "House Rules."

Remoto further revealed that there seems to be some confusion about how the said "House Rules" were interpreted or implemented. According to Remoto’s article: "Icon’s day administration officer Maricon Regino, whose shift had not yet started when the incident occurred, said transgenders are allowed in the bar on a ’case to case basis.’" However, Regino added that "some female guests felt violated when (transgender guests) used the same comfort room."

Remoto went on to write: "The front desk of the InterContinental Hotel noted that Icon is a concessionaire and has a different set of rules from the hotel itself. Repeated calls to the Public Relations Office of the Intercon have so far gone unanswered." Remoto’s report clarified that the transgenders’ issue is only with Icon. One of the transgerders, Santy Layno emphasized that "Intercontinental Hotel itself made them feel welcome." 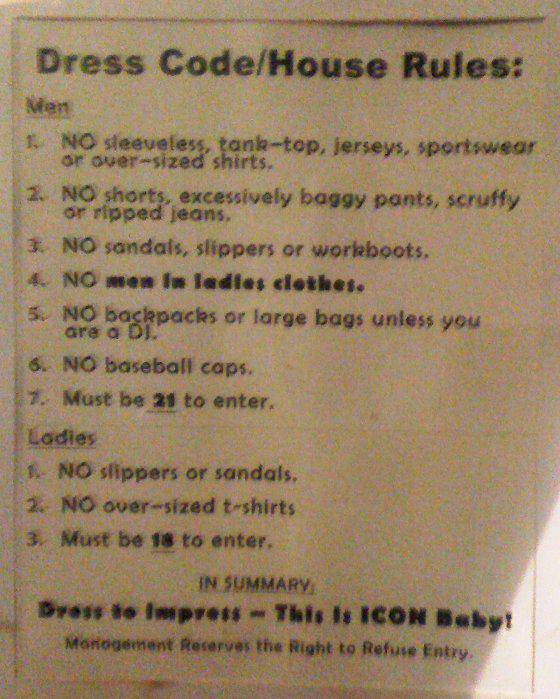 Transgender Lgbtrights
Your Guide to Thriving in This Strange New World
Staying
In? What to watch, what to eat, and where to shop from home
OR
Heading
Out? What you need to know to stay safe when heading out