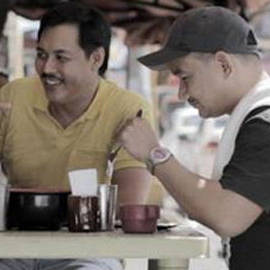 Our SPOT.ph blogger finds that MNL 143 is a lyrical love letter to Manila.

(SPOT.ph) Manila, "distinguished and ever loyal", always looks better in black and white.

I like to think of it in the 1930s, flush with prosperity and progress, living with a sense of grace that seems almost gone today.

Another one of my favorite black and white versions of this city is a shot of the American-era post office building in the early morning. It is found in Manila, the twin-bill homage to the iconic films of Ishmael Bernal and Lino Brocka by Raya Martin and Adolfo Alix Jr. (It was screened on Independence Day at the recently concluded French film festival, where both directors were present.) You know I love Papa P to bits, but the real star of Manila is not Piolo Pascual but the city itself, seen through Albert Banzon’s cinematography, which catches Manila’s rhythm and hazy internal logic in a series of exterior shots: dreamy city scapes this of this treacherous town, working like opiates, numbing the pain and the mind.

These are, after all, painful times.

But perhaps the only way to live in this city is to view it in full color and sound; maybe I need to take it in as it is: dusty, noisy, chaotic, full of potholes and sad hookers and ugly street lamps. I have a friend who believes Manila is a romantic city, which is something I find hard to believe. However when I saw MNL 143, the feature film debut of Emerson Reyes, there was definitely a sense of romantic longing that’s rare to find on the daily commute these days. MNL 143 is a gentle story about love on these mean streets in a post-rock world. Ramil (Allan Paule) is a stoic FX driver hopelessly in love with a woman from his past.

Bravo, Emerson Reyes, for sticking to your original casting choices and getting this film made. Allan Paule-still handsome in a pasty former macho dancer kind of way-is perfectly cast as he sweats in the air conditioned heat and weeps at the thought of Mila, the woman he loves. Joy Viado, usually seen playing evil yaya or quirky tita roles in mainstream movies, makes an unlikely leading lady but provides a character worthy of her own film just on her back story.

Most of the film is about the cramped interaction between passengers in the FX as Ramil drives from Buendia to Fairview, twenty kilometres to comb every day in hopes of finding Mila. Random people get on and off, some of them foul-mouthed matrons or nursing students, pick pockets and office girls.

Funny, sad, and tragic in a very routine and miniscule sort of way, MNL 143 views the city with hope, always filled with the random possibility of finding someone you thought forever lost. I would like to see Manila as the place for that.

As I write this, Emerson Reyes is on his way to the Edinburgh International Film Festival, where MNL 143 is part of the Philippine New Wave showcase. Congratulations, Emerson!

Ria Limjap Cutmesomeslacks Moviereview Indie Cinemalaya Emersonreyes Piolopascual
Your Guide to Thriving in This Strange New World
Staying
In? What to watch, what to eat, and where to shop from home
OR
Heading
Out? What you need to know to stay safe when heading out