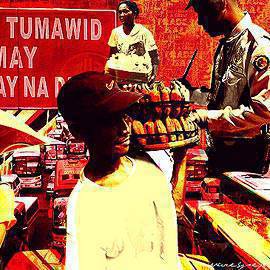 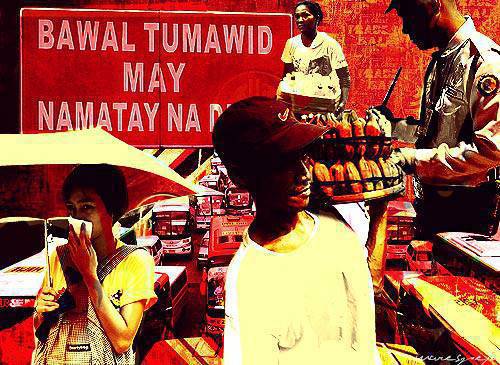 (SPOT.ph) Pockmarked by decay and distress, many say it’s hard to love Manila. But once you do, once its chaos becomes its charm, and its madness becomes its magic, you know it’s true love that you have for the city, baby! People are warm and kind and happy. And while we keep on complaining about the glare of the sun, we know it’s part and parcel of what makes this city so loveable.

Like any other place in the world, there are things about Manila that you're not likely to find in any guidebook. To give newbies an easier time and help locals rediscover the city, here’s a list of things to expect when you find yourself on its crazy streets:

People shouting on the street is normal.
Especially on busy streets where there is what looks to be a jeep or a bus stop or where people are hailing cabs. Do not panic when you hear people suddenly shouting at your ears. "Kasya pa dalawa! Kasya pa dalawa!" Or "Sa ilalim ang daan!" Or "Maluwag pa dito!" That is not Tourette's, mind. And that’s not gibberish, either. They are barkers trying to fill up a jeep or a bus, or hailing a cab for a waiting passenger. Hide your surprise or your fear and walk away. Or better yet, laugh it out-that’s what locals do.

Cab drivers expect tips.
The flag-down rate for cabs is P40. From Ortigas to Makati, you can expect to shell out about P85 pesos, which in Manila, really means two things: P90 if you have a fifty and two twenties on you. Or P100 if you don't. It's pretty much understood that taxi fares are rounded off to the nearest ten or twenty. Drivers call it tipping, passengers call it convenience-it is rather difficult to fish for change, isn't it? Despite this...

... Be ready with some change.
You've just handed the cashier a 500-peso bill to pay for a P110.65 purchase and she makes a face, then asks if you have smaller bills. Or 10 pesos and 65 centavos. Is it because they're too tired to count out your change? Maybe it's something they learn in training: a conspiracy to irritate customers they don't like (in other words, everyone). 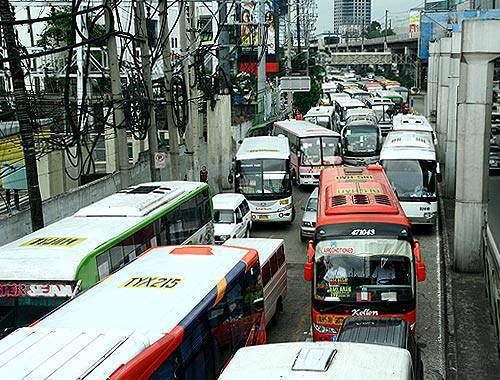 Traffic-heavy traffic-is an everyday occurence.
You will probably experience it less than five minutes after you’ve left the airport. With little care for traffic rules and tiny roads-some say traffic rules really are just traffic suggestions- we sometimes wonder how we manage to get anywhere without being involved in a five-car pileup every single time we’re on the road. Traffic stretches for miles on the highway, cars bumper to bumper with the occasional street vendor and morotcycle in between. Forget using main roads on rush hour, you’re better off getting squeezed into the crevices of the MRT and possibly getting your eyes scratched out. Hence, a strengthened sense of Filipino Time.

People measure distance in terms of time, rather than miles or meters.
Ask how far Makati is from Quezon City, and you'd probably get this answer: "About one hour. Sometimes 45 minutes, sometimes almost two hours." It's not that we aren't familiar with kilometers or miles, we've just learned to measure distance by the time it takes to get where we're going-and it always depends on the traffic. 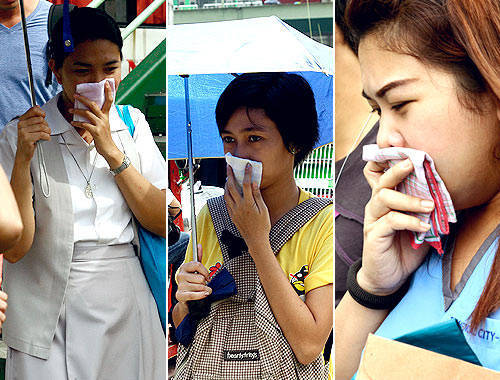 There is a lot of hanky panky.
Yeah, we said it. A square piece of cloth may seem so simple, but to the people of Manila, panyo is a pocket essential. After all, what else can we use to shield our heads from intense sunlight or sudden rain? To sit on when the only available seats seem a bit too grimy? Nothing protects you from the smog and fumes of pollution better than a folded hankerchief smothering your face.

Facial expressions are taken to a different level.
We are able to convey various messages by contorting our faces beyond recognition. How we do that has impressed a lot of foreigner friends, and got them rolling in laughter. How many times have you pointed at something with your mouth? Or answered a question with your eyebrows? How many times have you understood what these are supposed to say? And laugh upon realizing at how advanced our non-verbal communications have become. It’s a new brand of vernacular joining the ranks of coño speak,  jejemon, and bekinese.

Be ready to be called "Ma'amsir."
It doesn't matter if you're alone or if you look as masculine as Arnold Schwarzenegger on a day when he decided to skip shaving-the minute you step foot in a fast food joint, you will be called "ma'amsir," no matter how obvious your gender. But then the opposite of this happens at the train stations. 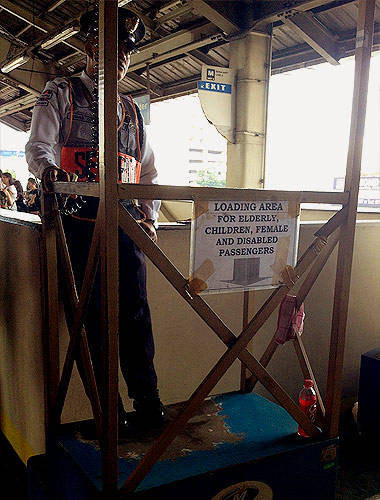 Riding the trains feels like a massive soiree, thanks to segregation according to gender.
Boys on the left, girls on the right. In a gentlemanly attempt at preventing perversion, the MRT gods decided to assign exclusive use of the first few MRT cars to girls and senior citizens-there’s security so don’t even bother trying to sneak in. What they don’t tell you, however, is that the girls’ area is absolutely brutal. A jungle. Without the presence of men to impress here, it’s to hell with being prim and proper. Pushing, shoving, kicking, and pulling for a space inside the tiny car are common. 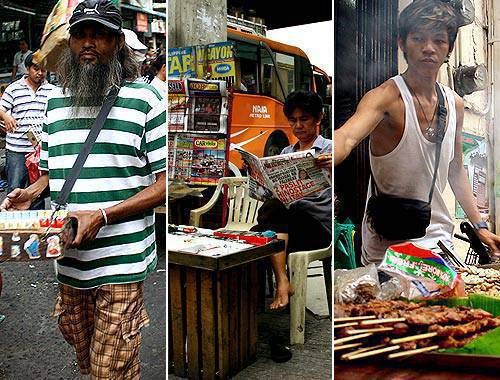 Indulge in on-the-road impulse buying.
Yes, traffic is bad. But then one man's on-the-road hell could easily become another man's (literal) selling point. You know traffic is bad when there are ambulant vendors hawking their wares. They sell everything from the usual items such as food (boiled saba, shrimp crackers, candies, fruits), cigarettes, newspaper, cleaning implements, and bottled water to I-don't-expect-to-see-them-on-the-road objects such as TV antennas, furniture, mobile cellphone chargers, passport holders, bubble guns, and other toys. Maybe retail therapy is the best way to fight road rage.

There will be stalker sales attendants.
Whether it’s to wait for friends who are late for dinner or for rush hour to inch by, malls in Manila are a great way to pass the time. And for some odd reason, the sales attendants seem to find it enjoyable to follow you around while you do your window shopping. Turn to the left, and she’s there. Turn to the right, there she is again! Isn’t that her standing in front of that item you just might want to buy? What does she want from you? Does she think you might shoplift? Will buying something make her go away? Perhaps, you can file this under Personal Shopping Experiences.

There will be laughter.
Filipinos are happy people. We laugh at pretty much anything and everything-even during calamities and troubling times. We laugh when we miss a step on a staircase and almost roll down the rest of the way because of it. We laugh when we get an answer wrong. The laughter is almost always partly embarrassed, partly sheepish, partly apologetic. It's our knee-jerk reaction to most anything. 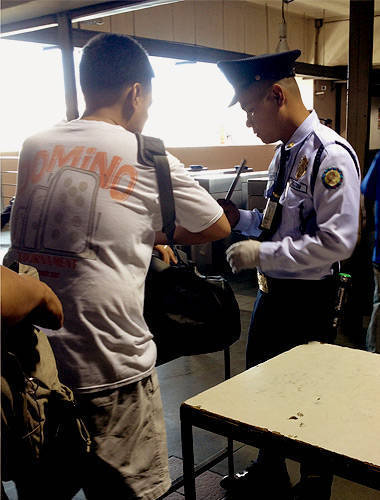 Guards will poke a wand at your belongings at every entrance.
Yes, it’s better to be safe than sorry, but that doesn’t make it any less irritating. Whichever door you decide to go through-whether you’re entering a mall, a train station, or heck, sometimes even a restaurant- expect to go through security. That is, a guard brandishing a wooden stick and the right to poke through your belongings and inspect the deepest recesses of your purse in search of...we don’t really know. A gun? A grenade? A box of condoms? Practically half of this country's security contingent is delegated to the task. We give them two thumbs up for job creation.

You must "rice" for all occasions.
There's a joke going around that if you prick a Pinoy, rice will come out instead of blood. Of course, that's an exaggeration. But we have to admit it's not that far from the truth. In Metro Manila-as well as other parts of the country-chow spots attract patrons with the promise of unlimited rice. Pinoys are such rabid rice fanatics that we can make a feast out of rice and drippings, rice and gravy, rice and margarine, and, yes, even rice drizzled with coffee. Our constant carbo-loading probably explains why we're so happy all the time. 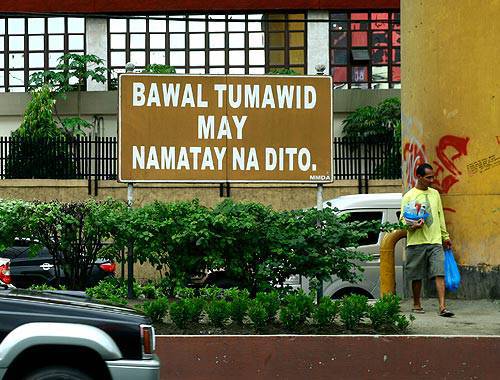 TMI signs are everywhere!
Where else would you see road signs that threaten death, as in "Bawal tumawid. May namatay na dito" or "Walang tawiran. Nakamamatay"? Or refer to bodily functions and excretions "Bawal umihi dito" or "Bawal mag-iwan ng tae dito"? The prevalence of these type of signs may lead one to conclude that a good number of Metro Manila residents have a death wish or consider public places as makeshift bathrooms. That may be the case-but bear in mind that there are also many citizens who are putting up all these signs as part of their never-say-die fight to save lives and clean up the metropolis. Maybe one day everyone will read those signs and actually heed them.

Manila
Your Guide to Thriving in This Strange New World
Staying
In? What to watch, what to eat, and where to shop from home
OR
Heading
Out? What you need to know to stay safe when heading out