A Super Stellar Launch for the I Am For Peace Campaign
Loading
Already a member? Log in
No account yet? Create Account
Spot.ph is your one-stop urban lifestyle guide to the best of Manila. 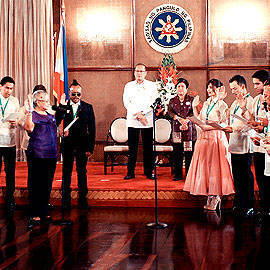 A Super Stellar Launch for the I Am For Peace Campaign

The Palace rolls out the big guns for their peace initiative.

(SPOT.PH) If Malacanang’s choice of National Peace Ambassadors for the I Am For Peace campaign says anything, it’s that the Palace is very social media savvy. Internet star Ramon Bautista, for instance, who has over three hundred thousand Twitter followers, has been brought onboard, alongside Gerald Anderson, Christian Bautista, Megan Young, Karylle, Sam Concepcion, and Anne Curtis, who, by the way, has over three million followers on Twitter! Noel Cabangon, Ebe Dancel, Karylle, Gloc-9, Kiray, Igi Boy, Epy Quizon, Rovilson Fernandez, Moro artist Datu Khomeini Bansuan, fashion designers Arnold Galang and the Fashion Design Council of the Philippines, the Philippine Akzals and international star Apl. De. Ap complete the list. 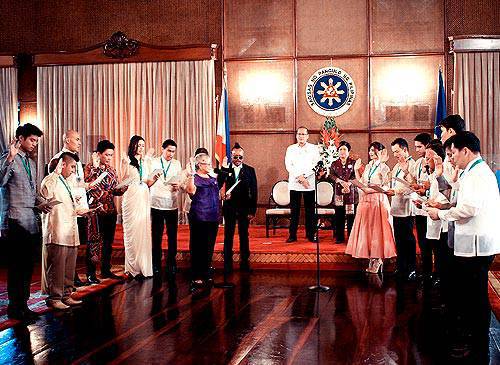 "We are very happy with the feedback and the diversity of this group and their scope," Presidential Adviser on the Peace Process Teresita Quintos Deles tells Spot at the campaign’s launch this morning, September 14, at the Malacanang Palace. "Some volunteered, and then we looked at who would make good models, those who are being followed in social media, and those who are willing to do it."

"Many of them really come from hard work and perseverance. At kung a-a-nuhin mo, tuwid na daan in terms of their career. They're admired. But [we] chose them most especially for their willingness. Because this is just not just about coming here. It's commitment to the campaign," Secretaary Deles says of the Ambassadors.

"I come from Mindanao, I was there during the bombings so being an Ambassador for Peace really means a lot to me," Gerald Anderson says. Apart from their spreading the advocacy-we’re guessing via social media- the ambassadors will also be visiting several provinces of the country to help spread the word.

I Am For Peace Ramonbautista Annecurtis Geraldanderson Samconcpcion Apldeap
Your Guide to Thriving in This Strange New World
Staying
In? What to watch, what to eat, and where to shop from home
OR
Heading
Out? What you need to know to stay safe when heading out