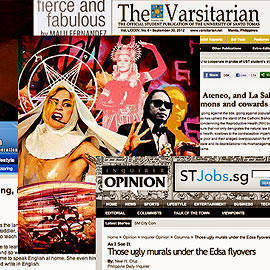 When some people speak their minds, they stir up a hornet’s nest. 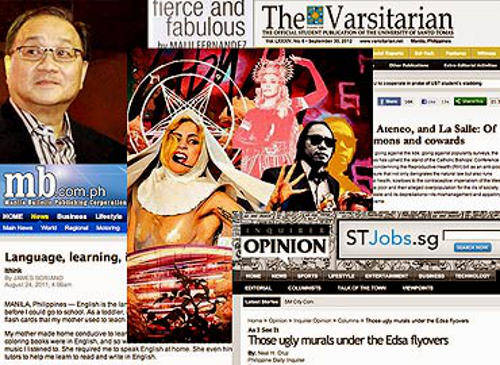 (SPOT.ph) In theory, democracy allows us to weigh in on anything. However, there are some opinions that cause near-riots. Thus, in light of recent developments, we’ve compiled a list of the most controversial editorials and open letters in recent memory. They range from the ridiculous to the enlightening, the petty to the profound, the self-righteous to the satirical. All the same-their authors dared to push the envelope by putting their thoughts out there.

Note: They are arranged in chronological order, from the oldest to the latest. 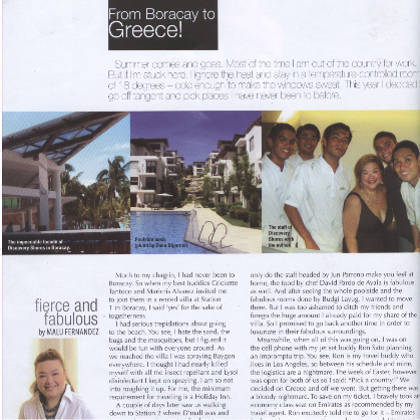 "From Boracay to Greece" by Malu Fernandez

Point of origin: This was an entry in Fernandez's Fierce and Fabulous column in People Asia’s June 2007 issue.

Under fire: The piece featured the author's recollection of being in a flight which seemed to have a lot of OFWs as passengers. Apparently, she didn't like being stuck in close quarters with them.

Killer excerpt: "On my way back, I had to bravely take the economy flight once more. This time I had already resigned myself to being trapped like a sardine in a sardine can with all these OFWs smelling of AXE and Charlie cologne while Jo Malone evaporated into thin air. I heaved a sigh, popped my sleeping pills and dozed off to the sounds of gum chewing and endless yelling of 'Hoy! Kumusta ka na? At taga sa'n ka? Domestic helper ka rin ba?' I thought I had died and God had sent me to my very own private hell."

Bottom line: Fernandez's mistake was that she dared to put in writing the thoughts that she should have just kept to herself. Let's face it-she doesn't have a monopoly on these politically incorrect musings. To be fair though, there are a lot of other rowdy crowds on planes. 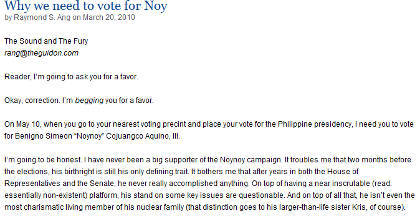 "Why we need to vote for Noy" by Raymond S. Ang

Under fire: The editorial was a passionate argument about voting for then-senator Noynoy Aquino as president because any vote against him would be like a vote for then-presidentiable Senator Manny Villar, whom the editorial had obviously branded as the bad guy.

Killer excerpt: "I'm not asking you to vote for Noynoy because I think he's the best, most qualified candidate. He really isn't, not by a long shot. In my opinion, it's Gilbert Teodoro, with maybe Dick Gordon in second place. I have a lot of friends with a lot of opinions and while we never seem to agree on who the best candidate is, I think we all agree that objectively speaking, it's just not Noynoy Aquino. But the thing is, I'm voting for him anyway. Why am I asking you to vote for Noynoy? I'm asking you to vote for him because of the alternative. At this point, it's safe to say that Gordon, Teodoro, the always ineffable Erap Estrada, campaign spitfire Jamby Madrigal, and any other presidentiables are all essentially saling pusa candidates. 2010 has long revealed itself to be a two-man race, a race that some say pits 'Good' versus 'Evil,' a race between Manny Villar and Noynoy Aquino. Wherever your non-Villar loyalties lie, you need to vote for Noynoy because a vote for Gordon, Teodoro, Madrigal, and even Estrada (if you're inclined to do so), is a vote for Villar."

Bottom line: It is-to say the least-quite an interesting way to convince people to vote for someone. Many people didn't like the fact that the editorial seemed to be inferring that voting for a "sure win" was better than voting for the most qualified candidate.

Point of origin: It was published in the Manila Bulletin's August 24, 2011 issue.

Under fire: The broadsheet columnist talks about using English and Filipino.

Killer excerpt: "Filipino, on the other hand, was always the 'other' subject-almost a special subject-like PE or Home Economics, except that it was graded the same way as Science, Math, Religion, and English. My classmates and I used to complain about Filipino all the time. Filipino was a chore, like washing the dishes; it was not the language of learning. It was the language we used to speak to the people who washed our dishes."

Bottom line: The columnist got accused of being elitist-and it didn't help that August was "Buwan ng Wika." Many people deemed it an intentional case of bad timing.

"It's the economy, student" by Gloria Macapagal-Arroyo

Point of origin: The nine-page essay was disseminated by the camp of Gloria Macapagal-Arroyo sometime in January 2012.

Under fire: It seemed like Arroyo's way of slamming Aquino, who was her former student.

Killer excerpt: "Neither the President nor anyone else can truly expect to govern the next five years with nothing but a sorry mix of vilification, periodically recycled promises of action followed by lethargy, backed up by few if any results, and presumptuously encouraging gossip about one's love life in which no one can possibly be interested. Given the electoral mandate that he enjoyed in 2010- the same size as mine in 2004, as predicted by every survey organization at that time-our people deserve more, and better, from him."

Bottom line: It's the reaction of a predecessor who feels that her successor is using her as a scapegoat for (as she puts it) his alleged shortcomings.

Point of origin: This was published in De Veyra's SPOT.ph blog, This is A Crazy Planets on May 28, 2012.

Under fire: This blog post should have come with this tag: "By the way, this is satire." A lot of people didn't quite get that De Veyra was actually mocking the people who had branded Lady Gaga a Satanist.

Bottom line: It's that awkward moment when one person's level of sarcasm is so advanced that some people think he has actually gone over to the anti-Gaga side.

"Those ugly murals under the EDSA flyovers" by Neal Cruz

Point of origin: This was published as the Philippine Daily Inquirer columnist's entry for the June 12, 2012 issue. The column is called As I See It.

Under fire: Cruz made it known that he thought the attempts at Metro Manila street art were all ugly, singling out a paint company's avant garde take on plumbing pipes.

Killer excerpt: "Metro Manila, with certain exceptions, is ugly enough as it is, why make it uglier with those monstrous murals? The one at Cubao shows nothing but the ugly undersides of buildings and flyovers with plumbing and pipes very prominent among them. What for? You know what those plumbing fixtures do in real life? They carry the -, you know what, from all the residences and buildings all around. The undersides of flyovers are ugly enough with them so dark. What they need is light, not ugly murals."

Bottom line: They say that beauty is in the eye of the beholder. Unfortunately, it seemed that this particular beholder would rather have gouged out his eyes.

An open letter to Sen. Juan Ponce Enrile: On love and lust and leaps of logic" by Dr. Margie Holmes

Point of origin: This was posted on Interaksyon.com on August 6, 2012. At the time, the Reproductive Health (RH) Bill debates were heating up.

Killer excerpt: "I take it personally because you said you wanted me to be happy. Gusto niyo po happy ako? With all due respect, Senator Enrile, hindi ako happy pag nakikita ko na maraming gustong maghanapbuhay walang mapasukan at pag nababasa ko ang paghihirap ng mga OFW na sumusulat sa akin (You want me to be happy? With all due respect, Senator Enrile, I am not happy when I see that many people want to work but there are no vacancies and when I read about the trials of the OFWs who write to me). It would be simplistic of me to blame all this on not having passed the RH Bill earlier, but giving people the right to choose how, and indeed if, they want to space and/or limit their families will surely help alleviate these conditions. I take it personally because, in the end, the political is personal and the personal political."

Bottom line: Naturally, Holmes was lauded by pro-RH Bill supporters for having the balls to address a man who is considered by many as the proverbial "sharpest tool in the shed" at the Senate.

Point of origin: This was Ramon Tulfo's article for his Philippine Daily Inquirer column, On Target. It was published on August 15, 2012.

Under fire: The title may be referring to Department of Public Works and Highways Secretary Rogelio Singson-but the first two segments of the column are about the valiant efforts of Senator Tito Sotto versus the Reproductive Health Bill.

Killer excerpt: "Speaking of Sotto being Catholic, he and this columnist were classmates in Grade VII at the Colegio de San Juan de Letran, an all-boys, Catholic-run school. Sotto was the youngest among his classmates to finish elementary school because he was accelerated twice for his high grades. People who think Sotto is of average intelligence have another think coming."

Bottom line: This column entry may not have gone viral-but maybe it will now. It came out before Sotto's plagiarism was discovered so we can almost forgive the columnist's staunch defense of the comedian-turned-lawmaker. You could say it's downright shocking that Sotto was considered very smart at some point in his life. Then again, a lot of things can happen between grade school and middle age.

"OPM is dead, so sue me" by Leloy Claudio

Point of origin: This was published on GMA News Online on August 28, 2012.

Under fire: Claudio pronounced the death of Pinoy music. Naturally, many people objected.

Killer excerpt: "I fear the instinctive defensiveness of many old hands about the death of OPM belies a lack of willingness to have a discussion about structural issues that impinge on the arts. Of course people will always make music, but that isn't a sign of life. Until the government and the media industries decide that local audiences deserve better, OPM will stay dead. And if I'm being whiny, sue me."

Bottom line: If OPM no longer does it for him, then so be it. He's entitled to make a sweeping generalization about the Pinoy music scene. Those who don't agree with him can always tune out.

"Thoughts on dating a carless guy" by Jeanette Ipapo-Tuason

Point of origin: This was published in the Business section of the Philippine Daily Inquirer on September 12, 2012.