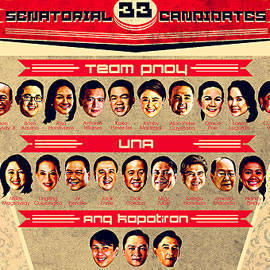 Election 2013 By The Numbers

Senatorial candidates for the 2013 Elections broken down into numbers

(SPOT.ph) Cramming for the elections? We hope not. Live debates have been held and candidate cards are available all over the web so by now, you should have read up on the candidates battling it out for your vote.

What we’ll do now is give you a quick guide in numbers. For starters, you should know the basics. You get to vote for 12 Senators, 1 Party List, 1 Representative, 1 Mayor, 1 Vice Mayor; check your ballot for the number of Sangguniang Panglungsod (Councilors) you’re supposed to pick. You should also search for the party list you want to vote for in the Comelec’s database to see if they haven’t been disqualified.

SPOT.ph focuses on the 33 senatorial candidates, all of whom have made their stand on various issues including the Reproductive Health Law, Freedom of Information Bill, and even same sex marriage. We broke them down further into numbers and you might be interested to know these lesser-known statistics.

We’re sure you’ll be glad to know that all 33 of them have undergraduate degrees*:

Our little floaty heads are broken down into political tickets. Some are in political parties but are not in tickets, like Brother Eddie Villanueva who is under Bangon Pilipinas, but is running "independently." Others are are not part of political parties, like Chiz Escudero, who does not belong to a political party but is under the Team PNoy ticket.

Click on the infographic below to find out more:

To help you look them up on the ballots, here are some more numbers:

And lastly, among the senatorial candidates, we found that some famous last names** show multiple results in Comelec’s List of Candidates:

You can check for other common "political" surnames and see what numbers you get.

**SPOT.ph did not pinpoint the exact relation of the people sharing these surnames