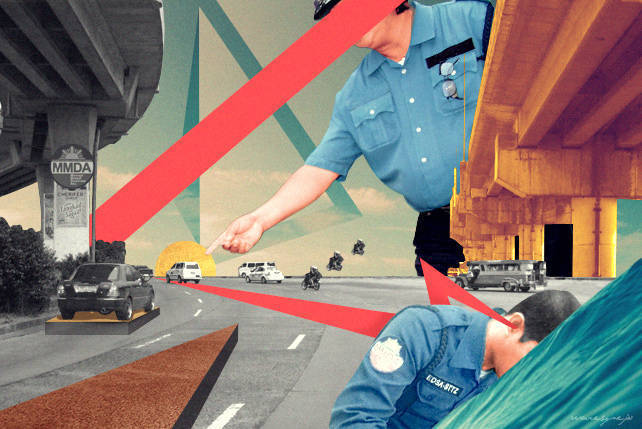 Smackdown: MMDA vs The Road

They fight the good fight every day...but are they winning? 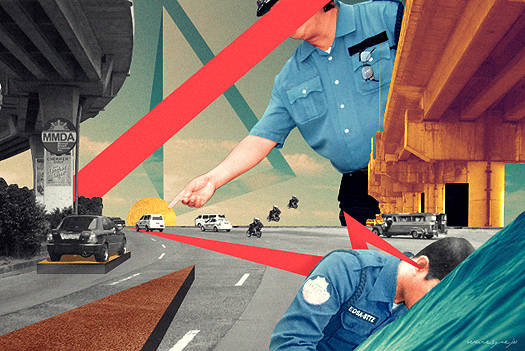 (SPOT.ph) Epic traffic, flooding, accidents...how do you solve a problem like Manila? The Metro Manila Development Authority has their work cut out for them and they’re just not getting any slack. We’ve featured them once or twice generating Urban Buzz but with the rainy season making the traffic worse, they’re bound to get a lot of flak. Sometimes for things that aren’t even their fault.

That being said, let’s have a quick recap of the things that they’ve done for this great city of ours! It’s MMDA vs The Road!

The problem: Too many people on the road.

The solution: Someone from the MMDA noticed that during rush hour, one side of EDSA is a little more congested than the other. The proposal was to schedule "reversible lanes" within the day.

Aftermath: Grab some popcorn and let’s all see how well this one works. To be safe, here are 16 things you can do while stuck in traffic because this one seems sketchy.

2. MMDA vs The Darkness

The problem: With the power of the Internet, Ronnel Cuison asked both MMDA and DPWH, "Bakit ang dilim sa EDSA?"

The solution: The two agencies claimed that neither of them have the authority or responsibility to, in a manner of speaking, shed light on the matter.

Aftermath: They handed us a nice warm cup of nothing...so, uh, no? However, they did install solar-powered lights in some overpasses so that counts for something but there’s still a lot of darkness in footbridges all over the Metro.

3. MMDA vs The Train

The problem: Too many people trying to board the train.

The solution: The MRT management hatched a plan to use a bus to ferry people to and from the farthest stations (North Avenue to Ayala, Magallanes, and Taft).

Aftermath: Due to a "glitch," MMDA enforcers intercepted the MRT bus when the driver tried to use the underpass, since public utility vehicles aren’t allowed to pass through. The bus-link had encountered several other problems in its test run, displaying a lack of coordination between government agencies, and they decided to cancel the experiment after several hours.

The problem: Buses that stop anywhere they like to pick up passengers and taking the "stop" in "bus stop" way too seriously.

The solution: Assign specific stops for buses...which is how things really should be.

Aftermath: It works...when someone’s looking. We can’t pin the blame on MMDA if the drivers are resiliently disobedient but maybe they need to think of creative ways to punish people. Like force them to operate buses with square wheels.

The problem: Dan Brown called Manila the Gates of Hell.

6. MMDA vs Beating the Red Light: The Portable Rotunda

The problem: Drivers who speed up to beat a red light in an intersection, causing crashes.

The solution: A rotunda, for slow but free-flowing traffic.

Aftermath: It’s not such a bad idea but it needs more cooking as it caused traffic jams, with at least one driver plowing through a poorly placed rotunda near the airport.

The problem: Commonwealth’s increasing infamy as the deadliest stretch of road in Metro Manila.

The solution: Slow things down by imposing a 60 kph limit from Philcoa up to the Sandiganbayan area in 2011 and extending it to Fairview in February 2013.

Aftermath: They’ve installed CCTV cameras to monitor the vehicles but accidents due to reckless driving still occur. It seems like the 60 kph limit is in effect only if it’s being enforced by actual humans present on the ground. Again, it’s not MMDA’s fault if people don’t want to follow the rules.

The problem: People who are (blissfully) unaware of what road signs mean and doing the highly notorious offense of jaywalking.

The solution: Get ’em while they’re young! Build a park to lure children into being good citizen. (Insert evil laughter here.)

Aftermath: The effects of the Road Safety Park cannot be determined at the moment.

The problem: Motorcycles. Motorcycles everywhere. In an attempt to avoid getting stuck in traffic jams, some people have taken to a two-wheeled mode of transportation that not only irked people in cars but has also led to fatal accidents.

The solution: Limit the swerving and the pag-singit by designating a bike lane in major roads like Commonwealth and EDSA.

Aftermath: It’s a bit easier to avoid them now. Some are still not following the lane (we see you) but it is a marked improvement.

10. MMDA vs The Rain: Satellite Office

The problem: Alarmingly quick flooding from little rainfall in parts of Metro Manila.

The solution: In a step towards empathy, Chief Francis Tolentino set up office along Espana to give him "a firsthand view" of the problem. The MMDA pointed to vandals deliberately clogging the drains and professed vigilance in monitoring the streets for said individuals.

Aftermath: We can imagine a short film (or a full-length) of a standoff between MMDA and "the little people of Manila" who just want a few coins from motorists drenched in rain. We hope those with pure hearts win.