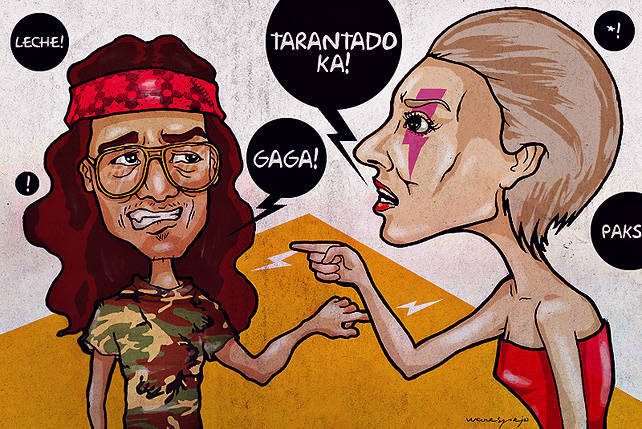 (SPOT.ph) In celebration of the National Language Month, we are giving praise to popular profanities that can perk up your vocabulary. We don’t want to encourage being rude but according to TIME, those with a secure position in society (i.e. the upper class) swear more. We want to appear more, er, classy.

They say that the best way to get started on learning a language is through swearing. Whoever made this claim is a f*cking genius. After all, the hallmark of proficiency in a language is being able to express yourself through it and nothing is more expressive than a cuss word.

Profanity index: It’s the more insulting version of baliw and is the best argument plug ever invented by the Filipino mind. Any fight can be ended with this single word. Wait for the moment when your "opponent" has just delivered a passionate spiel and then with a straightface say, "ulul." Watch how flustered and baffled they get.

Clean translation: (You are) smegma

Additional information: Smegma is "the cheesy sebaceous matter that collects between the glans penis and the foreskin or around the clitoris and labia minora"

Profanity index: Kupal can be thought of as the next level epal, that is, someone who has become quite unbearable as an attention-seeking whore who "power trips." Not entirely offensive and is actually pretty fun to say. Try it.

Clean translation: (You are) lightning!

Profanity index: Generally mild, unless said in a very vehement way. But then again, you usually say it when you’re in a rage to describe the object of your, um, passion.

Clean translation: (You are) turning me into the male reproductive organ.

Profanity index: Often said to express annoyance, as in "hanggang kailan maghihintay, ako ay nabuburat na" from Pare Ko by the Eraserheads. Although it has a sexual connotation, saying this won’t make anyone blush but people might scoff at you for being uncouth.

Clean translation: (You are your mother’s) uterine prolapse.

Additional information: "Prolapse happens when the ligaments supporting the uterus become so weak that the uterus cannot stay in place and slips down from its normal position"

Profanity index: Despite being an extremely uncomfortable medical condition, this is considered a rather mild profanity that expresses irritation. Presumably this is because a prolapsed uterus is, to put it lightly, irritating.

Profanity index: If you feel like calling someone a nitwit, dolt, or idiot is harsh, put gago and gaga on that level. You’ll hear this used as a strange term of endearment when people have reached an intense amount of intimacy but for the most part, it can be a verb that best describes situations that make you feel like a fool, e.g. Nakakagago yata ang list na ito.

Clean translation: (You are) dazed

Profanity index: A harsher version of gago, but with no female equivalent i.e. there is no tarantada.

Additional explanation: Puño means wrist stroke in Spanish, which can account for the, uh, male masturbatory meaning of the word punyeta. Puñal also means fist or fitting into one’s hand and dagger, which accounts for the female masturbatory and penetrative implication of the word.

Profanity index: Ranks up there with put*ang in*. Typically used as an adjective to describe a miserable situation or a person who causes you misery, e.g. "Punyet*ng buhay ito, bakit ba kasi nakilala ko pa yang punyet*ng babaeng yan."

Profanity index: The marriage of two of the most popular English profanities, pakshet was popularized in the movie Jologs. It’s less harsh than f*ck and sh*t because, as in mathematics, two negatives make a positive.

Profanity index: Incredibly popular and highly versatile, as it can be used in extreme anger and extreme joy. Often shortened to "t*ngin*" and can be watered down to "taena."

Additional explanation: Leche is milk in Spanish and milk looks like ejaculate.

Profanity index: Expresses the same sentiment as punyet* but is a teensy bit milder since there’s no strong correlation between milk and sperm in the Philippines.

Profanity index: Now we get religious. There’s nothing wrong with this until you realize that you must not take the Lord’s name in vain. Maybe you can just say the "sep" part, since Joseph is a modest non-biological father.

BONUS ROUND: Here are some other profanities that you may want to add to your existing arsenal.

Profanity National Language Month Language
Your Guide to Thriving in This Strange New World
Staying
In? What to watch, what to eat, and where to shop from home
OR
Heading
Out? What you need to know to stay safe when heading out