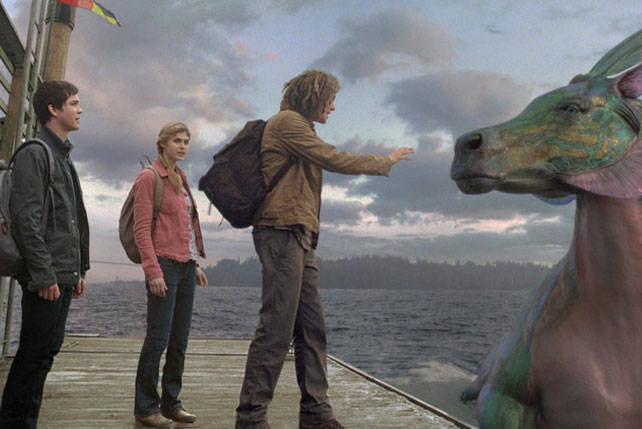 SPOT.ph blogger Paul Daza on a movie about sea monsters that, oddly enough, didn’t have enough of them.

(SPOT.ph) In this sequel to 2010's Percy Jackson: The Lightning Thief, teen demigods Percy (Logan Lerman), Annabeth (Alexandra Daddario), Grover (Brandon Jackson) and Clarisse (Levin Rambin) are thrust into a nightmarish odyssey to protect their haven, Camp Half-Blood, when it's attacked by a powerful enemy. Their quest to save their world takes them to the treacherous Sea of Monsters, where they must find the fabled Golden Fleece and defeat the terrifying creatures which guard it. Based on the bestselling young adult book, Percy Jackson: Sea of Monsters by Rick Riordan. 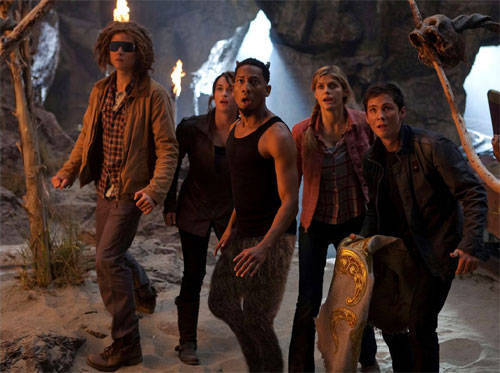 The credits sequences and prologue. You'd think that a movie called Sea of Monsters would have lots of sea monsters, right? Wrong. This Percy Jackson fantasy adventure only has two of them: a beautiful water horse called Hippocampus and the man-eating, whale-sized behemoth Charybdis. Perhaps sensing that their movie's title promised more monsters than the movie itself could deliver, the filmmakers devised the opening and closing credits as an underwater trek through moonlit seas. The most dazzling creature to behold here is a luminous jellyfish that looks like it strayed over from Life of Pi. Immediately following the opening credits, the action moves to dry land, where more marvelous imagery awaits. In a prologue that shows us where Camp Half-Blood's protective barrier originated from, we're shown the beautiful but disturbing image of a dying young lady being transformed into a tough and thick tree.

Stanley Tucci as Dionysus, the god of wine. Unlike the first Percy Jackson movie, there are no Hollywood A-listers like Pierce Brosnan or Uma Thurman in the sequel. Compensating for the film's diminished star power is Stanley Tucci in fine comic relief form as the guy who runs Camp Half-Blood. Indeed, the laughs he triggers from forgetting the names of his campers or expressing his admiration for the Christian God who turns water into wine are as preciously entertaining as the film's far more expensive, CG spectacles.

The Kronos flashback and the Hippocampus. In a movie season that's saturated with computer-generated wizardry, it's no small feat to engineer a fanciful creature or mount a surreal, standout sequence that will stay with viewers long after the movie is over. Sea of Monsters has not one but two such stunningly beautiful creations. The first is the exquisitely visualized story about why Kronos was killed by his sons, presented using characters and environments "made" from magnificent, stained glass. The film's other beguiling creation is a hippocampus, the rainbow-hued water horse that takes Percy and his friends to the Sea of Monsters.

Logan Lerman's uncomplicated portrayal of Percy. The script for Sea of Monsters requires the teenaged Percy to fret about not meeting the expectations of his fellow demigods, and to feel abandoned and ignored by his absent father, Poseidon. At one point, he even has to deal with a half-brother he never knew he had. These are the sorts of insecurities and motivations that talented actors mine for angsty, multilayered, and multidimensional portrayals. And yet, despite all the stimuli that the script offers, Lerman turns in a rather colorless portrayal that conveys only one emotion at a time, a far cry from the sympathetic and complex lost boy he played in The Perks of Being A Wallflower.

The easy solutions to problems and the absence of life-threatening danger. After Camp Half-Blood is attacked by a giant metallic bull, Percy and his friends must figure out how to save their world. And where do they find the answer? Why, in Annabeth's iPad, of course! And oh my demigod (OMD), Percy and his friends are in a taxicab that's  driven by three blind witches! Won't that be as thrilling as a theme park ride? Not really, because the witches' blindness isn't fully exploited by the sequence, which doesn't play any different from one where a reckless driver is at the wheel. And oh no! Percy and his friends have been caught by the bad guys and put in a cage! How are they going to get out of that pickle? Well, it shouldn't be much of a problem considering that Percy and company are demigods, and the bad guys are brilliant enough to cage him on a boat in the middle of the ocean, knowing full well that he's the son of Poseidon! The chief flaw of Percy Jackson: Sea of Monsters is that none of the good guys are ever given riddles to solve or obstacles to overcome whose solutions don't present themselves within a minute or two. And setpieces such as the aforementioned cab ride and the other spectacular clashes between good and evil are drained of excitement by uninspired direction and deus ex machina resolutions. 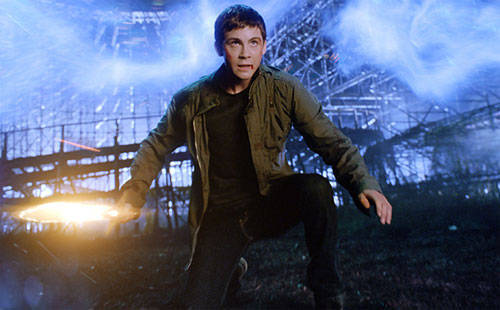 The commonplace Golden Fleece. I remember how excited I was to see what the Ark of the Covenant looked like in Raiders of the Lost Ark, and to see what was inside it. I was similarly excited to see how the Golden Fleece would be realized in Sea of Monsters. But where the lost Ark in Raiders exceeded my expectations, the object of Percy's quest was a letdown of demigod proportions, a fabled object that looked like nothing more than a bathroom rug you could get in Divisoria.

The ideas "borrowed" from the Harry Potterverse. Too numerous to mention, the concepts, situations, and conflicts which Sea of Monsters' filmmakers have cribbed from the Harry Potter books and movies betray an embarrassing lack of originality. Even the best sequence in the film, the stained glass flashback, was surely inspired by the "The Tale of the Three Brothers" scene from Harry Potter and the Deathly Hallows Part 1. And it's not just ideas and objects from JK Rowling's magical universe that are cut and pasted into this patchwork. Even the Ark of the Covenant from Indiana Jones' first adventure is recycled here as the repository of Kronos' remains.

IN BRIEF: Though its fantasy elements and otherworldly creatures are entertaining enough, Percy Jackson: Sea of Monsters will test the patience of those who want more than a formulaic story and computer-generated spectacle.

Movie Review Percyjackson Loganlerman
Your Guide to Thriving in This Strange New World
Staying
In? What to watch, what to eat, and where to shop from home
OR
Heading
Out? What you need to know to stay safe when heading out