Photo plagiarism: UP student admits to "submitting as his own" an award-winning photo taken by Brazil-based social worker
Loading
Already a member? Log in
No account yet? Create Account
Spot.ph is your one-stop urban lifestyle guide to the best of Manila.

Photo plagiarism: UP student admits to "submitting as his own" an award-winning photo taken by Brazil-based social worker

He said he was blinded by the the prize money....but this isn’t the only time that he’s done it. 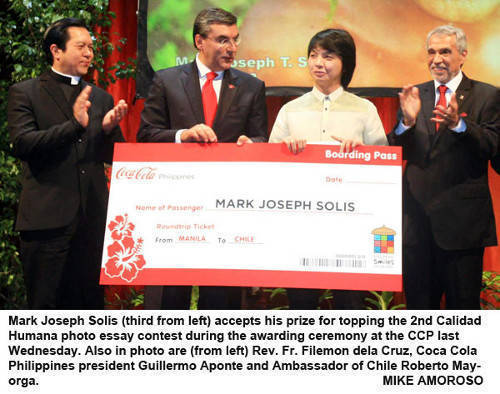 The Philippine Star reports that amateur photographer Mark Joseph Solis has apologized and withdrawn his participation in a photo contest "after it was found that the entry that won him the top prize belonged to a Brazil-based social worker."

According to the report, Solis submitted an entry in the 2nd Calidad Humana National Essay Photography Competition organized by the embassy of Chile "supposedly depicting a boy from Zamboanga City helping his father gather seaweed." The photo bagged the first prize in the contest and Solis, a student at the University of the Philippines, won $1,000 plus round-trip air fare and accommodations to Chile and Brazil.

After Solis' victory was publicized, "Gregory John Smith, a social entrepreneur with the global network Ashoka and founder of the Children at Risk Foundation in Brazil, said it was his photo." A look at his Flickr account revealed that the photo, titled "Neptune of the Sea," was taken in 2006 in Rio de Janeiro.

Solis has apologized for lifting Smith's photo and said he will be talking to the Brazil-based social worker personally. In a letter to "Sir Gregory" posted online, Solis said that "the sheer amount of the prize, the stiff competition, and the unique opportunity to be abroad blinded me from undertaking what is supposed to be an honest and a rightful conduct." 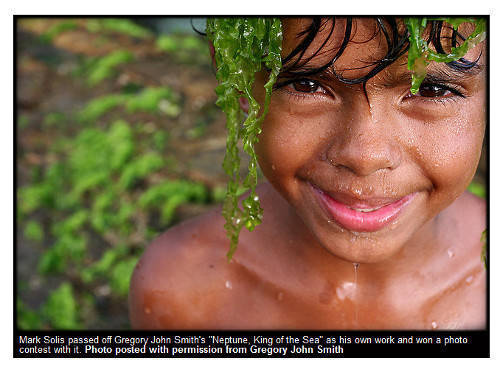 Screenshot of the "stolen photo" as posted on GMA News Online, which the published with permission from Gregory John Smith

For more on this story, log on to Philstar.com and Rappler.com.

Plagiarism Contest
Your Guide to Thriving in This Strange New World
Staying
In? What to watch, what to eat, and where to shop from home
OR
Heading
Out? What you need to know to stay safe when heading out