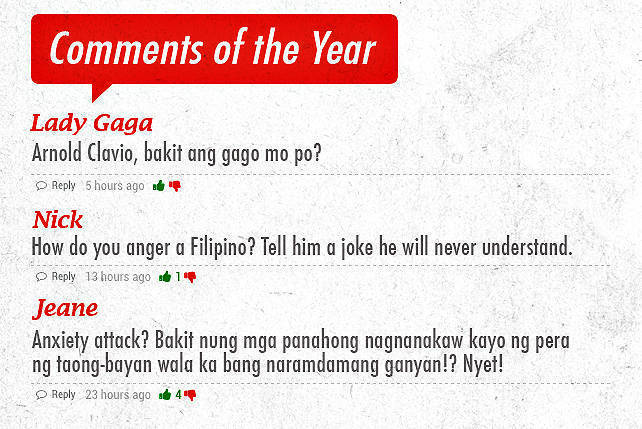 Why yes, we do read them. 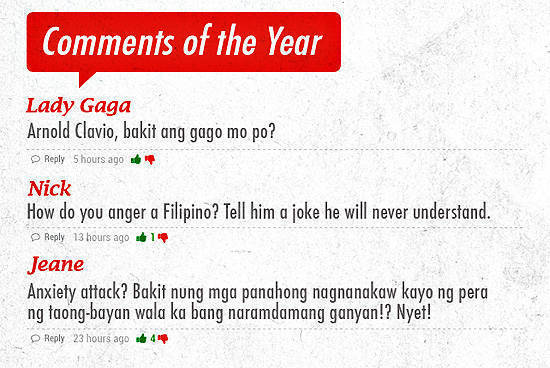 (SPOT.ph) If we had to pick one word to describe the things we find in the comments section of SPOT.ph, it would be "diverse." There’s a lot of passion in there, which is sometimes so misplaced that it boggles the mind, but we love every single letter that you type in the box. We appreciate the fact that you took the time to leave a message-any kind of message-because life is short and you spent a few minutes with us. We’re grateful.

And so, we’ve rounded up our top 50 favorite comments of the year-statements that challenged us, made us think, or had us falling off our seats in laughter. Direct quotes from real readers, straight from their hearts!

Lia on 9-year-old girl in Dasmariñas, Cavite dies after being abducted and raped for 12 days by 4 males.

48.  "Let’s all take a step towards a better future for our country!"

Vincent Yu on Teach for the Philippines

silas27 on SPOT.ph's Fantasy Senatorial Line-Up: 12 People Who Should Be Senators

303202_llepiten on Sunshine Cruz confronts actress Krista Miller online, calls her out for bragging about gifts she got from Cesar Montano

44. "It’s a crime, people. It’s in our laws. Ignorance of the law excuses no one. Regardless of what his reason was for the said act, he violated Art 133. If he did the act in a place not dedicated to religious worship, say Roxas Blvd, then he won’t be liable for Art 133 because the element of place is absent. Freedom of speech is NOT absolute. The law may be harsh, but it is the law."

Melody on Hot on Spot: Social Media Etiquette for Mistresses

41. "I would love a gay son or a heterosexual son or whatever he may prefer (as long as he isn’t a rapist and all his sexual relations are consensual). But I would probably be very ashamed of a son who is a bigot."

Helen of Tondo on Christine Bersola-Babao's "Being Gay" article earns her flak; Critics accuse her of bigotry

40. "I dont care if it is just a temporary hold. It is a GROTESQUE TRAMPLING of the separation of powers and the right of the executive to produce legislation. The Supreme Court should never under ANY CIRCUMSTANCES block laws unless they are in clear and direct violation of the Constitution. After years of debate and endless rewrites it’s pretty obvious that isn’t the case with the RH Bill. Instead the ’great and the good’ on the bench have gone along with vague petitions that are nothing more than emotive religious drivel droning on about the sanctity of life and the threat the bill poses to the Filipino family. Pleaseee!!! Presumably these bold upholders of the law were cowed into craven submission by threats from the Catholic Taleban (oops Church) or they want ’revenge’ for past perceived executive meddling in the judicial domain. Pathetic, sad excuses for ’justices’"

mother on Kris Aquino resigns from all her shows, says she's turning her back on showbiz for son Bimby's sake.

36."For starters, he can confront Willie Revillame on national TV-and proceed to melt him like a wax candle in front of his legion of fans watching him live and on air."

jesuswasablackman on What Would Jesus Do in Metro Manila?

35. "Sheesh... most commenters here are fanatics. TSK. If any of you studied film or even get to learn about film appreciation, you’ll understand and agree what the writer has to say. Very commercialized. So mainstream. In the end, it’s "pera-pera lang yan.""

33. "I saw some at Rustan’s before. And a lady bought a pushcart of that!"

blapp on The Search for Speculoos

32. "I hate how people who visit BLOCK THE ROADS AND CAUSE TRAFFIC WITH THEIR CARS. (Yes, I’m especially looking at you, people who have their drivers wait outside Cafe Juanita / Haru and BLOCK THE ROAD."

28.  "If she wants to look like PSY’s doppelganger, then it’s her right to do so. Who are you to say what is and what’s not appealing? She has gone through the cute girl phase and is apparently done with it. If she wants reinvention, then let her be."

happypill on Mission for the People: Save Charice Pempengco

27. "Yes. All we have is our futile laughter. Or else masisiraan na tayo ng bait."

Sad Sam on Hot on Spot: A Love Letter to Nancy Binay

25. "Sometimes I wonder why God didn’t do something like that in the Garden of Eden. Why didn’t He make the tree of the Knowledge of good and evil bear ugly fruit? Why didn’t He surround it with a chain-link fence with barbed wire at the top?"

Username on 15 Words We No Longer Use

Hodor on Fake It Like You Know Game of Thrones: The SPOT.ph Guide to the Bloody Series (So Far)

21. "I should not tell my secret on where to find the most of these vintage, branded pieces...secret."

20. "As a member of the LGTB (sic) community, I find this publicity stunt insulting. I do not see how this scheme can help the cause of the gay rights movement. I believe this young woman is just using the gay rights issue to promote herself, create controversy, and be the center of everyone’s attention. Pathetic."

18. "HOW LONG IT WILL TAKE TATTOO SIZE FROM THE SHOULDER TO THE ELBOW?TNX"

17. "How do you anger a Filipino? Tell him a joke he will never understand."

14. "The wisdom of old has taught us that money, fame and the glory of this world will never fill us. When we put our hearts unto earthy things, we are bound to discover, sooner or later, that they can never satisfy us completely."

13. "Waste of taxpayer’s time and money. Propose to your girl after the taxpayer’s business and outside public property and official business hours. Ok lang pag private company, its is not on the public dime. Naman!"

BrianUB on Cute or crazy? Congressman proposes to his girlfriend in the middle of budget hearing

protocol727 on Janet Napoles surrenders to P-Noy, says she feared for her life

8. "If Marcos could only talk now. Sabagay he’ll meet him very soon somewhere in the after life (heaven or hell?)"

bibbo on Sen. Juan Ponce Enrile responds to former chief-of-staff Gigi Reyes saying she felt "betrayed" by him: "I'm not up to betray any of my people. I've never been known for that"

7. "Sometimes I wonder if the people’s revolution actualy happened. [T]he people that we elect to political positions continue to screw us in any posible way."

5. "This is stupid, our libel laws are already so vague and all encompassing that they should not exist at all in their current form, and now they want to make it even worse. Libel should NOT be a criminal offense at all, let alone making the minimum jail sentence even longer"

4. "She really is having a mental meltdown. Not so surprising from someone who started really young in showbusiness. Karamihan sa mga artista, saan mang parte ng mundo, hindi naaalagaan ang mental health. The difference is, dito sa Pilipinas napakalakas ng stigma sa mga may mental issues. As much as this article is entertaining, it would have been better if you actually analyze her situation."

ILOVEPHILIPPINES on Hot on Spot: Who the hell is Janet Lim Napoles?

Jeana on Aside from diabetes, Janet Napoles claims she also suffers from claustrophobia and anxiety attacks

karen on An Ode to Joy: The Happier Happy Meals