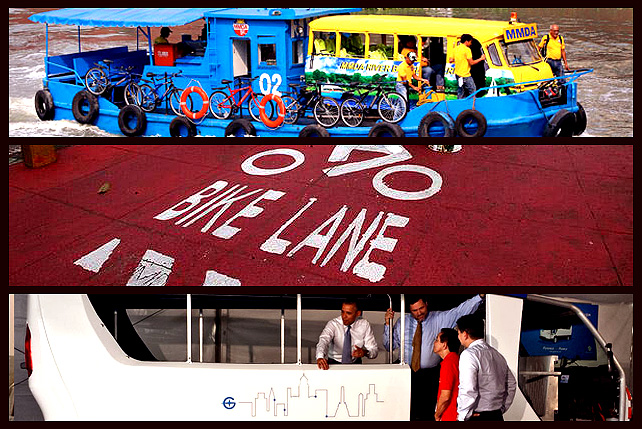 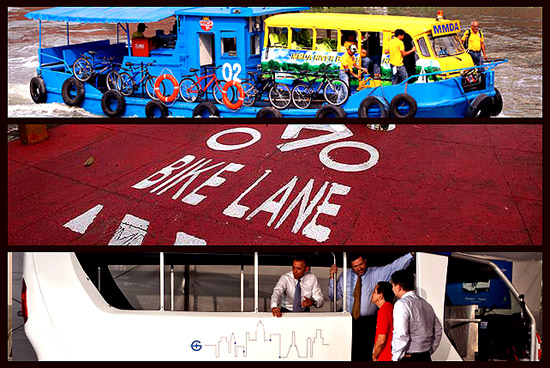 (SPOT.ph) Apparently, catapults and canons are not a good way to travel along EDSA. The suggestion that the public should look for other modes of transportation had regular commuters feeling confused and/or disgruntled. You either take the bus or the train, right?

Perhaps not. It seems that some people in the right places are actually trying to do something about the traffic situation in Metro Manila. The first half of this year was witness to various projects rolled out by different government agencies to help decongest the roads. Here's a quick rundown of proposed projects, test runs, and new ways to get around the city.

In brief: Early this year, the Metro Manila Development Authority (MMDA) extended the bike lanes along EDSA to encourage people to be a little more athletic in their choice of commute. Aside from the bike-sharing between Magallanes and Makati, a stretch of the sidewalk from Ortigas to Santolan (northbound side) and White Planes to EDSA were painted red and opened to two-wheel drives.

Yay: The addition of safer zones for bikers is always good, but...

Nay: Have you been outside in this heat lately? It's not conducive for biking (or anything else, to be honest) but aside from that, the patch of land is a little too short. Hardcore bikers don't mind braving harsh weather, but unless the entire length of EDSA becomes bike-friendly, it's just not going to be a viable alternative for commuters. The same goes for the short stretch of bike lane in Commonwealth.

In brief: It's open for business again and they even offered free rides during the first weeks. Five stations are open for docking, including Pinagbuhatan in Pasig, Guadalupe, the Philippine Polytechnic University in Sta. Mesa, Escolta, and Plaza Mexico. The ferries will service passengers from 7 a.m. to 6 p.m.

Yay: Since it opened, it was reported to have served around 5,000 passengers. It's not a staggering number yet, but it is a pretty decent alternative to being stuck on concrete for hours. The MMDA is looking to charge P25 to P50 per passenger, which seems like a reasonable amount. Aside from this, the ferry service is also a way to attract tourists. In particular, Chairman Francis Tolentino is proposing the revival of Escolta as a destination site.

Nay: Some people gave the ferry ride negative feedback due to the stench, while some say that it's not that bad. In any case, it's a good way to encourage people to be mindful of their waste. The operators report that the travel time takes hours, with delays caused by garbage getting caught in the propeler. Anak ng Pasig naman.

Check out 10 Reasons to Revisit the Pasig River.

In brief: The Land Transportation Franchising and Regulatory Board (LTFRB) tested articulated buses on May 7 and it sounds a lot like the failed "MRT Bus" run of 2013...sans the confusion and annoyance it gave the passengers. This time, the dry run went smoothly. The bus picked up passengers from the North EDSA station and dropped them off at Buendia, Ayala, and Taft, going through all possible under and overpasses to avoid traffic.

Yay: Passengers who make the long trip daily appreciated the fact that nobody shoved them into the bus (as is sometimes the process of getting into MRT carriages) and "express" buses-complete with trip schedules-could be an interesting solution to biyaheng langit bus rides along EDSA.

Nay: Legal woes. The owner of the Philtrak Group (Francis Yuseco, Jr.) claimed that the articulated buses infringes on an existing patent that they hold. Yuseco noted that the idea of a bus traveling along express lanes and stopping in dedicated stations has been recognized as his through the Bus Rapid Transit (BRT) system. The BRT is similar to the articulated bus, but is privately owned and managed. (Oh, and yes, traffic.)

In brief: MRT regulars have been "treated" to express trains since May 7, where "skipping" trains go directly to the farthest stations to decrease the waiting time for passengers and speed up the travel by reducing stops. The express trains will run until May 20 and the results will be studied by the management, to see the effects it had on the plight of its passengers.

Yay: If you can get in without hitches, it's not that bad.

Nay: The long lines are still there. Despite signs and markers around the station, some passengers still got confused. Same old, same old?

In brief: The prototype was inspected by US President Barack Obama during his visit, which seemed fitting as the COMET e-jeep was produced by Americans.  It's been making a buzz since 2013 and 20 units were supposed to be deployed by December of that year, but alas, the project hit an unexplained snag. Still, the people behind COMET are staying optimistic, and they are hoping to roll out the project sometime this year. The e-jeeps will operate an SM North EDSA to Monumento route.

Yay: It sounds good on paper. Electricity is cheaper than fuel, the drivers will be paid a basic salary instead of desperately hunting for passengers to make ends meet, and designated stops will be respected. They're even planning on adding solar panels to the jeeps.

Nay: We'll know it when we see it. It's all floating in the air at the moment.

Urban Buzz Mrt Buses Traffic
Your Guide to Thriving in This Strange New World
Staying
In? What to watch, what to eat, and where to shop from home
OR
Heading
Out? What you need to know to stay safe when heading out