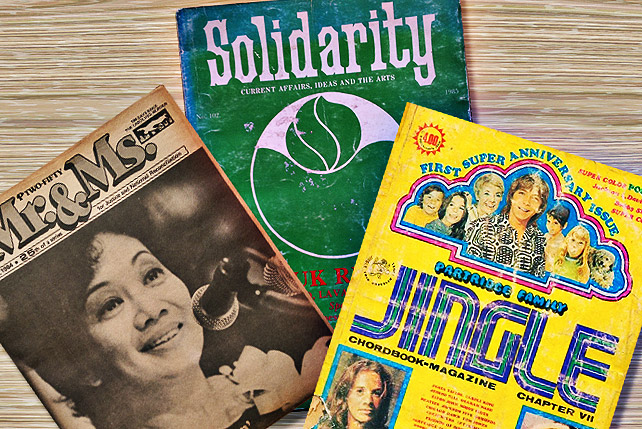 Jingle, Kislap, Mr. & Ms, and more-here are 10 publications still fondly remembered in this era of the cyber-media. 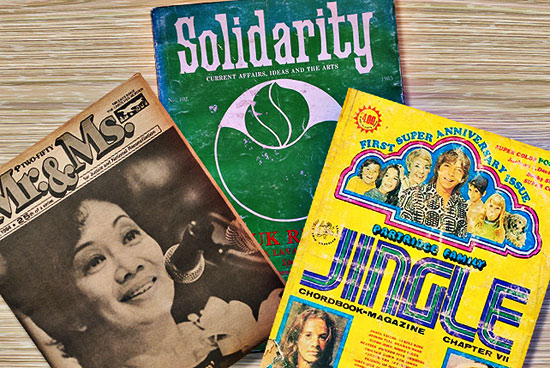 (SPOT.ph) In the long heyday of media as a print enterprise, the industry produced many exceptional newspapers and magazines that still remain standards of journalism even in this era of the cyber-media. Here's a list of these publications which have since called it "30" (as the quaint expression in journalism goes), after the pressures of time and economics. Several of their "contemporaries" are actually still around, having transitioned to cyberspace or stubbornly staying in print as a shadow of their former glory. But a certain nostalgia for excellence has sustained the memory of these defunct publications, which cover everything from politics to entertainment. Here they are-10 publications we miss. 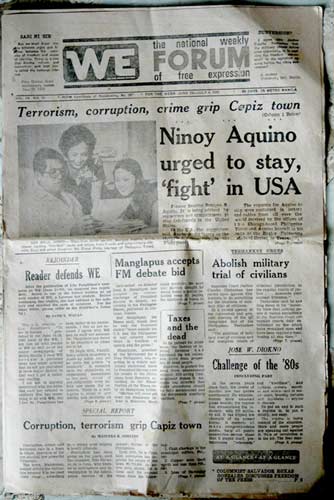 Until the Aquino assassination in 1983, We Forum was the only independent publication during the Marcos dictatorship. Image from krguda.wordpress.com

This is the one enterprise that attests to the patriotism of journalist, editor, and farmer Joe Burgos Jr.-who put out this openly critical paper at a time when the Philippine press was under the gun and censorial watch of the Marcos dictatorship.

Amid those circumstances, We Forum 's distribution was carried out in clandestine, guerrilla fashion. A veteran of this newspaper recalls to us how the staff had to improvise their newsroom frequently, relocating to different offices because the Constabulary was already in pursuit. But We Forum sustained this press-freedom crusade from 1977 to 1982, when a story on Ferdinand Marcos's fake war medals finally provoked the government to arrest Burgos. But his case drew the attention of international human-rights activists. It was only a matter of time before Ninoy Aquino's assassination in 1983 unleashed the public's outrage against the dictatorship and, along with, the spontaneous revival of the free press. It's a bitter irony in the life story of the Burgos family that his activist-son Jonas would be abducted by military agents in the post-Marcos milieu. It was clear at this point how much the Burgoses have sacrificed their own welfare for the motherland. Check out this fond portrait of Joe Burgos by a former associate, Lourdes Molina-Fernandez. 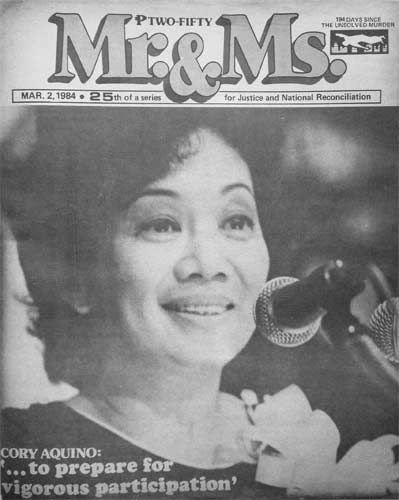 Months after her husband's assassination, Cory Aquino, as featured in Mr. & Ms., steps into the political stage to lead a divided opposition.

We Forum paved the way for the proliferation of what the Marcos dictatorship derisively labeled as the " mosquito press"-as opposed to the heavily-censored crony press that dominated media circulation during martial law until the Aquino assassination. Thereafter, the so-called mosquito press gave the crony press a run for their money, as it thrived without advertising , selling like hotcake on the streets and consumed by a public that was hungry for uncensored news. Burgos' Malaya (the newspaper that succeeded We Forum ) and Eugenia Apostol's Mr. & Ms. led this spontaneous industry, especially in terms of comprehensive reportage. Mr. & Ms. stood out from the pack because it took off from a women's magazine, and this transition reflected the changing moods of their middle-class readership, which, like any other sector, became outraged by the Aquino assassination. Yet despite their protest-fueled success, Mr. & Ms. and Malaya still faced the threat of government retaliation. They kept at it, nevertheless, until the People Power Revolution that ousted  Marcos. Mr. & Ms. eventually led to the Philippine Daily Inquirer. 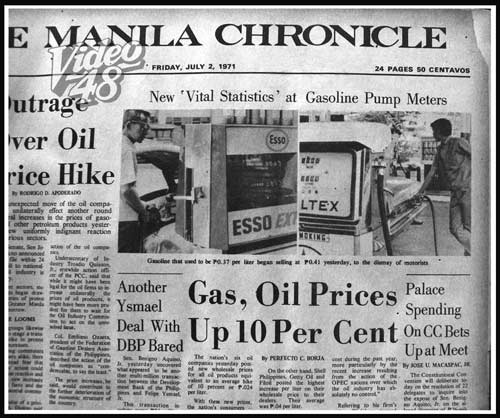 An issue of the Manila Chronicle,  about a year before it was shut down by martial law. Image from the Video 48 blog

The Manila Chronicle was a key component of the Lopez media empire before martial law. The family's increasing alienation from Marcos eventually informed this newspaper's tone. But apart from that political consideration, the Chronicle stood out as a model of journalistic excellence, both in terms of reportage and commentary. Amando Doronila and I.P. Soliongco were among the newspaper's star editors and writers. Inevitably, the newspaper became a casualty of the coming Marcos dictatorship. It was raided and shut down by government troops on the night of martial law, its publishers exiled and its writers imprisoned. The Chronicle was revived after People Power, this time on the watch of a younger generation of brilliant journalists, but after the Lopezes sold this paper to another party, the Chronicle eventually wrote 30. 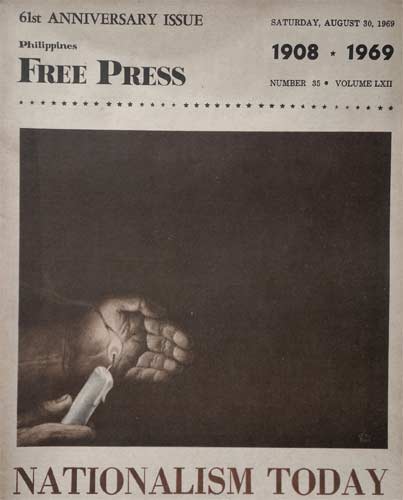 Like the Chronicle and the Manila Times, the Free Press was also a casualty of martial law. This wasn't the first time the magazine was forced to shut down, because during the Pacific War, its editors and writers also ceased publishing the Free Press as they joined the guerrilla movement. But from 1908 until well into the Ramos and Estrada years , the Free Press became a renowned, bitter enemy of official cupidity, as well as bad English. The magazine championed the cause of good government as its journalistic raison d'être, along with upholding Philippine literature. The Free Press roster through the years reads like a who's who in Philippine letters-from Leon Ma. Guerrero to Nick Joaquin, Gregorio Brillantes, Pete Lacaba, Teddy Locsin Sr. and Jr., and Manuel L. Quezon III. Because of its independence, the Free Press became a natural enemy of Marcos and its editor, Locsin Sr., was jailed together with Ninoy Aquino and the others. For more on the Free Press, also check out A Cartoon History of the Republic. 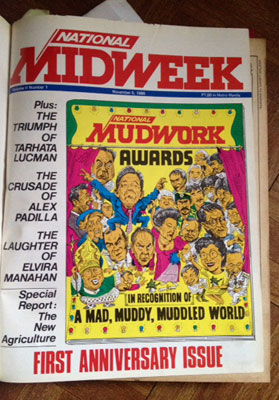 Midweek came out in the wake of People Power as a progressive-oriented newsmagazine. It was edited by Gregorio Brillantes and Pete Lacaba, among others, and it also had a fascinating, comprehensive arts and entertainment section that highlighted the best in the Philippine arts. The magazine had a stellar roster of writers, photojournalists, and artists, including Jingle alumnus (and now Philippine Star editor) Juaniyo Arcellana, and Free Press veteran Danilo Dalena. Recently they had a reunion to celebrate a lapidary time in Philippine journalism. 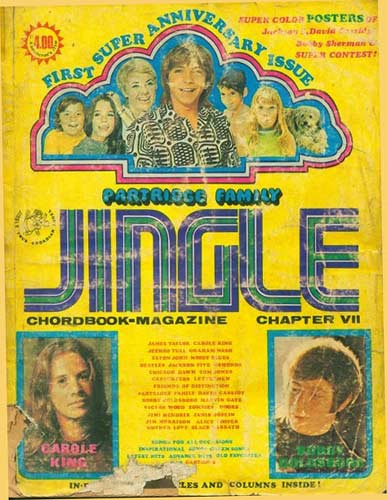 A copy of Jingle from the collection of Nonoy Banzon, as published in Interaksyon

Jingle magazine came out during the dark early years of martial law to uphold an alternative scene that rejected the political circumstances of its time. The magazine also complemented the birth of Pinoy rock, which it dutifully chronicled, and it pioneered the songbook sub-genre of Philippine publishing, transcribing the Beatles and other hitmakers  in that dark and dingy office on P. Tuazon, Cubao, which the police mistakenly raided time and again, all because it was a next-door neighbor to a popular honky-tonk on that street. The magazine's roster reads like a who's who in the country's counter-culture scene-among them, Roxlee, Joey Ayala, Juaniyo Arcellana, Ces Rodriguez, Bert Write, Eric Caruncho and Pocholo Concepcion (both now with the Inquirer ), and Edwin Sallan (currently with Interaksyon ). For a loving tribute to Jingle, check out this article from Rogue. 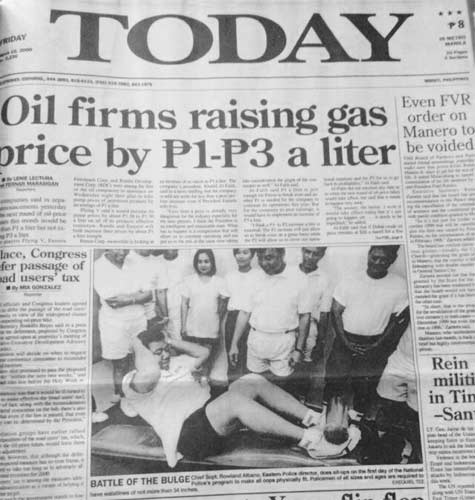 Like Midweek in the 1980s, Today newspaper, especially during its heyday in the '90s, carried on the Free Press tradition of zeitgeist journalism to reflect the materialism of the Ramos years and the increasing diversity of Philippine society by this time. Led by Teddy Locsin Jr., the newspaper  had an impressive staff, including veterans like Dan Mariano and Lourdes Molina-Fernandez,  and young rising journalists like Jessica Zafra, Mia Gonzalez, Lourd de Veyra, and Ramil Digal Gulle who also excelled in poetry and fiction. 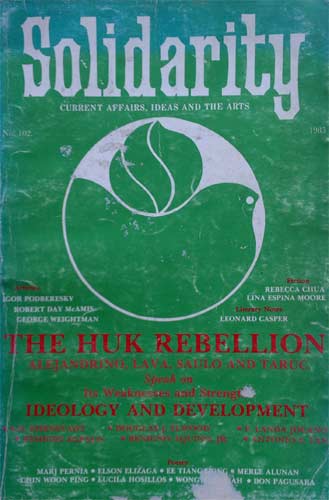 F. Sionil Jose's Solidarity journal was a peculiar character, as it were, among the publications that emerged in the 1960s onwards. The monthly magazine came out in pure text, with no photos, only articles by the leading writers in politics and culture who covered the Philippines in relation to its Asian region. Solidarity was a pioneer in that regard, because it presented, purely through writing, a full portrait of Asia, decades before this milieu was celebrated again in cinema. When the focus was on the Philippines, the picture was just as thorough. Among the contributors of Solidarity were Mochtar Lubis of Indonesia, Sulak Sivaraksa of Thailand, and a certain Ninoy Aquino. 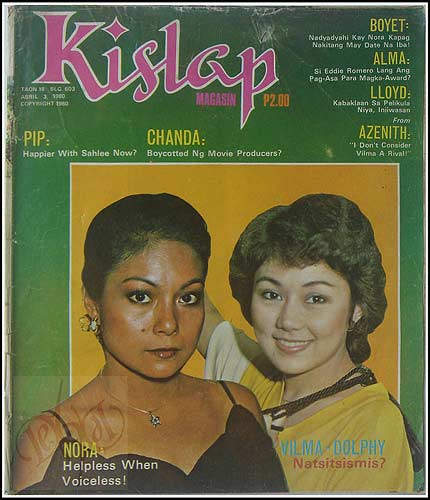 The two brightest stars of the ’70s, Nora and Vilma, on the cover of Kislap

Going back to pop culture, we pay a nod to a showbiz magazine that was notably referenced in a George Estregan movie alongside Jingle. Such were the popularity of these two magazines which covered the complexity of our pop culture and paved the way for Yes! In retrospect, the already hard-to-find Kislap now assumes the status of a cultural treasure, providing a window to a scene that Filipinos embraced wholeheartedly for lack of anything else to affirm back then. 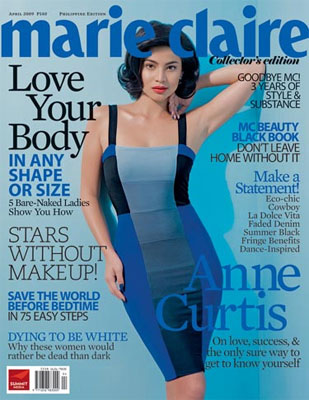 We may be a bit biased, but Marie Claire Philippines was arguably the first magazine in the country that knew its readers were stylish and smart, publishing stories on the latest fashion trends alongside features on girls getting kicked out of school for being gay or the proliferation of Filipina mail-order brides brought on by the Internet. From late 2005 to 2009, the magazine highlighted strong, accomplished women, proving that Filipinas can have both style and substance.

Print Media Martial-lawera Martial-law Era Post-marcos Era
Your Guide to Thriving in This Strange New World
Staying
In? What to watch, what to eat, and where to shop from home
OR
Heading
Out? What you need to know to stay safe when heading out