A Bill of Rights for taxi passengers, a new Christmas song courtesy of Kristen Bell, and more. 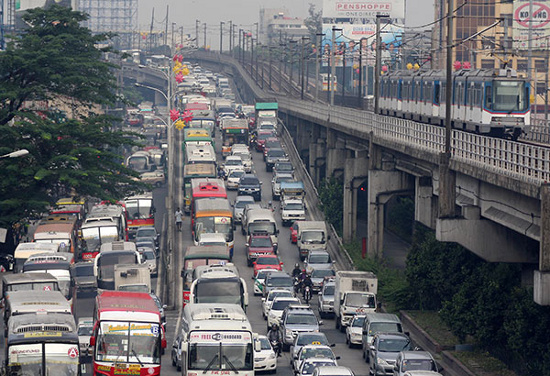 Meanwhile, the MMDA also wants an explanation from the Department of Public Works and Highways regarding delayed road projects. Tolentino said many road repairs and flood control projects are still ongoing and some of them are located near malls.

2. Lawmaker seeks passage of Bill of Rights for taxi passengers

Valenzuela City Representative Sherwin Gatchalian has renewed his push for the passage of a proposed "Bill of Rights for Taxi Passengers" to protect them from picky cab drivers. "They pick passengers on their own terms, refuse carriage for some destinations, force you to pay an extra amount on top of the meter bill, are discourteous and trick most passengers on circuitous routes to earn extra money," he said in the bill's explanatory note. The bill has been pending since January 2014.

At the resumption of Senate Blue Ribbon subcommittee hearing on the overpriced construction of the Makati City Hall Building II and other allegations against Vice President Jejomar Binay, architect Danilo Alano of the Philippine Institute of Architects said that based on estimate, the construction of the 10-storey school building should range from P536 million to P644 million.

Early this month, critics of Binay claimed that the construction was overpriced by P862 million or by almost 300 percent.

Eager fans of the popular franchise’s reboot will have plenty of fun with the film’s new website, launched by Universal on Tuesday. The website features a countdown clock (to a trailer, perhaps?), the current weather and latest news in the fictional dinosaur park, and some clues about the movie’s possible plot. Directed by Colin Trevorrow and starring Chris Pratt and Bryce Dallas Howard, Jurassic World is slated for release on June 12, 2015.

Sometimes, the only holiday greeting someone will ever get is a one-dimensional, emoji-filled text. Kristen Bell and the a cappella group Straight No Chaser teamed up to poke fun at the modern-day season’s greeting with a little song (and video) entitled "Text Me Merry Christmas."

Former Makati City Vice Mayor Ernesto Mercado on Tuesday bared six more properties in Makati City that were allegedly linked to Vice President Jejomar Binay and his family. These included a unit at The Peak Tower Condominium under the name of a certain Ariel Olivar, surveyor at "Hacienda Binay" in Batangas; and two other units owned by Celso Santiago, the uncle of Binay's wife and former Makati Mayor Elenita Binay.

Joan Tarshis, the former actress who is the latest woman to accuse Bill Cosby of raping her, detailed the graphic nature of the assault for the first time on camera on CNN Tonight. Tarshis didn’t hold back as she revealed how Cosby had first raped her when she was 19 years old after taping an episode of The Bill Cosby Show, adding that he had drugged her.

When asked why she didn’t tell the police, Tarshis explained, "First of all no one else had come out, I didn’t know his history. I assumed I was not the only girl that he was doing this with, but who’s going to believe me? Bill Cosby the all-American Dad, the all-American husband, Mr. Jell-o, the guy everybody loves. Who would believe me?"

Taylor Swift is set to make her return to the Victoria’s Secret stage where she’ll perform alongside Ed Sheeran, Ariana Grande, and rising star Hozier. The highly anticipated show will be on December 9.

9. 10 Favorite Quotes From My Name is Kim Sam Soon

In case you didn’t already know, the famed television series My Name is Kim Sam Soon is actually based on a novel of the same name. We give you 10 favorite quotes from the recently released book translation.

Match your delicious meal with beautiful ambiance, whether it’s luxurious marble countertops, an artfully arranged display of pastries, or tiled floors in cheery chevron. These 10 restaurants certainly know how to set the scene.