A first look at Pitch Perfect 2, a glimpse inside Crate and Barrel, and more. 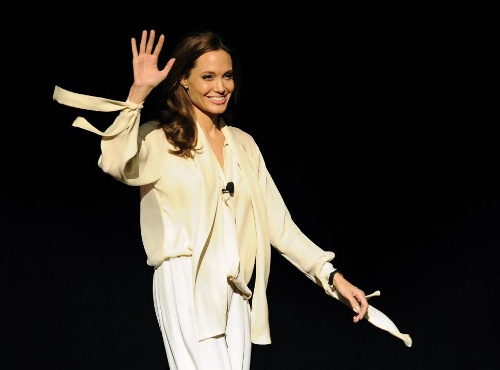 ...at least according to a recent interview in Du Jour magazine. For her, it’s just a matter of when. Not to worry, though! She still has several upcoming films, including this year’s Unbroken and the highly anticipated By The Sea, which she directs and co-stars in alongside her husband Brad Pitt. She says, however, that she is "much happier" directing.

2. Your first look at Pitch Perfect 2

Fans of this breakout comedy will have a first look at the sequel, courtesy of Entertainment Weekly. Spoiler alert: the beloved Barden Bellas have split up. Find out why when it hits theaters May 2015.

The United Nationalist Alliance (UNA) party said Wednesday that former Makati City Vice Mayor Ernesto Mercado should undergo a lifestyle check. According to UNA which is led by Vice President Jejomar Binay, Mercado owns questionable properties in various parts of the country which could be used against him including two large resorts in Coron, Palawan.

4. Bongbong calls for end of feud between Aquino and Marcos families

On Thursday, Senator Bongbong Marcos called for the end of the decades-old feud between the Aquino and Marcos families. "That's something that would be good for the country. Kasi alam naman natin itong away na ito na hanggang ngayon ay tuluy-tuloy pa. Ito'y sagabal sa pagkakaisa dito sa bansa. Kailangan we have to get past it...put it behind us. Ang daming kailangang gawin," he said.

5. Ex-QC execs face up to 10 years in prison for Ozone Disco tragedy

The Sandiganbayan Fifth Division on Thursday found seven former officials of the Quezon City engineer’s office and two private individuals guilty of graft in connection with the deadly fire at Ozone Disco in 1996, 18 years after the tragedy claimed 162 lives. They were sentenced to six to 10 years in jail.

Private respondents Hermilo Ocampo and Ramon Ng, members of the board of directors and stockholders of Westwood Entertainment Co. Inc. which managed the disco, were also found guilty of similar charges.

Acting Health Secretary Janette Garin has admitted she may have committed some "lapses" in visiting the Filipino peacekeepers from Ebola-stricken Liberia unprotected, but said she "will not do it without proper protocol on the proper guidance of the experts."

Despite alleged inconsistencies the Securities and Exchange Commission (SEC) found in regulatory filings of Antonio Tiu’s companies, the businessman entangled in the Senate probe on the supposed ill-gotten wealth of Vice President Jejomar Binay on Thursday defended his firms as fully compliant when it comes to disclosure requirements of the corporate watchdog. He noted, however, that he is willing to have his companies further investigated to support his claim.

From chic and cozy bedding sets to smart storage solutions, we give you a glimpse inside the new home furniture and accessories haven at Mega Fashion Hall.

Take a peek inside O2 Space, where creative freelancers and start-ups have an optimal and functional workspace that’s modern and open.