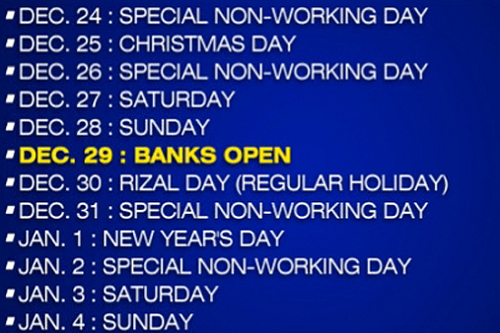 1. Only one banking day from December 24 to January 4

Time to plan ahead! With Christmas just around the corner, you’re bound to do some last-minute shopping for gifts or food for your holiday feasts. According to ABS-CBN News, from December 24 to January 4, banks will only be open on December 29 as all other dates either fall on a weekend or are considered holidays.

On Monday, Manila City Mayor Joseph "Erap" Estrada announced that he "plans to retire" come 2016, effectively squashing rumors of a second term in office. "I have a very good Vice Mayor to continue the projects that I have started," he said. "I already committed to my Vice Mayor. He is very much qualified." That Vice Mayor would be Isko Moreno, who served as councilor for three terms in the city’s first congressional district.

3. No to Bongbong as running mate, says Binay

Holding firm Metro Pacific Investments Corp. (MPIC) has renewed its offer to expand, operate, and rehabilitate the Metro Rail Transit (MRT) 3. "We are proposing that the DOTC no longer subsidize the MRT," said MPIC President Jose Ma. Lim, adding that their plan would involve the undertaking of repairs to "improve the level of services."

The MPIC’s plan includes doubling average fares to P28, which Lim clarified would only be implemented after the rehabilitation and expansion plan is completed. The MPIC argued that the increased fare was still lower compared to average bus fares of over P40 for a similar route.

A new low pressure area (LPA) entered the Philippine Area of Responsibility (PAR) on Monday but it is not expected to intensify into a cyclone in the next 24 hours, says state weather bureau PAGASA. The LPA was spotted 780 kilometers east of Mindanao. Once it intensifies into a cyclone, it will be named "Seniang."

Meanwhile, some parts of the country including Metro Manila will be cloudy with light rains.

R.A. 10650 also mandates that students in these programs should be given "access to all privileges, opportunities and entitlements that a student similarly situated under the conventional system of instruction may have access to." The system gives students access to education "regardless of age, geographical location, and economic situation."

Director Terrence Malick is back with a new film Knight of Cups, which tackles the glitz, glamour, and excess of the movie business. Christian Bale topbills the film as a man caught in the fast and tempting lane of Hollywood. Cate Blanchett, Natalie Portman, and Antonio Banderas also star in the film, which has yet to have a release date.

8. Amal Clooney is Barbara Walters's Most Fascinating Person of 2014

Every year, Barbara Walters releases her list of the 10 most fascinating people of the year but singles out one person who, well, is the most fascinating, obviously. This year, it’s human rights lawyer Amal Clooney, who joins an impressive roster of other "most fascinating" individuals, including Nelson Mandela in 1994, Mother Teresa in 1998, J.K. Rowling in 2007, and Hillary Clinton in 2003 and 2013.

In a two-hour special that aired Sunday, Walters said, "Amal Alamuddin-known now as Amal Clooney-is suddenly in that stratosphere that we reserve for the Jackie Os or the Princess [Dianas] or Kate Middleton. That is, everything she does, says or wears is officially fascinating."

2014 might almost be over, but it’s never too late to indulge in sweets. Lori Baltazar of Dessert Comes First recounts the year’s best when it comes to the tempting and delectable, from standout cakes to comforting pie to even a dish inspired by the King of R0ck ’n’ Roll himself, Elvis.

If you’re still scrambling to find Kris Kringle and Secret Santa presents, we make your life a lot easier with our easy-on-the-budget gift guide. We promise it’s chock-full of cute and quirky knickknacks, perfect for any exchange gift theme you can think of.