Manila gets a "Best City" nod from the Wallpaper* Design Awards 2015
Loading
Already a member? Log in
No account yet? Create Account
Spot.ph is your one-stop urban lifestyle guide to the best of Manila.

They mentioned corruption and they still love us!

(SPOT.ph) Manila...well, technically Metro Manila is getting more love from Wallpaper* Magazine. Our beast of a metropolis was recently inducted in their City Guide series, with Cheryl Tiu and Kissa Castañeda-McDermott introducing everyone to our crazy world. Here’s what they said about Forbes Park: "...an exclusive enclave of embassies, modernist bungalows and a few new-money monstrosities."

The book makes no effort to mask the ridiculous parts of the city and this honesty has paid off. Flaws and all, Manila is officially on the shortlist for Best City in the Wallpaper* Design Awards. Don’t act so surprised. We give you plenty of reasons to love local (See: SPOT.ph’s Best of Manila 2014: 50 Things to Eat, Drink, Do, See, Buy, and Try in Manila). 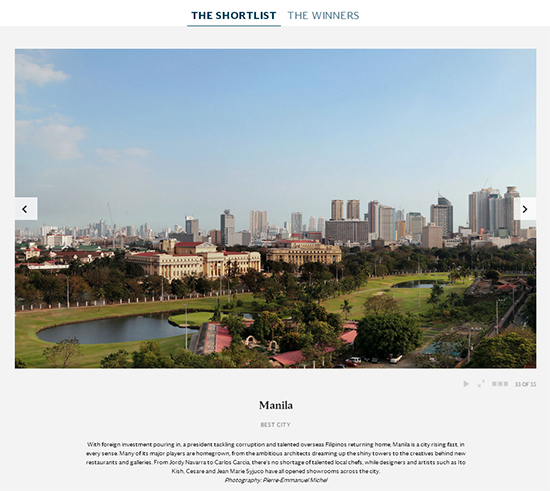 Here’s what they said about us:

"With foreign investment pouring in, a president tackling corruption and talented overseas Filipinos returning home, Manila is a city rising fast, in every sense. Many of its major players are homegrown, from the ambitious architects dreaming up the shiny towers to the creatives behind new restaurants and galleries. From Jordy Navarra to Carlos Garcia, there's no shortage of talented local chefs, while designers and artists such as Ito Kish, Cesare and Jean Marie Syjuco have all opened showrooms across the city."

We want to say, on behalf of the citizens of this awesome city by the powers bestowed on us by us, that we’re just happy to be nominated. Let’s find out on January 8 if we can beat Chicago, Paris, Hamburg, and Tokyo.

For more on this story, log on to Wallpaper.com.

Wallpaper* Cityguide Phaidon Wallpaper*designawards Manila Metromanila
Your Guide to Thriving in This Strange New World
Staying
In? What to watch, what to eat, and where to shop from home
OR
Heading
Out? What you need to know to stay safe when heading out