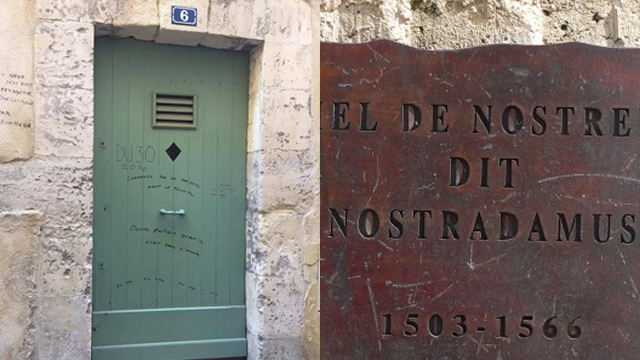 5 Funny Theories Behind the "Du30" Writing at Nostradamus's House 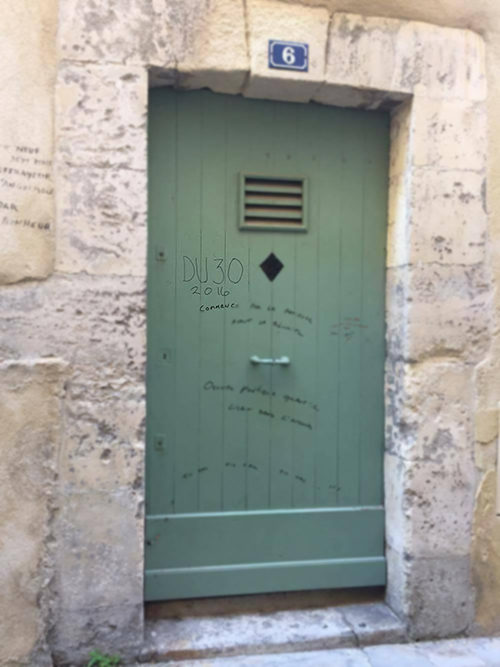 (SPOT.ph) The "DU30" fever has definitely caught on even after the May elections, and now it has also found its way to France. A still yet to be indentified person has written "DU30" on the front door of Michel de Nostredame's (a.k.a. Nostradamus) house in Salon-de-Provence in southern France, which got us thinking: Taking the advice of Presidential spokesperson Ernesto Abella to "use (our) creative imagination," we've come up with a few theories on how the writing made its way to this historic site.

Someone got too excited with brand-new black markers

The teal door was just too inviting! It already has other writings so why not join in on the fun, right?

A Duterte fan wants to live there

Musée "La Maison de Nostradamus" used to be the childhood home of the 16th Century French seer and was owned by his mother's grandfather, Jean de Saint-Remy. Who wouldn't want to breathe in that history day in and day out?

Someone wants free entrance to the museum

Entrance to "The Home of Nostradamus" Museum costs €4,80 (P258.94). It's not much, but you have to take into consideration that flights to France don't come cheap. Tagging the door with an obviously Filipino symbol will not only help the vandal get in for free but also get dibs for the whole Philippine population. That's what you call para sa bayan.

Suspicious websites such as pinoytrending.altervista.org and trendingnewsportal.com reported in May that someone from social media claims that Nostradamus actually predicted Duterte's presidency in the Philippines. After all, social media and dubious sites are such credible sources of information. The prophecy can be read in the famous prophet's book, The Land of Promise. Some verses that point to Philippine references are: "The sun of divinity holding the eighth fire will burn all nations having the power of the three stars" (Philippine flag), “At the Southern area He will be born in the Year of the Serpent,” (Duterte was on his first year as Davao City mayor on 1989, also known as the Year of the Snake in the Chinese zodiac), and "This is the Glory of all Glory, the Hope of all Ages is born at the City of Eagle" (Davao City). So believable, right?

Sarcasm Satire Humor Funny Duterte Nostradamus
Your Guide to Thriving in This Strange New World
Staying
In? What to watch, what to eat, and where to shop from home
OR
Heading
Out? What you need to know to stay safe when heading out