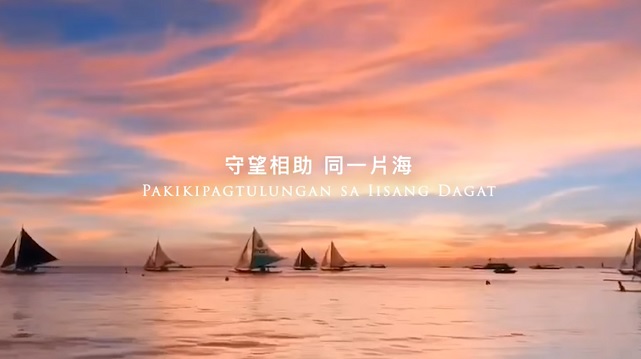 "Iisang Dagat": The Wildest Lines That Got Our Attention

We wrote down the lyrics so you don't have to.

(SPOT.ph) Remember just a few days ago when the Chinese embassy released a feel-good anthem meant to rally the, uh, totally good and blemish-free relations between our two countries amid the COVID-19 pandemic? No? Managed to wipe the memory from your brain already? Well, we're here to refresh your brain cells; Ignoring your problems won't make them go away, as they say.

The lyrics were penned by Chinese Ambassador Huang Xilian, as explained in the video's caption—which is, in itself, already a goldmine for quotable quotes. It is dedicated to frontliners from both countries, "especially the China Medical Expert Team to the Philippines," because, of course, this is their embassy, after all.

Aside from the caption though, the lyrics paint a very optimistic future—for a "one sea" apparently. Whose sea? We don't know. Whose perspective is this?  Both of us? Ours? May tayo ba? What kind of a relationship is this? So many questions, so many thoughts, so many possible meanings. And in case you wanted to go beyond a knee-jerk reaction, we invite you to check out a couple of lines from the short song. There's a lot of hopeful imagery in it. Prepare your eyebrows for some intense furling or raising.

These lines from "Iisang Dagat" deserve a close reading:

China's claims over the West Philippine Sea—using their "nine-dash line" to take basically the entire seas surrounding Vietnam, Malaysia, and the Philippines—has already been proclaimed unlawful by a historic decision by the United Nations Arbitral Tribunal in The Hague, Netherlands in July 2016. Despite this, China has continued to develop in the disputed territory, establishing two new districts—one on Spratly Islands, the other on Paracel Islands—in early April.

Just a few days before the Chinese embassy released their video for "Iisang Dagat," Foreign Affairs Secretary Teodoro Locsin Jr. tweeted that the Philippines filed two diplomatic protests to the embassy—ironic, we know. One on China's claims over Philippine territory and the other on a Chinese ship's "pointing of a radar gun" at our navy ship in our waters. Both diplomatic protests have been declared "strictly confidential," by the Department of Foreign Affairs. If anything, at least we now have a new song we know not to sing at karaoke.

Adventurer Savvy Seasoned Tpc-000001 China Imelda Papin
Your Guide to Thriving in This Strange New World
Staying
In? What to watch, what to eat, and where to shop from home
OR
Heading
Out? What you need to know to stay safe when heading out