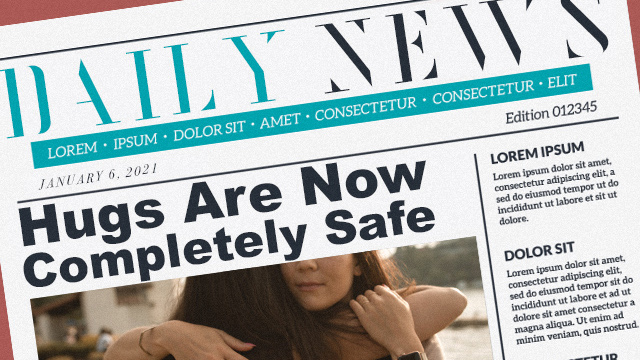 10 Actually-Good Headlines We Want to See This Year

How does "No More Traffic on EDSA" sound to you?

(SPOT.ph) We can’t blame you if headlines are the thing you hate most on and off Earth right now. Each headline from the past year was probably just another notch on your anxiety meter as you scrolled through your feed; TBH, not even Black Mirror could have done better. Still, in the spirit of optimism, we thought up a couple of headlines that won’t send you into a downward spiral. Think of it as The Onion, but wholesome (Read: The opposite of yank-your-hair-out absurdism). Fingers crossed 2021 is the year headlines—and the world in general—takes a turn for the better.

Finally, some good (still fictional) Actually-Good Headlines we really want to see in 2021:

COVID-19 Vaccine Completes Testing, to Be Distributed for Free

As of writing, there are several vaccines from across the globe undergoing testing—with some countries already rolling them out to the public. Meanwhile, the Philippines is already in talks to procure the Sinovac vaccine (with an efficacy rate of 50%)—after Health Secretary Francisco Duque III reportedly “dropped the ball” for negotiations to get the much cheaper Pfizer vaccine (with an efficacy rate of 95%), according to Foreign Affairs Secretary Teodoro “Teddy Boy” Locsin Jr. Finger-pointing aside on what could have been, bottom-line is we all just want the damn vaccine already—one that's safe and effective, and yup, for free. We’re glad to point out that several cities in the capital region have already begun budgeting and planning to ensure their citizens are vaccinated soon enough.

The Philippines Has the Fastest Internet Speeds in the World

Internet speeds in the Philippines are no laughing matter—although they are very laughable numbers (the so-sad-it’s-funny kind). We clocked in at average speeds of 25.34 Mbps for broadband in August 2020, per data from Ookla’s Speedtest, landing us on the 106th spot out of 174. And the even harder push towards digital amid the still-ongoing quarantine appears to be making things even heavier for our networks—so you know we’re harnessing all our dreaming powers for this headline. Hey, might as well dream big, right?

Vico Sotto Is TIME’s Person of the Year

Pasig Mayor Vico Sotto was a hot topic all throughout 2020 thanks to how he's handled the quarantine. The young and somewhat inexperienced mayor arguably outshone practically all other Metro Manila city mayors, with the rest of us wishing we could get all the nice things Pasig City had. Social media went into a frenzy with each update regarding the mayor and his administration—from funny moments like their “Panda” friend to a peek at the awesome care packages they prepped for residents under quarantine. TBH, we just want more Filipinos getting the global recognition we deserve—and Vico Sotto is a very good candidate for that.

Voter registration is scheduled to end on September 20, 2021—and will essentially decide what happens during the 2022 national elections. Oh yes, the time for a change of presidency is coming. It may not seem like much to ask for, but we have our fingers crossed everybody comes out to vote—and wisely at that—when the time comes! If you haven’t already, check out our guide to registering while under community quarantine.

No More Traffic on EDSA Thanks to Efficient Transport System

All we want is efficient mobility in Metro Manila—and an EDSA that no longer resembles a parking lot. We’ve already got Skyway Stage 3 happening for us but here’s hoping we crank it up to the highest level and somehow end up with an EDSA that never experiences traffic jams. Oh yes, we’re going there. And while we’re in our delusional state, fingers crossed we get to experience those elevated walkways, new bridges, and subway systems soon enough, too!

Remember when the Department of Environment and Natural Resources decided the logical course of action to take amid a pandemic—with hundreds of people either out of a job or literally dying—was to beautify Manila Bay by dumping white “sand” on it? Yeah, that happened. Well, at least we can all agree that we need to take care of Manila Bay. Especially when even earlier during the quarantine, the bay’s waters turned an unnaturally bright turquoise due to pollutants. Yeah, that happened in 2020, too. Well, we’re not experts either but this guy who planted mangroves in Leyte after the onslaught of Yolanda might just be on to something.

Quinta, Rolly, Ulysses. The succession of typhoons during the last few months of 2020 brought damage far worse than expected—with many pointing to the continuing degradation of our Sierra Madre as the source of all our problems. Floodways, rivers, and dams were unable to keep up with the succession of storms, leading to practically the entire eastern side of Luzon—normally protected by the mountain range’s forests—to become flooded. There have been many calls to reforest our lands from as early as the 20th century, but the sooner we get this done, the better. So don’t forget to plant a tree this year!

Tamaraw Population Picks Back Up

Kalibasib, the last tamaraw bred in captivity in the Mts. Iglit-Baco National Park, Mindoro, died in October 2020. Efforts to repopulate our national animal, now highly endangered, push on with the rangers of the park who protect wild groups from hunters. But when a tamaraw skull sells for as high as P4 million pesos, according to a CNN Philippines report, their mission takes on extreme danger as well. The report states there are just around 500 wild cattle of our national species remaining in the reserve—so we’re hoping a miracle happens in 2021.

Metro Manila is nearing its quarantine anniversary in mid-March of 2021—yes, it has been that long. How are you holding up within your four walls? The national capital earned a reputation for being on the “longest lockdown” amid the many stay-at-home orders across the globe throughout 2020—and it has now officially stretched on to the next year. While some people haven’t been treating it as strictly as they should—remember a certain ironic mañanita celebrant?—we’re heeding the rules until officials finally declare clear orders. Ideally sometime this year, if the vaccine headline becomes real.

And in line with the quarantine hopefully ending soon, we’re hoping hugs can come back too! Sure, the quarantine babies are coming this year—which means some people managed to get some action while stuck at home—but we’re keeping things PG and asking for a good old hug. Call us sentimental, but we just miss greeting friends with a warm embrace, especially the lolos and lolas we haven’t been able to spend time with (in the same room) for months on end. Need a hug? We know we do.

Adventurer Savvy 2020 Humor Covid-19 Environment City Life Edsa Staying In
Your Guide to Thriving in This Strange New World
Staying
In? What to watch, what to eat, and where to shop from home
OR
Heading
Out? What you need to know to stay safe when heading out