According to GMANews.tv, the march was the "biggest yet since the first LGBT Pride March in Asia on June 26, 1994." TFP co-coordinator Ryan Silverio told GMANews.tv that "more than 80 organizers and 300 individuals" registered. The report adds that in 2003, TFP decided to move the march from June to December to accomodate other human rights activities. 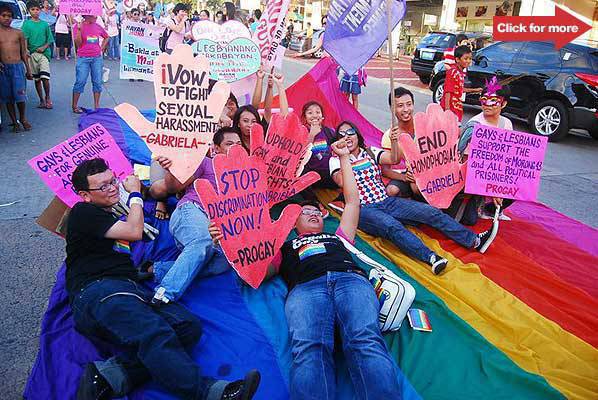 Members of Gabriela and the Progressive Organization of Gays in the Philippine
s (ProGay Philippines) at One Love. Click for more photos.

Anti-LGBT groups were also at the event with signs that read, "It’s not okay to be gay! It’s sin!" and "God did not make you gay!" among others. Some members of the LGBT community who joined the march also held placards with their pro-LGBT statements like, "If God is love, why hate?" and "Religious bigotry is hate!"

The parade started at 3 p.m. and the program followed at 6 p.m. Games were played and prizes were given away to the participants. The program was followed by a street party. Throughout the event, promotional videos were played to encourage LGBT support and HIV/AIDS awareness and prevention.