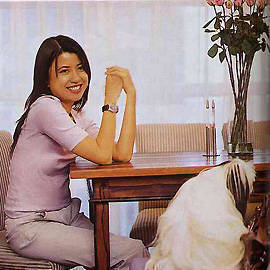 President Benigno "Noynoy" Aquino III and rumored girlfriend, Deutsche Bank stockbroker Len Lopez were spotted together watching a choral concert at the Cultural Center of the Philippines the night of January 8, Saturday. They watched TATLO: A Choral Celebration at the CCP Main Theater which featured Ko Matsushita and the Gaia Philharmonic Choir from Japan, Jennifer Tham and the SYC Ensemble Singers from Singapore, and Jonathan Velasco and the Ateneo Chamber Singers (ACS) from the Philippines.

President Aquino and Lopez were inconspicuously seated at the balcony above the orchestra. According to SPOT.ph’s source, rumors were rife that night that the President would be watching the concert but the audience couldn’t really spot him in the crowd until ACS conductor Jonathan Velasco acknowledged him and thanked him for his presence. President Aquino was later requested to come down to have his photo taken with the Japanese and Singaporean choirs, and he gamely acceded, to the delight of the choirs. Adds our source, "After the photos, the President left before the crowd was let out. Len remained in the balcony, inconspicuous the whole time."

Meanwhile, look what SPOT.ph found in the March 2006 issue of Real Living: an inside look at Lopez’s Makati condominium unit described as "Manhattan-looking-eclectic but refined" by her interior designers from the LLP Design Group. The feature provides a glimpse into the likes, life and world of the younger Lopez and her dog Sabine.

Len Lopez with her dog, Sabine. Click for more photos.

Lopez may not even live in the same place anymore, but at the time, the jetsetting stockbroker decorated her apartment with knick-knacks from her many travels, such as prints from an open-air market in Sydney, salt and pepper shakers from Hong Kong, and framed photographs she took during visits to Paris and New York. A tiger kamagong table, custom-made in Tarlac, was the centerpiece of the dining room. In the master bedroom with sage green walls, Lopez had a queen-sized sleigh bed with a "super-stuffed" mattress. Her guest bedroom, which doubled as a makeshift office and walk-in closet, also housed a stack of custom-made shoeboxes with acetate panels. "I think every girl has a shoe fetish," Lopez told Real Living.