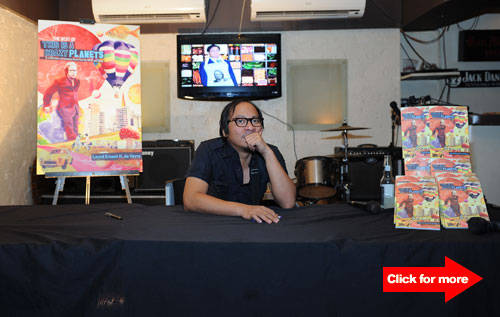 Lourd de Veyra at the launch of his blog-turned-book This Is A Crazy Planets. Click for more.

(SPOT.ph) All roads, flooded and otherwise, led to Route 196 on Katipunan Avenue on the dark and stormy "Falcon"-blessed night of June 23 for the book launch of The Best of "This Is A Crazy Planets" by SPOT.ph blogger, satirist, poet, four-time Palanca award recipient, Radioactive Sago Project vocalist, TV personality-and just recently, SPOT.ph’s No.1 Sexy-Ugly Hottie-Lourd Ernest H. de Veyra. The book features 30 of his best blog entries (plus some never-before-published pieces) that dissect the nitty-gritty of life in Manila and Pinoy pop culture the way only Lourd can.

This Is A Crazy Planets is now available at National Book Store (The Podium, Galleria, Rockwell, Market! Market!, Robinsons Forum and Ortigas) and Fully Booked (Serendra, Rockwell and Shangri-La) at P195. Watch for copies in more bookstores and newsstands nationwide soon.