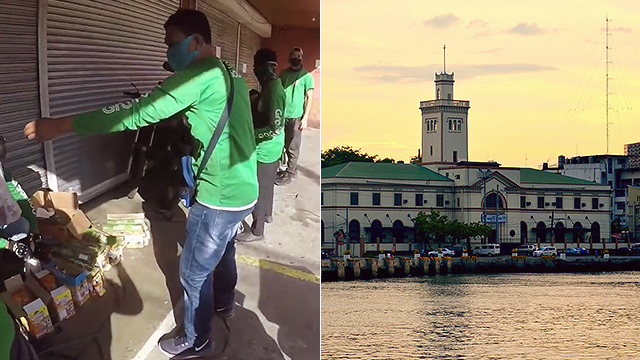 It's their way of helping out frontliners.

(SPOT.ph) There are a lot of reasons Iloilo City has been dubbed the “Wakanda of the Philippines.” The city pushed for a COVID-19 testing facility early on, (the Western Visayas Medical Center was accredited on April 6), local businessmen pooled together to purchase test kits for all, and it seems everyone is doing what they can to help out—including their GrabFood riders.

Much like Metro Manila, food delivery riders are among the people authorized to be out of their homes in Iloilo City. The entire city was put under quarantine as early as March 21—even without a confirmed case of COVID-19—leaving only essential workers and other frontliners to keep Iloilo City on its feet. It was during the first few days of the quarantine that 34-year old Argie Garalda, a GrabFood rider, found himself at a snack bar on break from delivering food in a mostly empty city. The drivers were able to continue working and delivering food, adhering to the new contactless standard, and they had front-row seats to the situation on the ground. A fact that got Garalda and his fellow delivery drivers talking and deciding that there was something more they could do for Iloilo City.

No Act Too Small

Garalda then reached out to the Grab office in Iloilo City to ask if he could make an official announcement to all the food delivery drivers, asking if they would like to help out. “Ambag-ambagan lang at magbigay ng pagkain sa frontliners,” says Garalda. The idea wasn’t a grand donation drive, but something that they could all do within their capacity, no matter how small.

On March 27, the GrabFood drivers went around Iloilo City and gave out food packs filled with snacks and drinks to frontliners: uniformed personnel at their stations, barangay officers, health workers, all the way up to folks at the city pier.

That was the first time the GrabFood drivers worked together to bring a little something to Iloilo City folks. They were able to distribute to at least 100 people or so, says Garalda happily. “Ang sabi ko, ‘bawat isa sa atin, mag-produce lang ng kahit sampung food pack.’ Kung sobra, mas okay din.” At the time, it was the same group of the original nine drivers at the snack bar: Garalda, Franklin Jucaban Jr., Karl Jed Joseph, Jonel Jeonie Jr., Edgie Maprangala, Joseph Esola, KF Pan, Fredelyn Villan, and Shane Grapa—but that number quickly grew after the success of their first handout.

After the first bayanihan, the riders were able to come back even stronger. Garalda explains that cash donations—part of which came from the Grab office admin—came in and they were able to buy more groceries to distribute. The riders were also digging into their own pockets for the donations. By April 2, the second time around, there were around 35 GrabFood drivers who helped out—and they were able to shoot the event and make a vlog about it. “Nagaambag-ambag kami, mga P100 per person,” adds Geralda.

The riders met up on the morning of April 2 at the Iloilo City Grab office before their usual delivery shift. They repacked their food donations and sped out to distribute them to people from all over the city. Afterwhich, most of them went straight to work delivering food. Garalda knows it’s a simple gift, “pantawid gutom lang” but he and the Grab riders know how much that could mean to some. “Kahit sino ka man, hangga’t nangangailangan, tutulungan ka namin. At wala kaming hinihingi na kapalit, konting pasasalamat lang,” says Garalda.

The team of Grab riders have done their bayanihan handout around three times now. They’re not so sure if they can gather enough funds for a fourth time, but Garalda says they’re happy with what they’ve managed to do so far—and would be happier if they could do it just one more time. For now, they’re planning a team outing for the GrabFood drivers once the pandemic has ideally blown over, says Garalda. “Sa GrabFood drivers sa Iloilo, nagmamahalan at nagbibigayan,” he adds cheekily. “Tumatag ‘yong samahan naming Grab riders sa bayanihan.”

There isn’t really one thing that pushed Garalda to start the movement, he says. “Paano ba tayo magiging isang ‘hero’ sa sariling paraan?” he tells us was his question to himself when he realized the pandemic has affected the lives of many in his city. Garalda’s wife is a frontliner herself who works at the Western Visayas Medical Center, a COVID-19 center. She’s been set up to stay at the hospital for at least a month, says Garalda. “Siyempre po hindi mawawala sa atin ang takot, pero ito ‘yong trabaho na pinili namin.”

GrabFood started around January 2020 in Iloilo City, he explains, so most of the people working together now to help through bayanihan are new friends. They all come from different lives, as well. Garalda himself originally came from Guimaras, where he lost both parents at an early age and helped raised his younger siblings. Some were former seafarers who came home; for others, it’s their first job. “Gusto lang naming tumulong, hangga’t kaya.”

The word “bayanihan” has been thrown around a lot during the quarantine period—and for good reason. Life certainly has changed, and there’s no saying if we’ll ever get to go back to the way things once were. Yet for Garalda and the Grab riders of Iloilo—and for many more across the globe—this isn’t something that they're just going to watch from the sidelines as it passes them by.