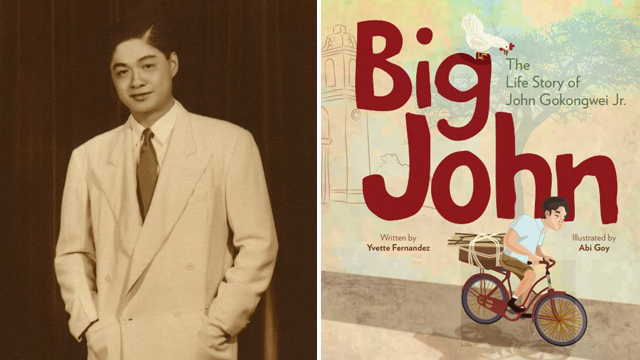 This is the story of John Gokongwei, Jr.

Gokongwei Jr. was born on August 11, 1926. The son of prominent businessman John and Juanita Marquez, he was born into the lap of luxury. His father owned Cebu’s largest movie theater chain at the time, including the first air-conditioned one outside of Luzon, aptly named the Vision Theater. He and his five younger siblings lived with their parents in a Spanish-style villa along Fructuoso-Ramos Street—a fancy estate that even had sculpted gardens and a fountain. Perhaps most importantly though, he had the privilege of entering Vision Theater at any time—after school, that is—to watch all the moving pictures he and his younger brother Henry, and all their friends, wanted to. By all accounts, it looked like Gokongwei Jr. was given the easiest set of cards that life could deal—until he turned 13.

In 1939 and at the age of 34, John died after contracting typhoid, leaving behind a 31-year-old widow and six children—and unfortunately, alarmed creditors worried that his theater chain would fail without him. They came soon after John’s death and before the family had time to process their situation, everything had been seized, from their theaters and even the fancy house the young Gokongwei grew up in. Certain memories stand out from this time for Gokongwei Jr., and he would often tell the story of how his mother once walked home in the pouring rain after being turned away from a relative’s house. Far worse though is the memory of him and his brother Henry being spirited into a movie theater by an old employee, only to be caught by the new owner, kicked out, and forever barred from the place.

Gokongwei’s younger siblings were sent back to Gulangyu, China to be cared for by relatives; he himself was sent to live with a grand uncle. Juanita, once the toast of high society, set to work finding ways to send money to her children; she would cook peanuts for John to sell and even sold her jewelry. Ironically enough, it was at the cusp of a world war that John really began taking the first steps towards becoming the huge businessman he eventually became. As he liked to say, “War was the great equalizer. Everyone had to start from zero and all you had were your wits.” Fortunately for Gokongwei, he had one other asset aside from a very good head on his shoulders: his trusty old bike.

The young Gokongwei and his brother Henry began helping their mother with a very basic buy-and-sell set up: They would load small products like candles and soaps on their bike, then pedal away to neighboring towns to sell their wares. Barely 15 years old, Gokongwei faced competition from much older vendors, but as he would say, he was thankful that his youth meant he could bike farther, sell for much longer, and work harder than his companions. At a period when most kids spend their time playing and studying, the older Gokongwei reflected on his “Bicycle Age” not with bitterness but with pride. After all, he succeeded at becoming his family’s breadwinner so young—and he was just getting started.

Gokongwei was quick to step up his game. At just 15 years old, began joining the batel journeying on the seas to Lucena City, an uncomfortable trip that could last anywhere between five days to three weeks, then taking a truck for five hours before finally landing in Manila. There, he would sell his products and buy more wares to resell back home. Another dangerous hustle the teenager took on was smuggling cigarettes, along with American and Philippine money, under the Japanese soldier’s noses to sell to American GIs—all the while riding his trusty old bike and trying to look as innocent as possible.

Thankfully, the ploy worked and by the time the war ended, his hard work had bared much fruit. Barely 20 years old in 1940, the young Gokongwei had amassed around P40,000 pesos from his tireless peddling, an amount that would equate to around P4 million in the '90s according to TIME magazine. Manila was one of the most devastated cities by World War II and the entire country was in crisis; but for Gokongwei, this meant prime opportunity, and it wasn’t one he was about to miss. From the hard times sprung Amasia Trading, Gokongwei’s first company, which imported American products. By 1948, he had made enough to bring his siblings back home—and with the family together again, it was time for John Gokongwei’s entrepreneurial skills to go into full gear.

Trading Up From A Bike to An Airplane

The next few years saw the Gokongwei siblings living in a two-storey building that served as their office, warehouse, shop, and home; they themselves took on the roles of cashier, collectors, delivery boys, and whatever else was needed. It wasn’t long until the company grew, expanding to Davao and even Manila with an array of more lucrative products (read: cigarettes and whiskey). By the 1950s, John had moved on to manufacturing, setting his sights on cornstarch—the fine, tasteless powder that is needed to make more exciting products like beer and ice cream. In 1957, he and his siblings created Universal Corn Products—the company we now know as Universal Robina Corporation.

He didn’t stop at cornstarch though, as Gokongwei was always on the watch for the next big thing. In the ‘60s, another company of his called Consolidated Food Corporation—which later merged with Universal Robina—created the popular instant coffee brand Blend 45. Not to mention the long list of chips that have us hooked (we have a soft spot for Chippy and Chiz Curlz) and even C2, which somehow managed to turn soda-loving Pinoys on to the cold tea beverage.

Is it just us or would EDSA not be EDSA without Robinsons Galleria? Interestingly enough, the huge multi-use development was made possible thanks to a simple coin flip. In the '90s, both Henry Sy—yes, of SM Supermalls—and Gokongwei were hounding Francisco "Paquito" Ortigas for the prime 5.2 hectare corner lot. Ortigas’ solution was simple enough: the two would flip a coin for buyer’s rights and needless to say, Gokongwei won the coin flip. Years later, Sy was able to buy a nearby property on which Megamall now stands.

At this point, Gokongwei looked about as far away from the Cebu City boy peddling on a bike peddling as possible—but the same spirit lived on. Seeing a future need for cheaper aviation transport, Cebu Pacific was established in 1996. This low-cost airline was the first in the region to pioneer the “low fare, great value” strategy and is just one—albeit possibly the biggest—marker of Gokongwei’s ingenuity. It took more than half a century, but the Cebuano boy had managed to work his way up from an old bike to an entire fleet of airplanes.

On his 80th birthday in 2006, “Big John” as the heavyset man with the booming voice and equally large presence came to be known, surprised everyone by donating half his shares in the JG Summit Holdings conglomerate to different charities through the Gokongwei Brothers Foundation. As a working boy that used to soak up whatever books he could get his hands on during the few idle hours he had—usually on the weeks-long trips on the batel—education was his priority, and not just for himself.

He and his brothers Henry, and Johnson, set up the foundation in 1992 with the single goal of making an impact on education. They’ve so far worked with the University of San Carlos in Cebu City, John’s alma mater, and of course, the business school building in De La Salle University, among many others. The foundation also takes in scholarship bids and even pays for the college tuition of exemplary STEM students.

'Big John" passed away at the old age of 93 on November 9, 2019; while his beloved wife Elizabeth passed on a week later. They spent their last years together traveling and spending every possible Sunday with their large brood. With all the ways Gokongwei influenced the Philippines’ current landscape, it may be hard to imagine that he had his start peddling on a bike—but that is the magic and the legacy of Big John.

As he himself said in 2002, as a 75-year-old addressing the young ones during the launch of the Ateneo de Manila University John Gokongwei School of Management, “Funny, but I often wonder what ever happened to my first bike! The bike that was my companion during those first years when my family had lost everything. I wonder where it is now. That bike reminds me that success is not necessarily about connections, or cutting corners, or chamba—the three Cs of bad business.

“Call it trite but, believe me, success can be achieved through hard work, frugality, integrity, responsiveness to change, and most of all, boldness to dream. These have never been just easy slogans for me. I have lived by them.”