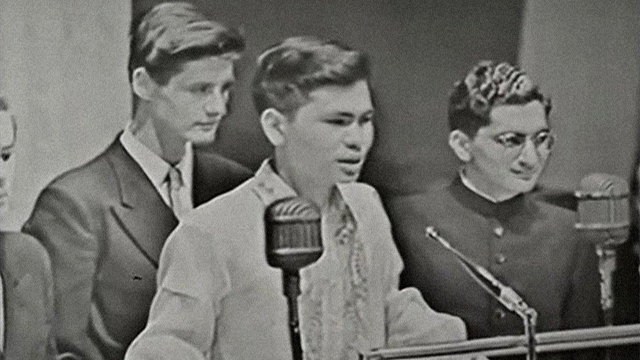 Meet Johnny Antillon, the Filipino Teenager Who Rocked the U.N. in 1954

The story of the man behind a speech that still captivates decades later.

(SPOT.ph) The year was 1954. At the United Nations Headquarters in New York City, a Filipino teenager by the name of Johnny Antillon shares the podium with three fellow kids from India, U.K., and Germany. As children of World War II, they debate on issues such as communism and taxes—and then a charming and impassioned Antillon takes the center and shares his vision of an ideal world.

"If I had lived before the A- and H-bombs I might be less optimistic
of the future. But today I have great hope that we shall enjoy peace, for I
feel deeply that no nation will start a war which none can possibly
survive," says Antillon, nine years after the end of WWII. For a few moments, the entire stadium listens intently to the boy as he shares his dreams, and then erupts into loud applause.

Nearly seven decades later, videos of Antillon's speech in the U.S. have popped up online and captivated a new generation of listeners—including his grandson, Daniel Buenaventura. "I was just so shocked na may footage siya na nag-survive," shares Buenaventura in a call with SPOT.ph. "He would have been so ecstatic," he says of his grandfather, who passed away of natural causes in 2010. "I can already hear him saying, 'I told you so, I was in the U.N.!'" he adds with a laugh.

So what was Johnny Antillon, who must have been around 17 years old at the time, says Buenaventura, doing halfway across the globe in 1954? The video of his speech, along with several other recordings of high school students from across the globe—Raul Contreras and his sharp views on prejudice included—were recently uploaded to YouTube by the Archive MC account.

Buenaventura shares that when his grandfather was alive, he would tell them stories of how his speech at the U.N. garnered the loudest cheers—but his only proof that it happened was a transcript published in a 1954 edition of the Reader's Digest. The magazine credits Antillon as an 18-year-old Philippine delegate to the New York Herald Tribune Youth Forum, a program established after WWII and organised by the newspaper. It was envisioned that bringing in students from all around the world, whether they were once enemies or allies, could promote world peace. It ran from 1947 to 1972.

Sidenote: If you have been sucked into the black hole that is the Archive MC account, you're no doubt familiar with the woman that moderates the discussions between the students. Her name was Helen Hiett Waller, a journalist and former war correspondent hired by The New York Herald Tribune to lead the forums.

What Became of Johnny Antillon?

Johnny Antillon, whose real name was Juan Blanco Antillon, was born to a Cuban father—one he lost to the Japanese bombings of Manila during WWII. Antillon would then go on to sell fish door-to-door to support his studies, sometimes walking all the way from Cavite to Manila and back, to pay for his studies recalls Buenaventura. In later years, Antillon would take his grandson to visit his father's grave in Sta. Scholastica, Manila.

Despite the hardships, Antillon graduated at the top of his class at the University of the Philippines Diliman, where he took up law. He never did graduate, according to the family tales Buenaventura shares, but would continue giving legal advice throughout his colorful career as a businessman. "He was really, really smart. Sobrang talino niya sa law, talagang ang talas ng utak niya," adds Buenaventura.

Antillon "was the guy who called the shots at the old Santa Mesa market." Buenaventura also recalls him being part owner of the now-closed Harrison Plaza. At some point before the economic crash of the '80s, Buenaventura recalls him owning a garment factory in Manila as well.

And as for whether Antillon ever lost his ability to captivate with his words? With the distinct accent from his native land of Calumpit, Bulacan, Buenaventura shares that "Ninety percent of the time, he would talk to us in English, that's really why I'm more comfortable speaking in English. He was really someone who valued English as a language that would help someone get somewhere in life."

Buenaventura cheekily admitted that he and his cousins would make fun of their lolo and his strong accent at times, "but he was so eloquent."

"He was very funny. He had a really good sense of humor and when he laughs, you know, it was just so full of energy," shares Buenaventura of how he remembers his grandfather. Buenaventura—now a freelance online English teacher possibly because of his grandfather's influence—shares that it was Antillon that took care of him and his sister. Antillon took many under his wings throughout his life, and he became known as "Popo" to all.

"My parents were pretty hard up in life so he accepted us with open arms. He was not strict, he was very lenient. He always did his best to provide for us."

Seeing his grandfather go viral more than a decade after he passed was one heck of a surprise for Buenaventura. By appearance alone, Buenaventura would not have recognized his grandfather—but he wasn't at all shocked by the contents of his speech.

Antillon and his generation were children of war. Buenaventura recognizes "the hardships that they had to endure. Not just that, but suffering through war and then having to find the motivation and the willpower to continue life—and to improve on it as well."

What is most touching for Buenaventura now, aside from seeing his grandfather as a young man rock the U.N., is the effect that Antillon's words have until now. No one knew "how he represented his country and the ideals of the youth," back when Antillon was alive. But now, as Buenaventura points out, "People are saying, 'Oh, I'm so inspired. He's such a great man to talk with such passion about his country,'" and that is further proof of Antillon's undying message.

Adventurer Savvy Seasoned Nostalgia History Johnny Antillon United Nations Un Staying In Heading Out Greener
Your Guide to Thriving in This Strange New World
Staying
In? What to watch, what to eat, and where to shop from home
OR
Heading
Out? What you need to know to stay safe when heading out