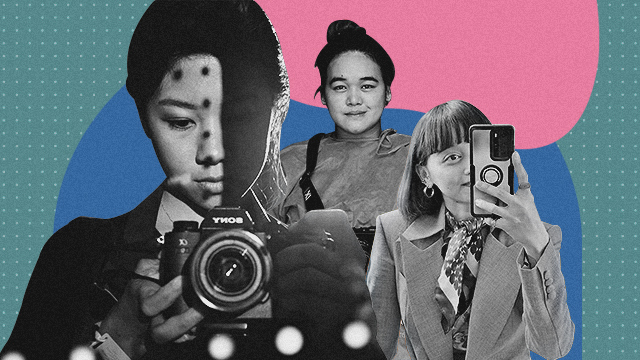 10 Filipina Photographers You Need to Follow If You Haven't Yet

We put the spotlight on these creative individuals.

(SPOT.ph) With the Filipino woman’s multitude of talents, it doesn’t come as a surprise that a number of our female photographers are making waves here and abroad. Their striking shots, whether a haunting photograph of war-stricken Marawi or a celebrity’s portrait in a glossy magazine, tell a story that goes beyond the page. If you’re looking to follow more female photographers online, we round up a few names to get you started. This is by no means comprehensive; and, if given enough space and time, it would definitely be longer than a list of 10.

Here are 10 Filipino female photographers whose works are worth checking out:

Manila-based photojournalist Hannah Reyes Morales explores themes of "diaspora, survival, and the bonds that tie us together," according to her website, by capturing seemingly mundane moments of daily living. Her photographs have appeared in The Washington Post, The New York Times, Al Jazeera, The Southeast Asia Globe, Newsweek Japan, and The Atlantic. In 2019, she received a grant from National Geographic to work on a documentary photography project titled "Living Lullabies."

Shaira Luna first became a household name when Promil's "gifted child" TV ads rolled out in 1995. She was then a little girl who spewed out anatomy-related facts as if she was a walking encyclopedia—a far cry to the accomplished photographer is now. Specializing in fashion photography, she often plays around with vintage clothing and period themes. Her book Playing Long After Us, which is a visual short-story collection told through her signature nostalgia-tinted photographs, was published by Summit Books in 2018.

Out Magazine in 2018 described Regine David's photographs to be "at once both voyeuristic and vulnerable." The American LGBTQ+ publication was especially referring to her works that champion queer visibility. David grew up in the Philippines, but left to pursue studies in photography at The Savannah College of Art and Design, where she was given the opportunity to travel from Hong Kong to France to New York. She moved back to Manila in 2016.

When it comes to food photography, the name Gabby Cantero usually pops up. Her crisp, vibrant photos have graced the pages of The Philippine Star's Let’s Eat Philippines, SM's Bite Guide, and CNN Philippines' Life. It's not surprising that Cantero found herself in the food industry; apart from being a food lover, she also studied culinary arts for a year. She has shot for restaurants, fast-food chains, and other consumer brands. This Sony Digital Imaging Ambassador now runs Studio Cantero, a team of creatives for photography, video, and content strategy services.

A documentary filmmaker and photographer, Lyka Gonzalez uses visual journalism to shed light on intersectional issues affecting women and marginalized communities. She has previously worked with the United Nations High Commissioner for Refugees, International Labour Organization, and SPARK Philippines. Gonzalez is currently a member of the United Nations Youth Advisory Board, representing the Youth in the Creative Arts and Informal Sector; and taking graduate studies in Women and Development at the University of the Philippines.

Food photographer Majoy Siason creates drama in her photographs by taking snapshots of a chef's hand searing a piece of meat or even just a bowl of hot soup with steam still rising. Her works have appeared on SPOT.ph, Yummy.ph, and Grid; and she's worked with food brands like Elephant Grounds and Ippudo. She also does portraiture, lifestyle photography, and videos.

Fashion and commercial photographer Charisma Lico has produced fashion spreads for Preview and Metro, fashion campaigns with Folded and Hung, and product shots for BLK Cosmetics and Cara Skin Care. She's worked with some of the biggest names in the city, including Kathryn Bernando, Georgina Wilson, and Isabelle Daza, to name a few. She started mounting shoots in high school, took up advertising in college, and started out by assisting freelance photographers.

Hailing from Dumaguete, Carmen del Prado uses the beauty and creative energy of her hometown to promote environmental awareness and marine conservation through photographs. Her works have appeared in Grid Magazine and Philippine Airlines' Mabuhay Magazine. She was a Sony Ambassador from 2017 to 2019.

Street and documentary photographer Xyza Cruz Bacani uses her work "to raise awareness about under-reported stories," according to her website. Her works document issues on labor migration and human rights, most of which are included in her book We Are Like Air that was published in 2018. Showcasing her trademark black-and-white photographs, the bilingual book features the tales of her mother, herself, and fellow female migrant workers in Hong Kong.

Currently a Manila-based contributing photographer for Reuters, Eloisa Lopez covers news around the Philippines and Asia and specializes in stories on human rights, women, and religion. Some of her famous works include documentations of the nightly killings across Metro Manila following the government's declaration on the "war on drugs." This started out as a personal project that later appeared in international publications like Time and The New York Times. She received a grant from The Pulitzer Center on Crisis Reporting in 2018 for the project "The Filipino Catholic Church in Crisis."

Photography Photographer Artists Adventurer Savvy Seasoned Filipino Philippines Guide Staying In Eloisa Lopez Xyza Bacani Carmen Del Prado Charisma Lico Lyka Gonzales Gabby Cantero Regine David Shaira Luna Hannah Reyes Morales
Your Guide to Thriving in This Strange New World
Staying
In? What to watch, what to eat, and where to shop from home
OR
Heading
Out? What you need to know to stay safe when heading out