Pitch Perfect 3 is happening, DOH says no toxic samples were found in that infamous milk tea, and more. 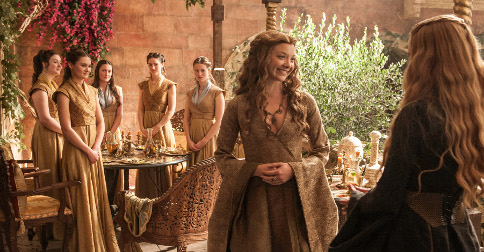 1. Four Game of Thrones episodes leak ahead of Season 5 premiere

The first four episodes of the latest season of Game of Thrones have found their way to online piracy sites ahead of the show's return to TV. The episodes were leaked to torrent sites on Saturday night (Sunday morning in Philippine time) and have been downloaded over 778,000 times.

Actress Rebel Wilson confirmed Monday that a third film in the Pitch Perfect installment is already in the works. While she has signed on, there's still no word if lead actress Anna Kendrick or the rest of the cast will return.

3. Ryan Reynolds hit by a car in Vancouver

Ryan Reynolds was the victim of a hit-and-run incident in Vancouver on Sunday, but don't worry! He wasn't injured. According to the actor's publicist, it was a paparazzo who was at the wheel when Reynolds was hit in an underground parking garage.

4. Kris is grateful to be "good friends" with ex, Mayor Herbert Bautista

Kris Aquino took to Instagram to express her thoughts on staying friends with an unidentified former flame. Despite not naming her ex, users were quick to conclude that she was referring to Quezon City Mayor Herbert Bautista. In case you forgot, she also once said that Bistek earlier proposed but broke up with her days later.

5. No more casinos for Willie Revillame in GMA 7

According to reports, Willie Revillame's new contract with GMA 7 prohibits him from gambling in casinos. He admitted that he went to casinos "for leisure," but denied that he had money problems because of gambling. His show Wowowin is reportedly airing later this month.

The Department of Health (DOH) announced Monday that preliminary tests did not find any toxic substances in the milk tea that killed two people last Thursday (April 9). Health Secretary Janette Garin said that they are looking at the case as a possible and isolated poisoning incident, but will be expanding tests to confirm the cause of death.

An earlier report has tagged the late teahouse owner's son as a suspect, with a statement from the family's helper saying the former "brought a foul-smelling liquid" into the store the night before the incident happened.

A Social Weather Stations (SWS) poll revealed that Vice President Jejomar Binay's public satisfaction rating has sunk to an all-time low in the first quarter of 2015. Despite falling under the "good" category at +31, his score dropped 13 points from December.

On Monday, Senator Antonio Trillanes IV accused two Court of Appeals (CA) justices of allegedly accepting a total of P25 million each to halt the suspension of Makati City Mayor Junjun Binay. According to Trillanes, CA Associate Justices Jose Reyes Jr. and Francisco Acosta allegedly received P20 million each to issue a temporary restraining order (TRO), and an additional P5 million each upon the issuance of a writ of preliminary injunction to stop Binay’s suspension.

9. 10 Al Fresco Restaurants Worth Sweating Out For

Yes, we know the summer heat is almost unbearable, but we promise that these 10 restaurants make the experience of dining outside worth it. Trust us, you'd want to sweat it out for really good food and ambience.

How many times have you cringed upon hearing "boom panes" for the umpteenth time? From "bipolar" to "edi wow," we list 10 expressions that people need to stop using.