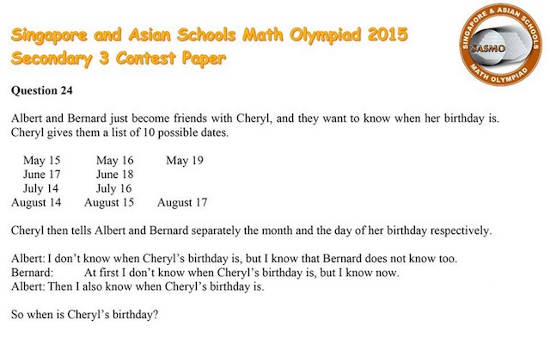 1. This high school math problem from Singapore has stumped the Internet

A high school math problem from Singapore has gone viral and stumped the Internet. The question was reportedly meant for 15- and 16-year-old "elite secondary school" students, and first appeared in an April 8 test organised by the Singapore and Asian School Math Olympiads (SOSMA).

A new mutant is joining the upcoming X-Men film! Olivia Munn will take on the role of the psychic Psylocke (also known by her human name, Betsy Braddock). The movie is set to hit theaters in May 2016.

3. Rumors of a Maja-Gerald breakup resurface

Rumors of Maja Salvador and Gerald Anderson calling it quits have resurfaced, after fans noticed that the couple did not spend the Lenten break together. Maja also posted a photo on her Instagram account with the cryptic caption, "...Nag-iisa lang ako noh [sic] kaya good luck!"

4. Justin Bieber was put in a chokehold and kicked out of Coachella

Reports say that Justin Bieber was put in a chokehold by security and kicked out of Coachella during Drake's closing performance. The pop star was refused access to the artist entrance area, despite having proper wristbands and a supposed "personal invitation" from Drake.

When a Coachella staff member came to assist Bieber, a security guard reportedly came up from behind and put him in a chokehold. A scuffle between Bieber's personal detail and festival security ensued, and the former's party was ordered to leave the event entirely.

Actress Heart Evangelista is opposing the recent Quezon City ordinance limiting pet ownership for its residents. In her Instagram account, she said that it "promotes dog/cat lovers to abandon their dogs no matter what age and how long they have had the dog/cat in their home [...] If people are imposed penalties or fees for having more than four pets, this may increase the incidence of pet abandonments."

According to the Committee to Protect Journalists (CPJ), the Philippines is the third most dangerous country for journalists with 77 deaths (after Iraq and Syria). Former Philippine Daily Inquirer journalist Melinda Magsino was shot dead in Batangas on Tuesday, the 32nd journalist killed in the country under the Aquino administration and the 173rd journalist murdered since 1986.

The Makati Regional Trial Court Branch 150 on Tuesday sentenced businesswoman Janet Lim Napoles to reclusion perpetua or at least 30 years in jail. Napoles was found guilty of illegally detaining her cousin and her former employee Benhur Luy for three months. She was also ordered to pay P50,000 in moral damages and another P50,000 in civil damages.

Makati Mayor Junjun Binay has filed a libel complaint against Senator Antonio Trillanes IV for having "publicly and maliciously" accused the mayor and his family of bribery and other crimes or irregularities "without factual basis." When reached for comment, Trillanes said he was "unfazed" and added, "...basta hahabulin ko sila hanggang makulong silang mga kurakot."

9. 10 Home Stores in Manila That Make You Want to Redecorate

Looking to spruce up your interiors? Here are 10 home stores in Manila that will help you transform your place into the nook of your dreams!

Local showbiz fans may have bid a sudden goodbye to The Buzz, but that doesn't mean we've forgotten all the juicy gossip and revelations the show has dished out for us. We list 10 shocking eksklusibong moments.