Star Wars confirmed to open on December 17, hotter days in Manila ahead, and more. 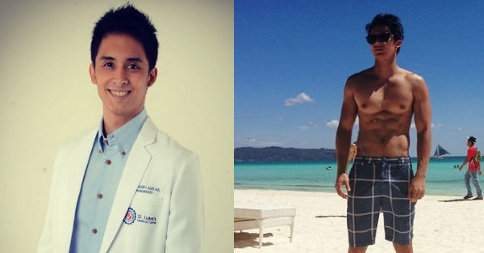 1. This guy has been dubbed the "most handsome ophthalmologist"

When was the last time you had your eyes checked? You'd probably want to now. Mark Agas, an ophthalmologist at St. Luke's Medical Center, has the Internet buzzing, thanks to his good looks. Proof? He was one of the bachelors in Cosmopolitan Philippines' annual hottest bachelors roundup last year. Don't get your hopes up, though! This hot doctor is off the market.

It's a great time to be a comic book fan. Just days after the official release of the new Batman vs. Superman trailer, fans now get a glimpse of another highly anticipated superhero movie: Fantastic Four. In this remake, we get to see how the four superheroes get their powers and team up to save a "former friend" who turns evil.

Sylvester Stallone is reportedly offering boxing champ Manny Pacquiao a role in the upcoming Expendables 4 movie, and the latter is supposedly "interested." Stallone is also looking to recruit Jackie Chan and wrestler Hulk Hogan to join the cast.

If you're stoked for the latest Star Wars installment but worried you'll see it late because of the Metro Manila Film Festival (MMFF), don't despair! The Force Awakens is slated to open in the Philippines on December 17 (a day before the U.S.), but will temporarily be pulled from theaters after December 24 to make way for MMFF. Regular screenings will resume after the festival ends in January.

5. This teenager is allergic to water

Yep, you read that right. This teenager named Alexandra Allen is one of 50 people in the world who have been documented to be allergic to water. The condition, called aquagenic urticarial, causes Alexandra to reportedly break out in hives every time her skin is exposed to water.

The Turin Shroud, a relic which many believe to be Jesus Christ's burial cloth, went on display to the public on Sunday for the first time since 2010. Over a million devotees have already booked their slots to get a glimpse of the cloth, which is currently on display in Turin, Italy until June 24.

7. LP vows to explain to people why Roxas should be next president

Senate President Franklin Drilon said Monday that the Liberal Party (LP) is set to explain why current Interior Secretary Mar Roxas "should become the next president." He also confirmed that the party is supporting Roxas, who reportedly "expressed interest internally."

The state weather bureau has warned the public of hotter days ahead, after Metro Manila experienced a sweltering 36.2°C on Saturday. PAGASA weather forecaster Manny Mendoza said temperatures may reach up to 40°C due to El Niño, particularly in General Santos, Cagayan, Tuguegarao, and Cabanatuan.

Going out of town this summer? We share with you 10 genius packing hacks so you can worry less about trying to make everything fit in your bag, and focus on more important things...like all the fun you'll soon have.

In case you haven't already heard, Dubsmash is the latest app to take the Internet by storm. Local celebrities were quick to join the craze, and we rounded up the 10 funniest Dubsmash posts for your viewing pleasure.