Beauty and the Beast completes its cast, rate rollback for Manila Water, and more. 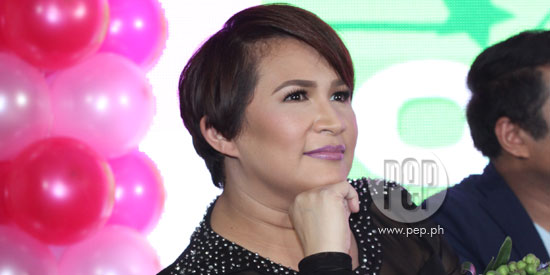 A few days after actors Gerald Anderson and Maja Salvador called it quits, another name has been thrown into the mix: Janice de Belen. The veteran actress was rumored to be the "third party" that caused the breakup, and she took to her Instagram to deny the allegations. Janice and Gerald last worked together in 2011, on the show Budoy.

YouTube star Mich Liggayu finally spoke out Tuesday night following allegations from Maricar Sebastian (mother of her late boyfriend, Jam). Maricar previously said Mich prevented access to her son's online accounts which are reportedly connected to the earnings from "JaMich." In a Facebook post, Mich did not directly address the claims but said that she was depressed, adding, "Oo pwedeng makita mo kong naka-smile, pero behind that smile...Sobrang laki ng pain. Sobra."

The upcoming live-action adaptation of Beauty and the Beast has finally completed its star-studded cast! Joining Emma Watson, Luke Evans, and Dan Stevens are: Emma Thompson as Mrs. Potts, Ewan McGregor as Lumiere, Sir Ian McKellen as Cogsworth, and Stanley Tucci as Cadenza. The movie is slated for a 2017 release.

If you've always wondered if Scotland's famous Loch Ness monster actually exists, Google is letting you join the search for the fabled Nessie. With Google's Street View camera, you can explore Scotland's lake where the monster is said to live. The initiative is part of the celebration of the iconic 1934 "Surgeon's Photograph" of Nessie that eventually sparked the legend we know today.

Manila Water consumers will reportedly get a rate rollback of P2.77 per cubic meter which will be reflected in their June billing. Customers can expect more rate cuts spread over the next two years. Maynilad consumers, on the other hand, will be charged an additional P1 per cubic meter.

Dalia Pastor is now on the wanted list of the International Police (Interpol) for the murder of her husband, race car driver Enzo Pastor. The Quezon City Regional Trial Court issued an arrest warrant against her in March, and authorities have already started their manhunt for her.

The Supreme Court (SC) has issued a temporary restraining order (TRO) against Commission on Higher Education/CHED Memorandum Order (CMO) No. 20 that abolishes mandatory subjects such as Filipino language and Literature in the current tertiary curriculum. The SC clarified, however, that the TRO only covered parts of the CHED memo order concerning Filipino and Literature subjects, and not subjects on Philippine Government and Constitution.

8. The 15 Things You Need To Stash Inside Your Office Drawer

Cosmo.ph shows you how to maximize that extra drawer in your office cubicle by filling it with 15 beauty essentials, perfect for a quick touch-up or last-minute party. While you're busy stocking up on those items, check out the 10 types of desk you see in an office. We're pretty sure you'd probably identify with one or two of them.

From entrepreneurs to philanthropists, these 10 high-society girls prove that there's more to them than their affluent lineage (and pretty faces).

10. 10 Cool Style-Bulok Lines You Can Use on Your Crush

Sometimes, cheesy and awkward works. You might not be the smoothest of the bunch, but these 10 lines are so pa-cute, you might actually score a date or two.