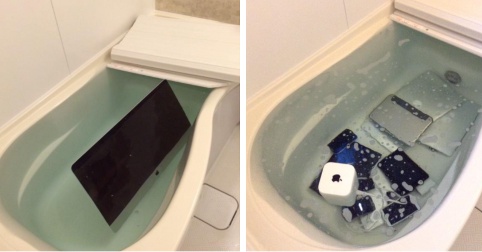 1. This girl submerged her cheating boyfriend's Apple gadgets in a tub

Here is a girl you definitely don't want to piss off. After discovering her boyfriend's alleged infidelity, a Japanese woman took all his pricey Apple gadgets and submerged them in a tub full of soapy water. What gadgets exactly, you ask? The pile includes an iPhone, two iPads, and a MacBook.

It's official! Actress Sandra Bullock is People magazine's Most Beautiful Woman for 2015. She reportedly laughed when she heard of the news and said, "I just said, 'That's ridiculous.'" On beauty, this is what the Oscar-winning actress had to say: "The people I find most beautiful are the ones who aren't trying."

3. An animated Spider-Man is coming

Reports say that Sony will be bringing an animated Spider-Man to the silver screen in 2018, and the movie will be directed by the duo behind The Lego Movie. Meanwhile, the live-action Spider-Man from Marvel and Sony is still happening, and is slated for release in 2017.

4. Another Pinay to replace Rachelle Ann in Miss Saigon

According to the Social Weather Stations (SWS), Senator Grace Poe has emerged as the top choice for vice president in the 2016 elections. The survey, conducted from March 20 to 23, showed that 26% of respondents preferred Poe as VP. Interior Secretary Mar Roxas ranked second with 12%.

Bureau of Customs (BOC) Commissioner John "Sunny" Sevilla has resigned from his post, just over a year since he first started the job. Sevilla admitted having difficulties in implementing reforms, saying, "Kapag gawin mo ang tama sa Customs, may risk kang kahaharapin." He also hoped that the official replacing him will continue the reforms he enacted at the BOC.

9. PHOTOS: 10 Manila Universities, Then and Now

Aside from churches, schools are some of the oldest standing structures in the country. We give you 10 universities that are rich in history, culture, and even ghost stories.

Before the age of Kindles and iPads, there was glorious paperback. From Nancy Drew to Sweet Valley, here are 10 young adult books we hungrily devoured from cover to cover.