Tony Award nominations are out, Bianca Gonzalez is pregnant, and more. 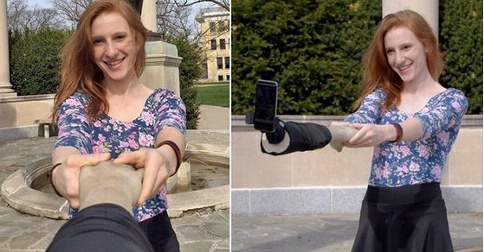 1. A "selfie arm" has been invented for lonely people

A pair of artists have taken the selfie stick to another level by inventing the "selfie arm." The fake arm provides lonely selfie-takers the illusion of having significant others as they snap the photo. It actually exists, but according to the website, it's just a "sarcastic solution" to the problem of looking alone while taking selfies.

The nominations for the 2015 Tony Awards were announced Wednesday. The list of impressive nominees include Bradley Cooper for Best Actor in a Play, and Helen Mirren and Carey Mulligan for the category's female counterpart. Other categories include Best Male and Female in a Musical, Best New Play, and Best New Musical.

3. Bianca Gonzalez and JC Intal are expecting their first child

Four months after tying the knot, host Bianca Gonzalez confirmed that she and husband JC Intal are expecting their first child. "I am three months [12 weeks] along the way and heartbeat is very strong and all is good and healthy," she said in a text message sent to her manager, Boy Abunda.

It looks like JC Padilla is following in the footsteps of his older brother, Daniel Padilla. JC was launched as part of ABS-CBN Star Music's "OPM Fresh" lineup. He clarified, however, that he has no intention of branching out into acting, saying, "Singer lang [ako] forever."

5. This adorable turtle has wheels for legs

A 90-year-old turtle that tragically lost its two front legs in a rat attack has been given a new lease on life. The handicapped turtle, named Mrs. T, was given a new set of wheels to replace her legs. Thanks to her new wheels, Mrs. T now moves twice as fast.

According to a survey from the Social Weather Stations (SWS), the unemployment rate (19.1% or about nine million Filipino adults) has decreased to its lowest since 2010. The rate in 2010 was recorded at 18.9%.

Mary Jane Veloso has been taken away from the execution island in Indonesia after being granted temporary reprieve. She was reportedly escorted back to her cell at Wirogunan Penitentiary in Yogyakarta. Veloso was spared from execution after President Aquino appealed to the Indonesian government to turn her into a witness.

The Palace downplayed the alleged tardiness of President Aquino for the leaders' photo at the Association of Southeast Asian Nations (ASEAN) summit in Malaysia. Communications Secretary Herminio Coloma explained that the President went to the restroom before the photo opportunity and clarified that he was "less than a minute late."

The statement comes after Singapore Prime Minister Lee Hsien Loong uploaded a photo of all ASEAN leaders lining up on stage with the caption, "Waiting to take traditional #ASEAN leaders’ photo but someone’s missing. #guesswho"

Taking the MRT is frustrating. Sometimes it's hopeless. Other times, it's worth it. You know what that sounds like? Love.

Yes, it's possible to have fun in Alabang without breaking the bank. We show you where to go and what to do in the south with just P800!