On its 20th anniversary, we look back on all the drama, skin, weddings, makeovers, and surprise cover girls from the magazine's past decade. 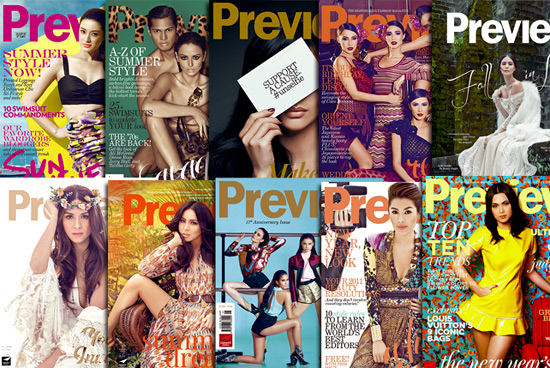 (SPOT.ph) Does the girl make the cover or is it the other way around? Regardless, these 20 Preview covers from the magazine's second decade made waves big enough for us to take notice, take pointers, and buy a copy. 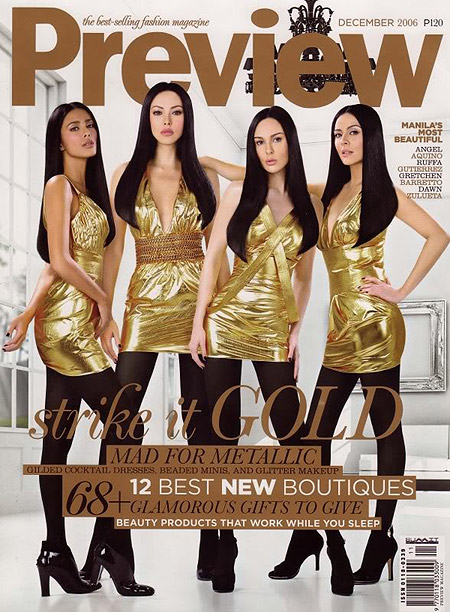 Spell D-R-A-M-A! The shoot for this cover was where Dawn allegedly got irked by Gretchen's prima donna, steamer trunk-toting ways. Not to mention the microwave La Greta brought in to heat her diet food. Sadly, the two beautiful actresses have yet to reconcile. 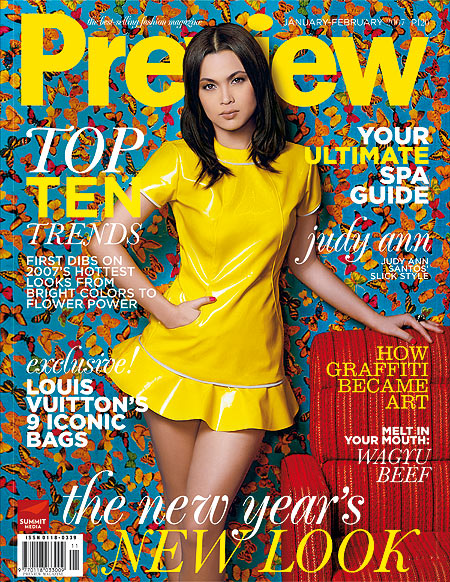 Good girls finish first! Judy Ann Santos stood out in a yellow dress that harked back to the mod movement of the '60s. It wasn't often that we saw Juday in such fashion-forward garb. On TV, she was always in character playing the poor girl fighting for her place in this world. And until that cover came out, her Esperanza wardrobe (a large T-shirt, printed skirt, and wallet clutched under her arm) was forever stuck in our memories. 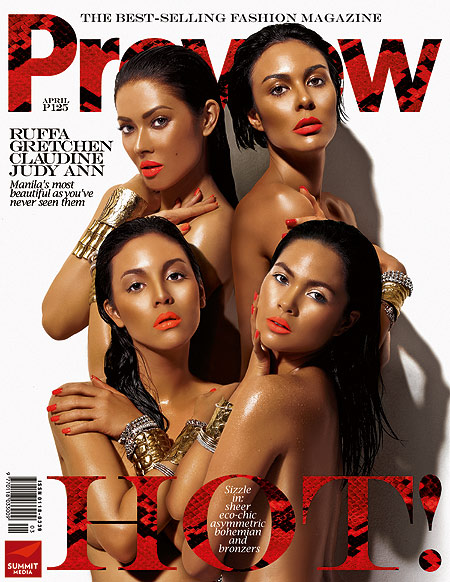 Neon lips and bronzer galore! A few memes sprung up after the cover came out—back when making spoofs was not as convenient as making memes today—proving that imitation is indeed the highest form of flattery. 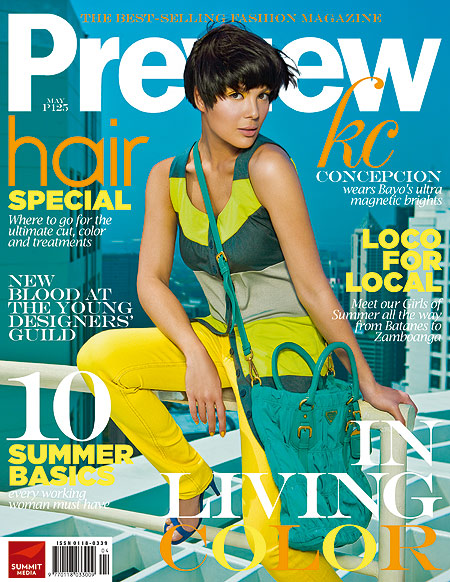 Forget Paris! Newly arrived KC Concepcion agreed to a high noon shoot in a bowl cut (a bob-styled wig worn in reverse) and blocks upon blocks of color. To the trained Sharonian eye, the hairstyle referenced the megastar's signature haircut from the glory days of The Sharon Cuneta Show. To the rest of us, it was but a portrait of a playful and adventurous ingénue. 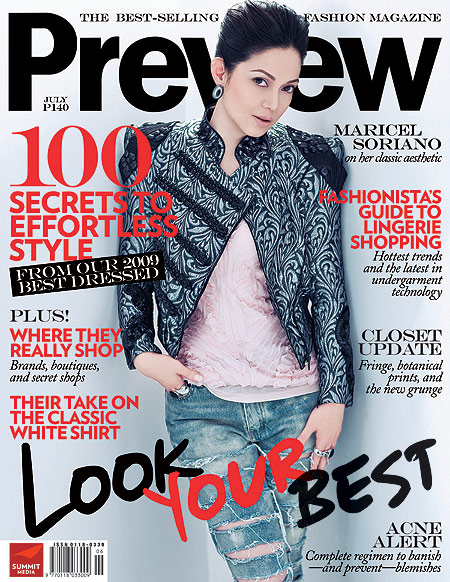 The Diamond Star surprised fans and observers alike by fronting the magazine's Best Dressed issue in a youthful combination of studded military jacket and ripped jeans. The inside pages revealed a portfolio that's more Ate Marya's sartorial aesthetic: minimalist Lanvin, Commes Des Garcon, and Jil Sander with Pucci prints thrown in for good measure. Nothing could be more Taray Queen than that! 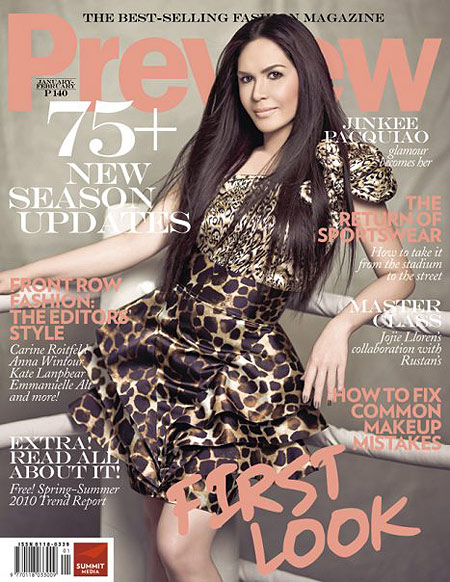 In this corner wearing couture: JINKEE PACQUIAO! Creative Director Vince Uy placed the cover girl in her own arena altogether, with a makeshift boxing ring paying homage to the sport that has made her husband a legend. This was Jinkee's very first fashion magazine outing—a validation of her new status as a style setter. 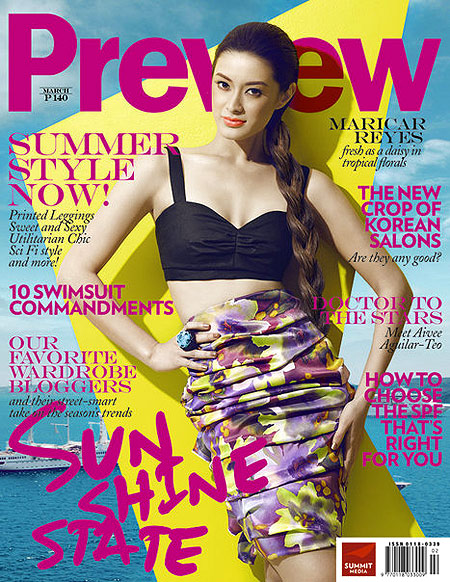 Maricar Reyes (post-scandal) is a crisis communication dream come true. The actress-doctor appeared confidently on the cover and spoke about her future in showbiz rather than regrets over her sex video. How she took her past in stride could compare to how luminous she looked in that season's florals. As in the cover blurb, Maricar was in a sunshine state indeed. 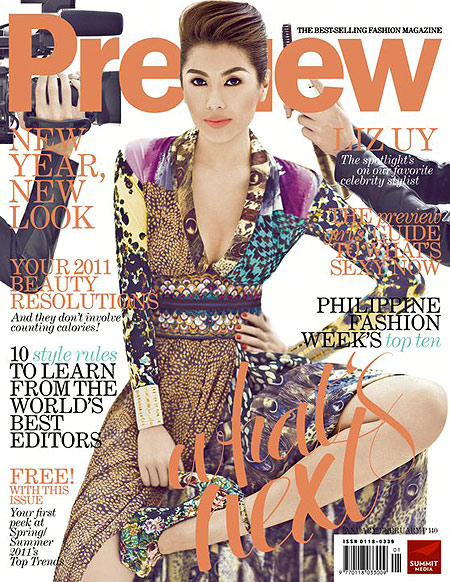 Never has it been editorial practice to put a staffer on the cover, but Liz Uy is one great exception. She was, at that time, already piquing public interest as stylist to the stars, John Lloyd Cruz's ex-girlfriend, and P-Noy's former date. Today, she has evolved into a brand: with endorsements, a book, and international exposure to her credit. 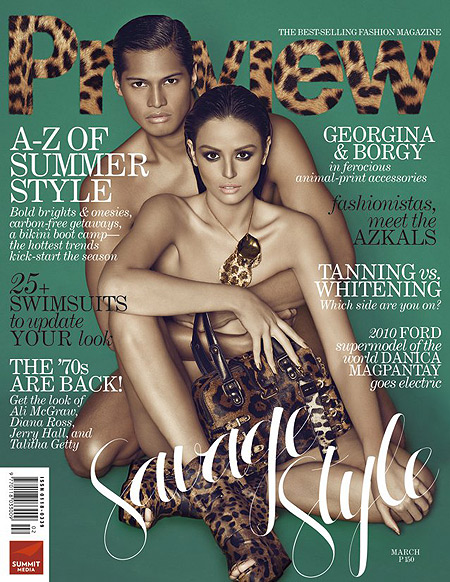 Skin is in! Underwear endorsers and real-life sweethearts Georgina Wilson and Borgy Manotoc stripped down to their bare essentials to showcase the season's latest animal print accessories. It was also the models' first time to admit that they were an item—Borgina, the “It” couple, as former Preview editor Raymond Gutierrez named the union. Borgina fell apart a few years after this cover but they're back in each other's arms as of last year. 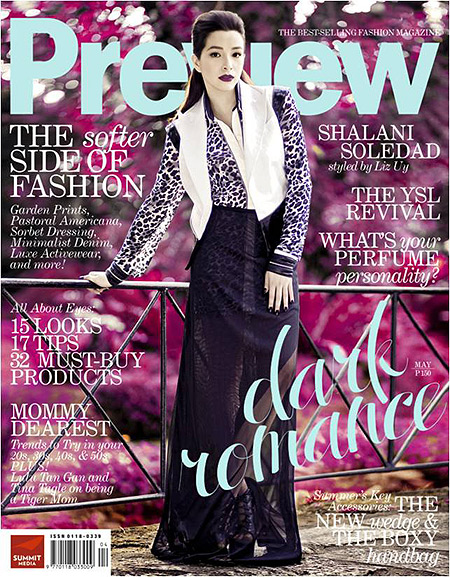 P-Noy's ex-girlfriend Shalani Soledad was making her own mark in showbiz as Willie Revillame's co-host in Wowowillie at the time this cover came out. The clincher? Fashion Editor Liz Uy (who was also rumored to have dated P-Noy) was responsible for this dark, romantic makeover. 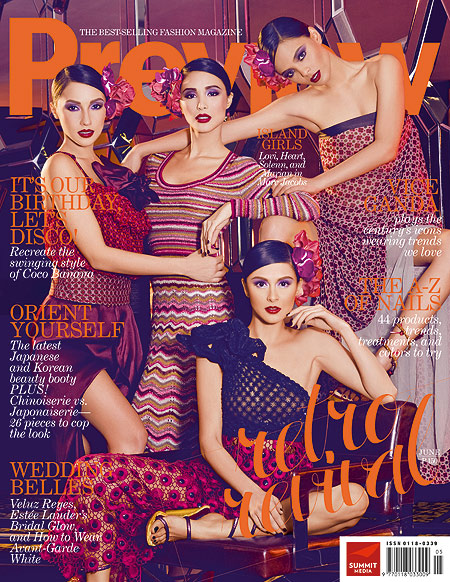 The four lead actresses of that year's remake of Temptation Island paid tribute to the disco era wearing flown-in Marc Jacobs. But that's not where the drama begins. Two of the cover stars, Marian Rivera and Heart Evangelista, figured in a well-witnessed argument that blew up at the NAIA two weeks after the issue hit newsstands. All the more reason to watch the movie and buy the magazine? Oh, yes. 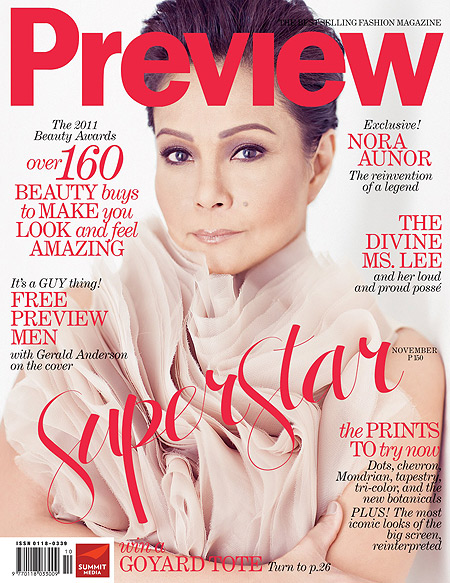 Home after a trying saga in the United States, Superstar Nora Aunor was a left of field choice for a fashion magazine cover. Decked in feminine frocks and all dolled up, this cover—along with an equally controversial cigarette-brandishing cover for YES! Magazine—set the ball rolling once again for the legendary actress. Nora Aunor has gained ground in her umpteenth return to show business. Critics the world over agree. 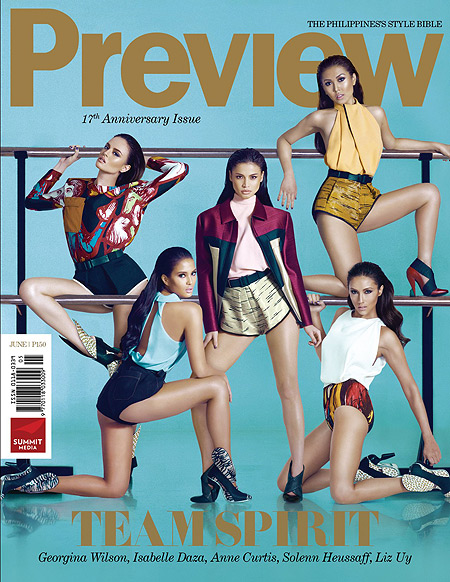 Love them or hate them, real life friends Anne Curtis, Belle Daza, Solenn Heusaff, Liz Uy, and Georgina Wilson showed team spirit and lots of leg in 2012's anniversary cover. The five "It" girls also offered something for the masses to recreate: a viral “Call Me Maybe” video that included everyone else in their good-looking barkada.

Is that comedienne Melai Cantiveros sharing precious cover space with Kathryn Bernardo and Jessy Mendiola? Why, yes! Whoever said that fashion magazine covers are only for models, ingénues, and icons is missing out! 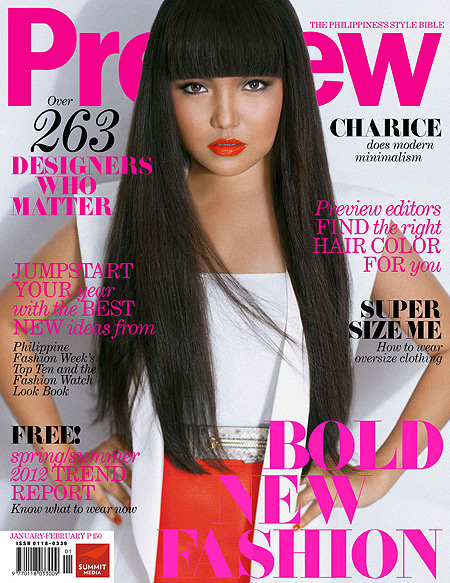 The most unlikely of cover girls, Charice was made to wear the season's latest brights and statement stripes—a grown-up Sunshine Corazon, if you will. The evening news caught on and went as far assessing the state of Photoshop use in local publishing. Years after, Charice came out as a lesbian—with girlfriend in tow—and has gotten rid of her cover alter ego's long locks, china chop bangs, and designer dresses. 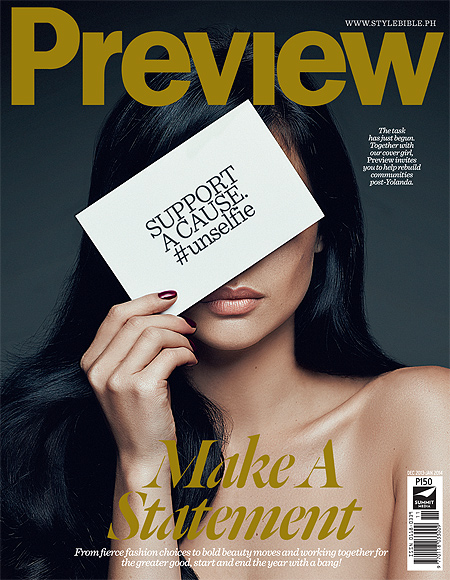 Anne Curtis, the girl with the most Preview covers, hid her face (save for those luscious lips) in the name of public service following Typhoon Yolanda's massive destruction. Though really, we wonder what's more controversial: the #unselfie or the Prive scandal that the cover girl figured in as this particular issue hit the stands. Juice cleanse worshippers, beware. 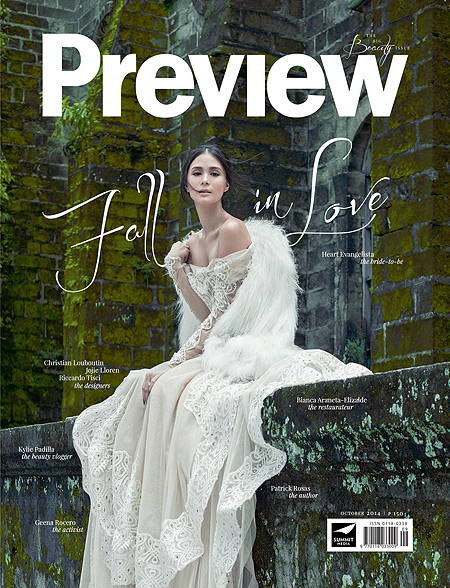 Each time Heart falls in love, it sort of becomes an issue. At the time this was shot, she was preparing for her wedding to Senator Chiz Escudero. And the issues that came with it! The wedding plans in both Balesin and Manila, and the eventual snub of Heart's parents for both celebrations. But on to the good side: Heart and mom Cecile baked polvoron together in early May and Chiz has been introduced formally to Heart's parents. Everybody happy. 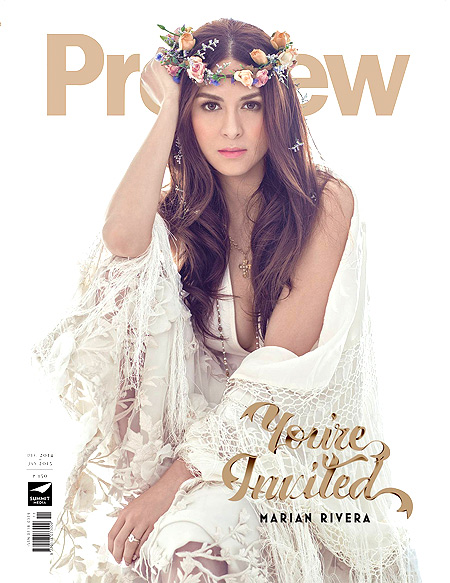 Strategically released on the same month as the local "Royal Wedding of the Century," Marian Rivera wore all kinds of bridal looks for a most unforgettable Preview year-ender. The issue was a hit. And the wedding? Newsworthy, of course—bishops, entourage, gown, musical reception, production design, and all. 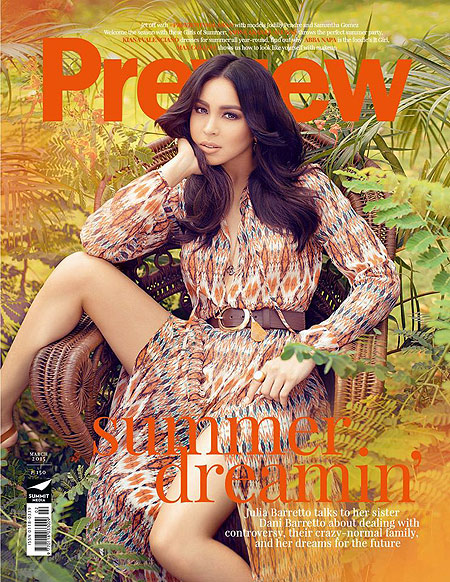 On the month of Julia's 18th birthday and second Preview cover, her mom Marjorie and aunt Gretchen were not on speaking terms. Even more, La Greta left for London to spend time with Dominique, fanning the proverbial flame even more. Julia’s other aunt, Claudine was at the heels of a comeback and made her own debut at Julia's fete. A couple of years back, during Julia's first Preview cover, it was her mom Marjorie and aunt Gretchen who were on the same team against aunt Claudine. The verdict? Drama, aside from beauty and talent, is a Barretto heirloom.