Toni Gonzaga dishes on her wedding, Godzilla is now a Japanese citizen, and more. 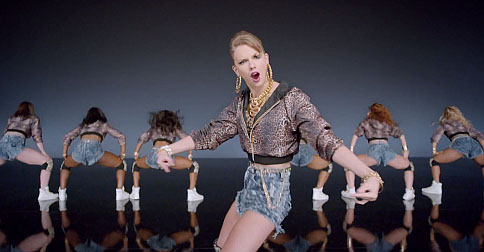 You've probably never heard Taylor Swift's "Shake It Off" like this before. New Jersey punk band Screaming Females has covered the catchy hit song, replacing the peppy, sick beat with a...er, much louder approach. This isn't the first time the band has covered an unlikely song. They previously did a punk rendition of a Sheryl Crow song.

2. Toni Gonzaga dishes on her wedding

Although Toni Gonzaga has mostly kept mum on when she will walk down the aisle, she shared in an interview that she wanted a church wedding in her hometown of Taytay. Why? Sentiment, of course. "It's a little tricky holding the ceremony in the church I grew up in Taytay, but that's where I had a lot of my firsts. It's where I first sang, it's where I [was] first told I could start a singing career," she said. "It's also my parents' dream to see me marry in that church, so I want to make it happen."

We also know that her sister Alex will be her maid of honor, and that she will be wearing a wedding gown by designer Vera Wang.

Since longtime 24 Oras anchor Pia Guanio has announced she will be leaving the program, viewers noticed that singer-slash-actress Julie Anne San Jose has been temporarily hosting the "Chika Minute" segment. This isn't final, however, and Julie Anne has expressed her willingness to take over. Other names being floated around include Iya Villania and Megan Young.

You might remember Enrique Iglesias injuring his hand during a concert after he grabbed a camera-equipped drone onstage. Reports now say that he will need weeks to fully recover, after undergoing surgery for his fracture and hand reconstruction. A statement said that he is expecting a full recovery.

5. Godzilla is now a Japanese citizen

It's official. Godzilla (yes, we mean the monster) has been awarded an honorary citizenship by Tokyo’s Shinjuku ward earlier this year, with his paperwork finalized just last week. He will also serve as Shinjuku's tourism ambassador.

Here's a bit of good (and adorable) news for you today. About 97 baby sea turtles (also known as pawikan) were released into the waters of Davao City. Experts estimate only two percent of the baby turtles have a good chance of surviving after their release, so we wish them the best of luck out there in the wild. Watch the video above for a dose of baby turtle cuteness.

According to former Comelec chair Sixto Brillantes Jr., Senator Grace Poe cannot be disqualified from the 2016 elections based on her residency status since she was born in the Philippines.

We're only halfway through the year, and there's still so much to look forward to in Manila. CandyMag.com rounds up 10 musical acts still set to hit the stage this year, from Maroon 5 to Ariana Grande.

9. 10 Pinoy Films to Get You in the Mood for Independence Day

June 12 is right around the corner, so we decided to commemorate the brave men and women who fought for the freedom we have and enjoy today. Here are 10 bayani movies that will gear you up for Independence Day.

10. 10 Hangouts for Musicians in Manila

Looking to meet or watch your favorite local indie artist? We give you a handy cheat sheet of where they play, where they eat, and where you can "accidentally" bump into them.