The new "Macbeth" trailer, a possible Binay-Erap tandem in 2016, and more. 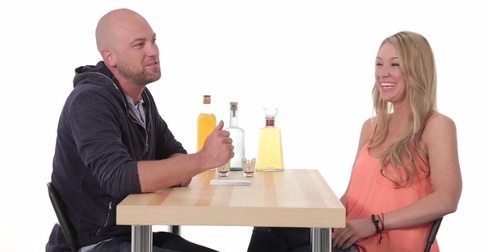 1. Watch exes play an awkward game of Truth or Drink

2. Leonardo DiCaprio teams up with Michael Bay for new project

No, Leo isn't starring in the next Michael Bay movie...thankfully. The unlikely duo are producing an upcoming film on the Rwandan national biking team. Specifically, it revolves around Jacques "Jock" Boyer, the first American cyclist to race in the Tour de France.

3. Chiz Escudero and Heart Evangelista to renew vows in 2016

Chiz Escudero has confirmed plans to renew vows with Heart Evangelista in 2016. According to reports, the small ceremony will be held in their Quezon City home, and this time, Heart's parents will be part of the ceremony.

4. Watch the first trailer of Macbeth

Head's up, movie fans. The first trailer of the highly anticipated Macbeth has dropped. It stars Michael Fassbender as the titular Scottish lord who will stop at nothing to become king, and Marion Cotillard as the ambitious and power-driven Lady Macbeth. The movie premiered to rave reviews at this year's Cannes Film Festival.

5. The search is on for Pangako Sa 'Yo's Beabianca

Star Creatives, the producer behind Pangako Sa 'Yo, announced Thursday that auditions are currently being held for the character of Beabianca (originally portrayed by Vanessa del Bianco in the original series). Beabianca is the woman who comes between Angelo (Daniel Padilla) and Yna (Kathryn Bernardo).

You'll never feel sepanx from the infinite stream of news, selfies, and everything in between as Facebook Inc. launches a new app that specifically caters to the needs of people with slow mobile Internet. Facebook Lite is currently only available for Android and will have the same features as the regular Facebook app, save for videos and advanced location services.

The President has had it with the rather petty attacks on character between the two leading presidential candidates in the polls, Senator Grace Poe and Vice President Jejomar Binay. President Benigno Aquino III spoke to the Philippine media delegation in Japan on June 5 and said that the debate about the country's future should be at a "more intelligent and studied level" instead of merely a squabble between citizenship and residency.

Vice President Jejomar Binay told reporters Friday that he is open to having Manila City mayor and former President Joseph Estrada as his possible running mate come 2016. When asked if Estrada is amenable to the tandem, Binay answered, "Sa tingin ko." The two previously ran for office in 2010, with Estrada seeking the presidency.

Everyone's crushing on Miles Teller after Whiplash, but who else made Town & Country's list? They threw in some pretty cute men with highly impressive resumes and inspiring hobbies in there. Check it out.

We've got the infinite selfie, the oversharer, the perpetually #blessed on our list. Which ones do you see on yours?