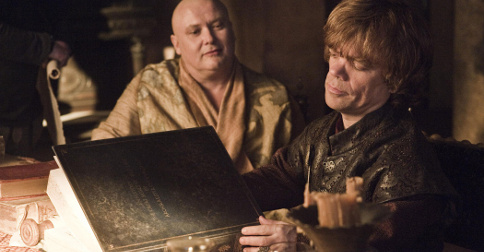 1. Game of Thrones is getting its own coloring book

We hear adult coloring books are all the rage these days, and you can't get more "adult" than with a Game of Thrones coloring book. We still don't know if this will hit local shelves, but we do know that it features 45 different illustrations to satisfy all your coloring needs. And nope, you won't be coloring in "extreme depictions of sexual violence and torture."

Congratulations are in order for Ryan Agoncillo and Judy Ann Santos. On an episode of Eat Bulaga which aired on Tuesday, Ryan confirmed that they will soon welcome a third child. The couple also took to their Instagram accounts to post a photo that said, "Positive."

Daniel Matsunaga has addressed rumors that his family allegedly approves of his girlfriend Erich Gonzales because of her supposed generosity when giving gifts. Referring to a blind item, he said, "Super hindi totoo eh. I don't know where they're getting all these things." He also denied speculations saying that he was the reason for Erich's breakup with her previous non-showbiz boyfriend.

You've probably heard previous reports on Katy Perry releasing a new song against Taylor Swift entitled "1984." (A supposed dig against Taylor's 1989 album.) In a statement from Katy's camp, they said, "Katy Perry’s managers at Direct Management Group confirm that this story is completely false. Katy Perry was not involved in writing, singing, recording or registering this song."

5. Listen to Leighton Meester sing a cover of The Cardigans' "Lovefool"

We know it's not Thursday yet, but you can still channel all those nostalgic feelings, thanks to Blair Waldorf crooning a cover of The Cardigans' "Lovefool." The performance is part of The AV Club's "Undercover Series." Go ahead, sing along and reminisce.

South Korea's health ministry reported 13 new Middle East Respiratory Syndrome (MERS) cases and two more deaths. This totals the number of fatalities to nine and patients to 108. South Korea's infections have all been traced to a man who developed MERS after returning from a trip to the Middle East in early May, and who came into contact with other patients at a hospital before being diagnosed.

Justice Secretary Leila de Lima said she has yet to decide if she will run for the Senate in 2016. "It is very humbling, pero mahirap naman mag-desisyon sa mga ganiyang bagay," she said. "It has to be really my own decision para kung magsisisi ako, sarili ko lang sisihin ko." It has previously been reported that de Lima is one of the senatorial candidates of the administration's Liberal Party.

8. The Palace says Purisima has no more role in the PNP

Malacañang clarified on Wednesday that resigned PNP Chief Alan Purisima has no more roles in the organization. "He has no responsibility anymore in the Philippine National Police, in the line organization. He does not hold any position," said Presidential spokesperson Edwin Lacierda. The Palace has yet to appoint a replacement for Purisima.

9. 10 Hair Products for Every Hair Type

Whether you're suffering from split ends or you were born with crazy frizz, we found 10 hair products that will help you manage whatever type of mane you have.

You're probably all set for another long weekend, but why not make it a bit more meaningful with a quick history lesson or two? Here are 10 events that will get you started.