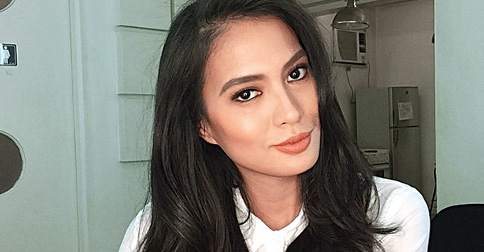 After Siquijor vice-governor Dingdong Avanzado previously called for an explanation from Isabelle Daza on her #SiquiWhores hashtag, reports now say that the latter has apologized. In a Facebook post Wednesday afternoon, Avanzado said, "[She] has already explained that the hashtag ‪#‎siquiWhores‬ was merely 'a joke' and is a 'term of endearment' between her and her cousins. Likewise, she apologized to the people of Siquijor who may have been offended by such a term. I encourage the netizens and the people of Siquijor to accept her apology, move on, and focus our time and efforts on more important concerns that our nation faces today."

He did not disclose how and when Isabelle contacted him.

In an interview during Tuesday night's Gawad Urian Awards, Angelica Panganiban denied rumors of splitting with boyfriend, John Lloyd Cruz. "Hindi, parang tanga lang ang gumagawa ng ganoon," she said. Angelica added that she was in a hurry to finish the interview because she was picking up John Lloyd from the airport.

Nora Aunor went home with the Gawad Urian Lifetime Achievement Award during Tuesday night's ceremony for her work in Philippine cinema. She was, however, bested by Eula Valdez for the latter's performance in Dagitab. Other winners include Allen Dizon (Best Actor for Magkakaubang), Lav Diaz (for Best Director), and Mula Sa Kung Ano Ang Noon (for Best Picture, Best Screenplay, and Best Editing).

4. Jennifer Lawrence and Chris Pratt are doing a movie together

Thank you, movie gods. Reports say that Jennifer Lawrence and Chris Pratt are in talks to star in an upcoming sci-fi romance called Passengers. Morten Tyldum (The Imitation Game) is set to helm the film. So far, no plot or release date has been announced.

Filipino Muslims will begin observing the holy Islamic month of Ramadan on June 18. During the month-long activities of fasting and prayers, Muslims abstain from eating during daylight hours from dawn to sunset.

Real estate mogul and TV personality Donald Trump announced Wednesday that he will be joining the 2016 U.S. presidential election. In a long speech declaring his bid for the Republican nomination, he reportedly accused Mexico of sending rapists and other criminals to live in the United States, and attacked fellow Republican runner, Jeb Bush.

Property developer DMCI Homes suspended construction work at Torre De Manila, a day after the high court issued a temporary restraining order against the controversial project. The workers, who supposedly missed the advisory ahead of their shift, were later allowed inside to get their personal belongings. Reports say that about 2,000 people could lose their jobs.

9. 10 Movies and TV Shows That Lied to You About Adulthood

So you're finally an adult, and you're quickly realizing that it's not as awesome as fiction made it out to be. We list 10 movies and TV shows that gave you false hope about the joys of adulthood.

Father's Day is right around the corner. If you're still scrambling to find the perfect gift, we have 10 cool ideas to show your dad some appreciation.