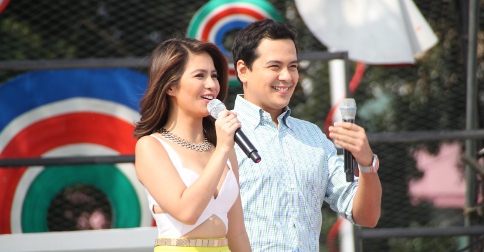 Just so we're clear, it's not going to be a Tabing Ilog reunion (yet). It's not a new movie, either. Instead, the former love team will be starring in an upcoming episode of Maalaala Mo Kaya. No plot details have been released, but the episode will air this Saturday (June 27).

You might remember previous reports of Bianca King admitting that ex-boyfriend Dennis Trillo broke up with her over text. In an interview, she said that she had "no hard feelings" over Dennis and Jennylyn Mercado's alleged rekindled romance. She added that she was happy for them and continued, "Even before pa naman, iniisip ko na bagay sila. Parang 'yong hitsura nila, personality-wise, they like the same things, mga ganoon."

Gmail now boasts an add-on feature that lets you unsend all those awkward and embarrassing emails, but there's a catch. You've only got 30 seconds to do it or else the email is gone...probably like your dignity. Don't forget to actually turn the new feature on.

If you've ever wondered what Magic Mike would be like if kids wrote it, look no further. The Tonight Show host Jimmy Fallon invited Channing Tatum to join the Kid Theater segment, and the results were hilarious. The two performed a script written by eight-year-olds who were given nothing but a title: Magic Mike.

Goodbye, Andrew Garfield. Hello, Tom Holland. The 19-year-old Brit has officially been cast as the new Spider-Man after two separate screen tests with Chris Evans and Robert Downey Jr. The actor will make his first appearance as the web-slinging superhero in the upcoming Captain America: Civil War movie, and will later have three solo films.

After reports saying Senator Grace Poe has topped the latest Social Weather Stations (SWS) survey on presidential candidates, a new SWS survey revealed that she is also the top choice as Vice President. Twenty-one percent said that they would likely vote for Poe, while 12% said they would go for Interior Secretary Mar Roxas. Senator Chiz Escudero and Vice President Jejomar Binay both came in at third with 7%.

8. Your Meralco bill for July may be delayed

Meralco customers may experience delays in getting their bills for July in order to wait for approval from the Energy Regulatory Commission (ERC). The company requested that they be allowed to reduce the distribution charge by P0.16 per kilowatt hour (kwh) before billing customers. The ERC said Meralco will have to wait for its decision, which is expected to come out on July 10 or 13.

In a column in the Philippine Star, National Arist F. Sionil Jose wrote, "I know now that in the event of a war with China, many of our ethnic Chinese will side with China so I will not ask anymore on whose side they will be if that war breaks out." His statement naturally caused an uproar. This is what Clinton Palanca had to say.

We heard the "hipster" is dead. In its place is the new "Young Urban Creatives," also known by its shorter name, Yuccie. We took it upon ourselves to come up with alternatives.