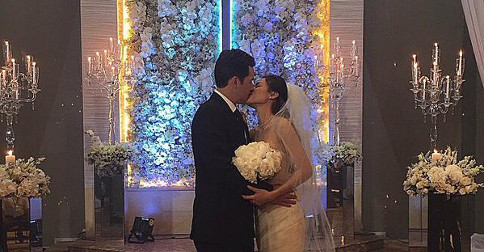 Junjun Binay is suspended (again), it's a girl for Dingdong and Marian, and more.

Prepare your tissues, this one's a tearjerker. Videographer Bob Nicolas has unveiled what went on at Toni Gonzaga and Paul Soriano's highly publicized wedding on June 12. The seven-minute clip shows the wedding ceremony in Taytay, Rizal, which was attended by the newlyweds' friends and family.

2. It's a girl for Dingdong and Marian

Congratulations are in order for celebrity couple Dingdong Dantes and Marian Rivera. The former took to Instagram on Saturday to share that they were expecting a baby girl. The couple first announced their pregnancy in April, with multiple reports saying Marian is currently nine weeks into her pregnancy.

The modern remake of Pangako Sa 'Yo has found their new Bea Bianca. Newcomer Sarah Carlos bested almost 200 hopefuls from around the country to score the role once portrayed by Vanessa Del Bianco. In the original series, Bea Bianca was the other girl who came between Angelo and Yna. Director Olive Lamasan explained why they chose Sarah, saying, "Sabi ko sa kanila, we're giving you time to think. Kung hindi okay sa iyo ang magpa-sexy, to wear bikini or swimsuits, kung ayaw n'yo ma-bash kasi third wheel kayo sa Kathniel love team, then this is not for you. Among the six, siya ang ayaw nang mag-isip. She was already ready."

4. Husband plans second wedding for wife after she loses memory

A man named Jeremy Stamper from the U.S. is planning a second wedding for his wife after she lost her memory in a car accident. "She said to me, 'I don’t want you to be mad, but I do not remember the wedding,'" he explained. "I, of course, was very upset, but I told her right then and there, 'We will do it again.'" They are already planning their celebrations, but are also asking for donations to make it more spectacular.

5. The next iPhone may get a dual lens camera

According to CBCP President and Lingayen-Dagupan Archbishop Socrates Villegas, the Church will study the implications of the U.S. Supreme Court's decision to legalize same-sex marriage. "The U.S. Supreme Court decision will not go unheeded. We shall study it with assiduousness, and revisit our concepts and presuppositions, always with an eye to being faithful to the Gospel and to the mission of the Church," he said in a statement on Sunday.

He added that the Church will always maintain that marriage is a "permanent union of man and woman."

...again. The Makati Mayor and 14 other officials have been sentenced to a six-month preventive suspension in connection to the allegedly overpriced Makati Science High School building. The Office of the Ombudsman said its personnel tried to serve the order to Mayor Binay earlier today, but he and his staff refused to receive the copy.

President Benigno Aquino III on Monday led the ceremony for the "world's first resort airport" in Cebu. According to the Department of Transportation and Communication (DOTC), the project includes the construction of a new international passenger terminal building at the Mactan-Cebu International Airport and the renovation of the existing terminal. Construction of the new terminal is scheduled to be completed by 2018 while the renovation is slated to finish in 2019.

Fifty Shades of Grey author E.L. James delighted fans with the release of Grey, a retelling of the first book through the eyes of Christian Grey. We combed through its pages to find the funniest, most ridiculous, and most of all, dirtiest lines for your amusement.

10. Fashion, Food, and Art at the Preview 20th Anniversary Gala

Do fashion folk eat? What is "creative black tie?" We scoured the red carpet, exhibit, and service kitchen of Preview magazine's 20th Anniversary Gala for answers.