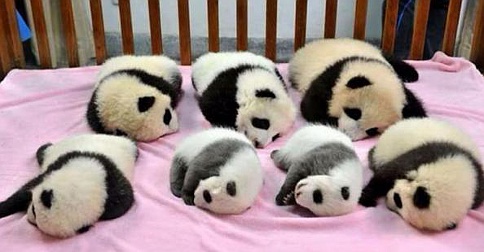 First of all: Where do we sign up?!! The Giant Panda Breeding Center in Chengdu, China has one job—to increase panda population using a combination of natural and artificial insemination methods. The center has been around since 1987.

2. Is Richard Gutierrez moving to ABS-CBN?

When Richard Gutierrez appeared on an episode of Kapamilya Deal Or No Deal on June 29, fans wondered if he was making the move to the network. "Hindi ko alam, pero technically kasi 'yong It Takes Gutz To Be A Gutierrez, in-acquire ng TFC [The Filipino Channel]. Technically, 'yong show namin ay nasa Kapamilya Network," he said. "Freelance naman ako, wala namang magagalit na network." He added that he was open to working with talents from the network.

He added that he will continue to pursue his case of serious illegal detention against Cedric, Zimmer, and Deniece.

Kiefer Ravena has confirmed parting ways with now ex-girlfriend, Mika Reyes. He declined to give more information, saying that he's "not in the position to talk about it." He also denied rumors of a budding romance with Jasmine Curtis-Smith, adding, "We [were] schoolmates for a year, and there's nothing more than that."

A 6.1-magnitude quake struck off the southern Philippines on Friday, and was felt in Mindanao's northeast tip as well as in a nearby Leyte island. There were no immediate reports of damage or casualties after the undersea quake struck at 2:43 p.m.

U.S. health officials confirmed that a Washington woman died from measles, the first death in the country since 2003. According to the Washington State Department of Health, she lacked common symptoms which led to the infection only being discovered during autopsy. Officials didn't specify whether she was vaccinated, but noted that she had a "compromised immune system."

A motor banca bound for Camotes Island in Cebu province capsized off Ormoc City port shortly after noon Thursday. The death toll has risen to 40, while at least 10 have been reported missing since noon Friday. A preliminary investigation suggests human error after the wooden ferry made a sharp right turn soon after it left port in Leyte province. Panicked passengers crowded the right side of the ferry, causing it to tilt before capsizing.

He will also file charges against United Nationalist Alliance (UNA) secretary general Attorney JV Bautista and lawyer Harry Roque, who were present when he was confronted by Binay.

Some of us are lucky to have jobs we actually enjoy. The rest of us? Well, we're stuck dealing with a Miranda Priestley on a daily basis. We rounded up 10 things you probably want to say to your boss.

It's finally Friday! Wrap up the work week with a smile on your face, thanks to these fun Pinoy puns that will make your day.