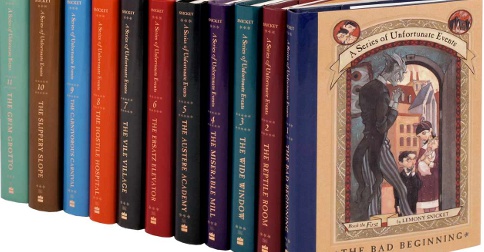 1. Watch the teaser trailer for Netflix's A Series of Unfortunate Events

Alright, so it's just 36 seconds but it's enough to get avid fans of the popular series excited. The trailer was uploaded by a YouTube account named "Eleanora Poe," one of the characters from the books. It is also in keeping with the author's style of blurring the lines between author and text. (You'll see the Netflix logo at the end of the trailer.)

2. Piolo Pascual and Toni Gonzaga to star in new soap

Yes, they're coming to TV and they're not alone. They will also be joined by Sam Milby and Jolina Magdangal. The new show, entitled Written in Our Stars, is described to be "wholesome, family-oriented, and full of family values." Filming is slated to begin July 28.

4. A Hello Kitty movie is in the works

Still on the fence about whether Hello Kitty is a cat or a little girl? Maybe a movie with the popular Japanese character would settle the debate once and for all. Sanrio, which has the rights to Hello Kitty, is looking to develop a movie slated for release in 2019. So far, no further details have been released but reports say the company would likely spend between U.S. $162 to U.S. $242 million on the project.

Reports say that Chinese government researchers are using chickens, fish, and toads to predict earthquakes. Nanjing's seismological bureau has transformed seven animal farms into seismic stations, where breeders report to the former on the animals' behavior. Possible abnormal behavior could indicate imminent earthquakes, such as chickens flying atop trees or fish leaping out of water.

According to the LTFRB, all public utility buses (PUBs) will now be required to install global positioning system (GPS) devices starting September. Once registered using a unique ID assigned to each device, the GPS will allow the LTFRB to locate any PUB and monitor its speed. Bus operators who fail to install GPS devices will be fined P5,000 per unit. An additional penalty of P1,000 per unit per month will be imposed after a grace period of 30 days.

The Department of Health has confirmed that a foreigner from the Middle East has tested positive for MERS, or the Middle East Respiratory Syndrome-Coronavirus (MERS-CoV). The patient is currently confined at the Research Institute for Tropical Medicine in Muntinlupa City. In February, a Filipina nurse who arrived from Saudi Arabia tested positive for the virus, but was cleared a month later. The DOH has declined to disclose when the patient arrived in the country.

The death toll from the Ormoc City ferry has risen to 61, indicating that the vessel was overloaded. Coast Guard figures showed that 61 people died when the wooden Kim Nirvana capsized, with at least 145 people listed as survivors. This means at least 206 people were aboard, exceeding the 194 passengers and crew the boat was authorized to carry. The boat's owner and crew have been charged with murder.

9. The 10 Professors You Meet in Class

Yes, you've probably seen them all. From the cute one whose class you never miss to the terror who made you quake in fear, we rounded up the 10 professors you meet in class.

10. 10 Manila Essentials for the Rainy Season

It's the rainy season! We give you a handy list of 10 essentials you need to survive the dreary Manila weather.